Partners aim to show that continuous olefin production is possible using electricity as a heat source.

BASF, Sabic and Linde have begun construction of what is said to be the world’s first demonstration of electrically heated steam cracker furnaces. BASF and Sabic are investing in the project, which will be fully integrated into a steam cracker at BASF’s Ludwigshafen Verbund site in Germany. Linde will provide engineering, procurement and construction services, and in the future will commercialise the new technologies. The demonstration plant will be operated by BASF and is slated to start up during 2023.

The project was originally announced during the first quarter of 2021, when the partners said that they had been jointly working on concepts to use renewable electricity instead of fossil fuels for heating steam crackers. Development of this novel furnace technology is being supported by the German Federal Ministry for Economic Affairs and Climate Action with funds of €14.8 million. 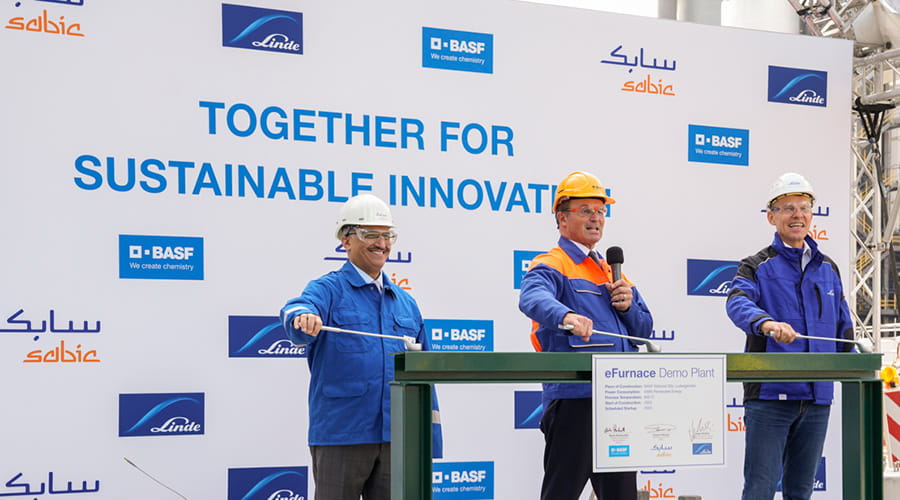 Yousef Al-Benyan, Vice-Chairman and CEO of SABIC, Dr. Martin Brudermüller, Chairman of the Board of Executive Directors of BASF SE and Jürgen Nowicki, Executive Vice President Linde plc and CEO of Linde Engineering, at the site in Ludwigshafen. Image: BASF

The demonstration plant is intended to show that continuous olefin production is possible using electricity as a heat source. The partners explain that the plant is designed in such a way that two heating concepts can be tested in parallel – direct heating applies an electric current to the process tubes inside the reactor, and indirect heating uses radiative heat from heating elements placed around the tube.

The partners said that testing these two concepts, processing around four tonnes of hydrocarbon per hour and consuming six megawatts of renewable energy, will make it possible to react flexibly to different customer and site requirements.

By using electricity from renewable sources, instead of natural gas, the new technology has the potential to reduce carbon dioxide emissions by at least 90%, the partners claim. Steam cracking is one of the most energy-intensive production processes in the chemical industry. The furnace of a steam cracker operates at about 850oC – and these temperatures are currently reached by burning fossil fuels.

Chairman of the Board of Executive Directors BASF SE Dr Martin Brudermüller said: ‘BASF’s mission is to achieve climate neutrality, and electrification of the hugely energy-intense steam cracker is a significant milestone in our transformation journey towards net-zero.’

Vice Chairman and CEO of Sabic, Yousef Al-Benyan added: ‘This project holds huge potential for all of the petrochemical industry around the world in our drive for low carbon emitting processes.’