Perkin Medal winner Dr Dennis Liotta has had an extraordinary career including creating AIDS antivirals that have saved thousands of lives. He spoke to us about the twists and turns that brought him from whimsical student to groundbreaking chemist and inventor.

How did it feel to win the Perkin Medal?

It’s one thing to know that you’ve been nominated, but given how prestigious an award it is, I was surprised. To win an award that is basically the highest honor for people who do applied chemistry, that’s pretty special.

How did you get to where you are today?

It started when I was nine years old when my elder brother went to graduate school [to study] chemistry. He was absolutely my first professional role model. He was an outstanding teacher. He could take almost any concept, no matter how complicated, and just explain it in a simple fashion. And so, I had this predilection to go into chemistry and become a professor. He was so good at it, and I hoped I could be close to as good as he was. So, it started there.

Fortunately, when I actually took chemistry in high school, I liked it. And then chemistry in college was certainly interesting. I went to a Catholic elementary school and a Catholic [Boys] High School before going to college. [So, for the] first couple of years, I was more interested in the young ladies than my coursework. I didn’t pay much attention to my coursework and my record in the first few years wasn’t good.

I started to realise that I had dug a big hole for myself. I figured out that the only way I could catch up was to work really hard to relearn all the stuff I missed. I started a process where I would come home every night to try and learn stuff.

I even did something that’s ridiculous-sounding. I had this big, fat organic chemistry book, and I would just open it up randomly to some page and read 10 or 12 pages, and close it back up. Over time, I ended up covering not only the things I missed, but learning about a lot of things that wouldn’t have been covered.

I didn't get into any really good graduate schools because of my first two years, so I stayed in New York City, at the University of New York, and I worked really hard. I was able to get a good postdoc and when I got there, I figured out that there were so many smart people that knew more than I did. The only way I knew to compete was still to work harder than everybody else.

When I got my first academic position here at Emory and was applying for grants, I had to compete against people who had much better pedigrees than I did. Just trying to work hard and maybe a little cleverer than the other folks got me through the early part of my academic career. 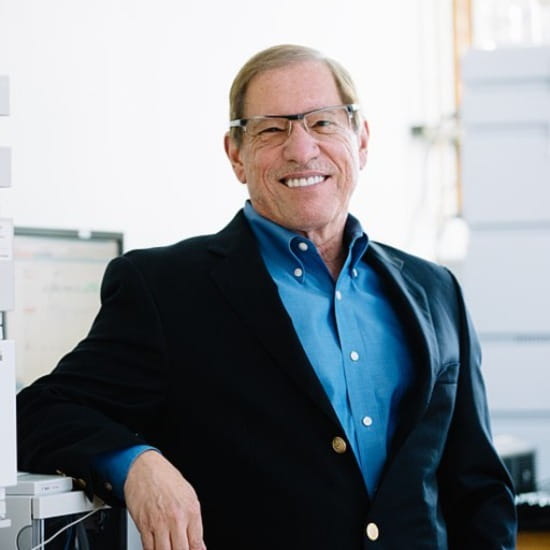 Dennis Liotta in one of his lab spaces at Emory. Image by Marcusrpolo.

How did you start working on antivirals to tackle AIDS?

In the 1980s, when the AIDS crisis was really hitting home, so many creative people were dying. And I just felt like I had to do something. The pharmaceutical companies weren’t making much progress, so I couldn’t do much worse than they did. I felt compelled to do it.

I had a little background in medicinal chemistry, but wasn’t trained as a medicinal chemist, which meant that I had to work really hard to try and learn all that stuff. Fortunately, I had some good colleagues who helped me to get past those obstacles.

I was a pretty good chemist, I was in the right place at the right time, [and] we made some AIDS drugs that are still frontline therapy for treating HIV positive patients today.

Your antivirals for AIDS treatment have saved thousands of lives. How did you come up with them?

It’s an interesting story. I had a student who worked with me as an undergrad for four years, and then he spent the summer in a colleague’s lab, went to Harvard and did an MD and PhD. When he came back, he said you guys should collaborate with Raymond Schinazi (with whom he had worked that summer). He said I was a very good chemist and Raymond was a good virologist and we ought to work together.

Raymond wanted to work with me and I thought it would be a good collaboration. He went to an AIDS Meeting in Montréal and saw a poster about a class of compounds that [researchers had done] some very early preliminary testing on, but they had a very tedious method of synthesising them and not much else. We decided we would try and do something in the area.

And the very first thing we did was we figured out a spectacular way of preparing the compounds – very clean, very efficient. And it meant we could explore all sorts of different permutations around the series of compounds that others couldn’t easily do, because their methods were so bad for making them. So, even though we were competing against some very important pharmaceutical companies that had infinitely more money than we had, we were able to run circles around them because we had a really efficient methodology and that enabled us to make some compounds.

In medicinal chemistry, you make compounds and you test them. You use your intuition to say which compounds you’re going to prioritise, but you never quite know what’s going to work until you actually do it.

It turned out, the very first compound we made and the third compound we made led to FDA-approved drugs. So, some of it was serendipitous. But we like to think of it as being in the right place at the right time or that chance favours the prepared mind.

You’ve come up with more than 100 patents for drugs. Of which other antivirals are you most proud?

A company that I co-founded created a breakthrough hepatitis C drug: sofosbuvir. I wasn’t the inventor of sofosbuvir, but I would say the company – and some of the insights I was able to give the scientists – led to sofosbuvir.

We’ve gotten a number of other compounds in clinical trials – a compound that treats hot flushes in postmenopausal women… Another drug we co-discovered with some folks at Imperial College is looking very well in clinical trials. It’s been given fast-track status by the FDA for treating a number of very aggressive tumours. And we have some really nice anti-cancer therapies – some antivirals that are looking promising.

You went on to found the Emory Institute for Drug Development. Has your job changed?

I would say the most accurate word is to expand my role, because the thing that drives me, always, is the intellectual challenge of the science, but I do get a lot of satisfaction out of being a mentor. I’ve mentored several hundred undergrads, grads, and postdocs. In my lab, I also try to mentor colleagues and, fortunately, some people have mentored me.

Is there any advice you would give young chemists looking to follow in your footsteps.

Work hard and don’t wait until you’re halfway through college! It’s easier if you’re in a job or environment, that’s recognised as a strong area of science. But what I tell people is very simple. I have a lot of students in my class who come in and say, ‘I want to be a doctor’. And I say, that’s a great profession, but do you want to be a doctor because your parents and friends have told you that’s what you’re going to do, or is it a real, permanent choice you are making?