As with many pest, weed, and disease organisms, insect pests present continuing problems in agriculture, and their management with insecticides can give rise to resistant strains which are increasingly difficult to control.

This problem of resistance is becoming critical, especially for the control of vectors of public health concern. This is exacerbated due to the limitations on introduction of new effective and safe insecticidal types and increasing concerns on environmental and human toxicology aspects.

As a consequence, considerable effort has been expended in understanding how insects and related pests become resistant.  This article highlights how new understanding of these processes could influence crop pest management and potentially many other areas.

Traditionally, resistance mechanisms have been explained by changes at the molecular level, such as enzyme inhibition and enhancement, and at the organelle or tissue levels, such as nerves or membranes (Table 1).

The rapid application of molecular biology methods – especially transcriptomics – has revealed changeshat occur when insects are exposed to insecticides or become adapted to survive in such stressful environments.

Any stimulus detrimental to an insect stresses its constituent cells.  The insect response to toxins is no different.  The careful dynamic balance of the cell is perturbed and this balance or homeostasis needs to be recovered if the insect is to survive.  The major components in the cell that maintain proteostasis are the intracellular proteases which interact with the protein synthesis machinery.

Stress in the cell results in oxidised or misfolded proteins which need to be removed. These undesirable proteins are hydrolysed by intracellular proteases, especially the proteasomes, and the resulting peptides and amino acids are recycled to produce the building blocks to make defensive systems (Table 1). Thus, it is likely that the role of proteases is to help prepare the cell to protect it against stressors, rather than provide a de facto resistance mechanism. 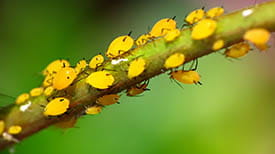 Studies have shown, for some insects, that proteolytic activity was higher in resistant strains compared with the corresponding susceptible strains. Evidence has come from these enzyme assays and also from transcriptomic and proteomic analyses comparing resistant and susceptible strains and insects exposed, or not, to insecticides.  In some molecular biology studies, up-regulation of proteases was associated with resistance or affected by insecticide exposure (Wilkins RM, Pest Manag Sci 2017; 73:2403–2412).

In addition to the normal resistance mechanisms (Table 1), resistant individuals may also have higher proteolytic activity as part of their survival tool chest in an insecticidal situation. Without enhanced proteolysis, their ability to detoxify or tolerate the insecticide may be impaired.  This property can be attributed to resistant pests and could be used to preferentially control them.

Protease inhibitors are well known, and much used in medical treatments, and could find application as insecticide synergists in agriculture and public health. For example, a peptide-aldehyde proteasome inhibitor derived from a Chinese medicinal plant has been patented to enhance control of deltamethrin-resistant diamond-back moth larvae.

An advantage of protease inhibitors, over conventional insecticide synergists, may be their application for any type of resistance mechanism. Alternatively, the protease enzymes may be inhibited, or blocked, using RNA interference (RNAi), a method gaining popularity for future pest management. Proteases are good candidates as targets for RNAi and the appropriate double-stranded RNA could be generated in the host crop plant against aphids and other sap-sucking pests.

Research to date supports the roles that intracellular proteases play in insecticide resistance and the novel applications in managing resistance that may arise.

Richard Wilkins is based at Newcastle University and is a committee member of SCI’s Agrisciences group.