The Engineering and Science for a Sustainable Future (ESSF) Conference 2017

The ESSF conference was a two-day, student-led conference that took place in Nottingham on the 25 and 26 of June 2017. This event was organised by four students, Mariana Grameiro, Tom Clark, Eleonor Bellows and Yazid Lakhad, belonging to three different Centres for Doctoral Training (CDT), all based in Nottingham. Specifically, these students belong to the CDT in Sustainable Chemistry, Additive Manufacturing and Biotechnology/Biological Science respectively. In line with the philosophy of SCI and the three CDTs, the event aimed at bringing together early-stage PhD students and academics with different knowledge and expertise to address the challenge of proving that a sustainable future needs a multidisciplinary network of collaborations.

Fascinating talks from plenary speakers animated scientifically interesting debates during lunch and coffee breaks. Professor Lee Cronin, from the University of Glasgow, introduced his revolutionary ideas about recreating the origin of life in the laboratory as a kit to design artificial biology. Professor Paul Genever, from the University of York, is currently involved in applying genetically modified stem cells to treat age-related diseases that affect the human skeleton. Professor Maria Reis, from the Nova University in Lisbon, developed novel and more sustainable processes to produce biodegradable polymers from waste. These new processes use algae as biocatalysts to transform waste in value-added products and these microorganisms are self-sufficient as they use light, instead of thermal heating, to carry out polymerisation reactions. Finally, professor Victor Sans-Sangorrin, from the University of Nottingham, introduced a few case studies on the use of 3D-printers to create reactors and bioreactors with promising properties that could be potentially applied to large-scale processes.

The event also provided the opportunity for first and second-year PhD students to deliver their oral presentations. A broad variety of scientifically-emerging topics were covered during these two days. Some of these talks were focused on using transaminases to produce chiral amines, ionic liquids as a media for CO2 reduction or catalysts to produce fuels, elemental sulfur as a new feedstock to create tools, supercritical CO2 as a solvent for polymerisation reactions, and insects as food supplements. A poster session was also hosted and students from the University of Nottingham, Liverpool and Bath presented their work on producing biodegradable polymers from waste, adopting engineered bacteria to obtain more benign processes, using earth-abundant metals for catalysis and light to trigger chemical reactions. 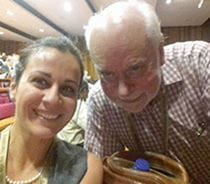 The conference committee did an extraordinary job in organising such a high-standard event and they even secured the presence of Sir Fraser Stoddart, Nobel Laureate in Chemistry 2016, as keynote speaker of the event. Sir Stoddart chaired the last session of the conference and he gave an emotional and fascinating talk about Serendipity and Scientific Careers. The most beautiful message that Sir Stoddart delivered to “this young generation of scientists” was to believe in themselves and their science, keep going and do not give up as science is hard work at the start and it gets more and more rewarding along the way and “it might lead to win Nobel Prizes”. Sir Stoddart was warm and welcoming to all the students, he was kind enough to take pictures and selfies and he also engaged with serious conversation on politics and the future of science with some of the PhD students.

SCI sponsored this event, alongside the Engineering and Physical Science Research Council (EPSRC) and Biotechnology and Biological Sciences Research Council (BBSRC). SCI was represented by Teresa Ambrosio, an SCI Ambassador and PhD candidate at the University of Nottingham Centre for Doctoral Training in Sustainable Chemistry. Most of the students attending the conference did not know about SCI and were therefore pleasantly surprised to hear about the benefits of membership. There was particular interest in the travel bursaries and PhD scholarships that are available to support particularly gifted PhD students.