Despite considerable improvements over the last few decades, cancer caused by workplace exposure to hazardous substances still requires action. An SCI workshop held in May 2010 examined the work done so far and plans for the future.

Cancer arising from workplace exposure to chemicals or other hazardous agents remains a serious public health problem. The European Commission is considering how it could change the legislation on occupational carcinogens to further reduce risk from exposures. As part of this initiative, the Commission asked the Institute of Occupational Medicine (IOM) in Edinburgh to run a number of stakeholder workshops to gather views and opinions, with SCI hosting the third workshop, Workshop on the Control of Occupational Exposure to Carcinogenic Chemicals, on 12 May 2010.

1981 review of workplace carcinogens
In 1981, two eminent epidemiologists, Dr Richard Doll and Dr Richard Peto, published a comprehensive review of the factors known to cause cancer, and concluded that workplace exposures were probably implicated in between 2% and 8% of all cancers. Nearly 30 years later, researchers in Britain have updated their assessment to take account of increased scientific knowledge and changes to industry risk patterns (British Journal of Cancer doi: 10.1038/sj.bjc.6605637). In this study, about 5% of cancer deaths were attributed to workplace exposures (8% in men and 2% in women), with the most important causes of diagnosed cancers being asbestos, shift working at night, mineral oils, solar radiation, silica, diesel exhaust emissions, polycyclic aromatic hydrocarbons, dioxins, environmental tobacco smoke and radon. It is perhaps surprising how few of the materials identified as having an important health impact are used as feedstock in the chemical industry - most are process-generated by-products.

Action still required
It is disappointing that workplace exposures still contribute to such a large number of cancers each year - if the British experience is similar to other states in Europe, then over 95,000 new cancer diagnoses and perhaps 65,000 deaths occur each year because of work. Of course, the causes of these diseases are to some extent historic - for example, asbestos is no longer used in laboratories or construction sites. Some causes, however, are perhaps more prevalent today than in the past, such as diesel exhaust emissions. In addition, exposures to almost all hazardous substances are now lower than they were in the 1980s and earlier. Overall, future risks from workplace carcinogens should also be lower than today. However, this cannot be guaranteed, and renewed action is needed if we are to ensure that occupational cancer is not an important health issue in a further 30 years.

COSHH and the EU Directive
The European Carcinogens Directive (2004/37/EC) is the basis for harmonising minimum health and safety standards in this area; in Great Britain the provisions are enacted through the Control of Substances Hazardous to Health (COSHH) Regulations. Article 5 of the Directive deals with prevention and reduction of exposure, and is probably the key section in terms of achieving future risk reductions. It requires employers to first consider eliminating the carcinogenic substance, or where this is not technically possible to use the carcinogen within a closed system, and where this is not technically possible to apply a range of risk management measures to control exposure. The overarching requirement is that exposure should not exceed the occupational exposure limit (OEL) specified in the Directive (although there are very few limits currently identified in the legislation). 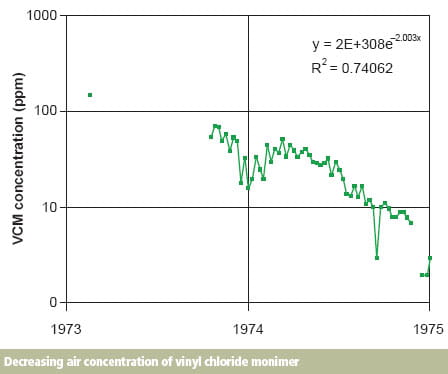 Overview from SCI workshop
The SCI workshop was opened by Dr John Cherrie, who is leading the IOM project for the European Commission. He outlined the background to the workshops and summarised some key information on the effectiveness of controls on workplace carcinogens and how exposures have mostly decreased over the last 30 to 40 years, as, for example, for air concentration of vinyl chloride monomer in five British PVC plants during the 1970s - shown in the figure, right.

The meeting discussed a number of key questions about the suitability of the risk minimisation measures contained in the Directive, whether it was appropriate to mandate employers to seek to eliminate carcinogenic chemicals from their processes, and the role of the OELs in defining the acceptable level of exposure. There was a lively debate, with several suggestions for improving the way the Directive is framed.

Data collection and the future
The next step is for the IOM research team to reflect on the discussions and develop a short questionnaire to collect further information. The questionnaire will be available online, and anyone interested in participating in this survey should contact Marlyn Davis at IOM, E: marlyn.davis@iom-world.org. Dr Cherrie's presentation is available to download from the 'Slides' area of the OH-world website (below).