The second annual Huxley Summit, run by the British Science Association, aimed to explore The will of the people? Science and innovation in a post-truth world. The leadership event invites delegates from political, academic, and corporate backgrounds to debate key scientific themes that present social challenges for the 21st Century.

The first session – titled ‘Learning from the past – what can society learn from GM?’ – delved into the mistakes made by scientists, industry, and government leaders that led to a poorly informed and untrusting public surrounding the topic of Genetically modified (GM) food in the 1990s.

What was the GM debate?

GM is a debate that has become a defining feature of the relationship between the scientific community and the public. Many of the advantages to GM food and crops – from pest and disease resistance to increased shelf-life – were overlooked in favour of the perceived negative effects.

In 2003, a survey – authored by a team of universities, business, and consumer groups – determined that over half of the population did not want GM crops grown in the UK, with only 8% saying they were happy to eat GM foods. It has taken almost 25 years to overcome the controversy, although fears remain. In order to avoid issues of unabated public mistrust again, we need to ask: ‘What went wrong?’

The power of lies

The greatest fault of leaders during the GM debate was the assumption that the dissemination of knowledge was enough to educate the public on the facts of GM. A lack of engagement with the wider population meant media speculation and fear shaped opinions, rather than scientific facts. 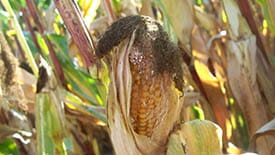 ‘Facts have less power than they ever have,’ said Justin King, Vice-Chair of Terra Firma and former CEO of Sainsbury’s, adding that he believes without change this trend will continue.
In business, King said, it is important that the customer is offered three things: a choice, an opportunity to change their mind, and something that is in it for them. ‘There were none of these in almost all of the early development of GM food,’ he said.

Ottoline Leyser, Professor of Plant Development and Director of the Sainsbury laboratory, University of Cambridge, agreed, saying that people are more inclined to make the right decision when they are given freedom and choice.

King noted that specific innovations, such as ‘a peanut that does not cause anaphylactic shock’, should help to change minds.

Of course, the GM debate is far more complicated. Those involved have to consider how the situation became so divisive, with a clear split between those who supported GM and those who vehemently opposed it.

Leyser said that this is typical of an in-group-out-group mentality, where members who identify as part of the in-group convince themselves that other opinions are not as valid as those within their selected group. ‘GM becomes embedded as a defining characteristic in-group out-group polarisation,’ she said.

Others on the panel echoed these thoughts. ‘Why are certain lies more appealing to the public when there are more lies available?’ said Evan Davies, presenter of BBC2’s Newsnight and author of Post-Truth: Why We Have Reached Peak Bullshit and What We Can Do About It. ‘That’s where the Brexit debate is, and it’s also very true for GM.’

Image (L to R): Robert Madelin, Evan Davies, Ottoline Leyser, Samira Ahmed, Justin King; Credit: SCI
These groups are polarised by a phenomenon called confirmation bias, later described by Tali Sharot, a reader in Cognitive Neuroscience at UCL. Sharot said that an individual develops their beliefs from a very small amount of data, and tends to selectively take in information to confirm their original point of view, rather than facts that oppose it.
'We’re not always aware of how our brains work, but if we become aware of biases we become more contentious and better at communicating advice,’ Sharot said. With common motivations – from better healthcare to helping social mobility – you are more likely to be able to change opinions.
Past or present?
In the end, it is about rebuilding the trust between leaders and the public, and taking some of the blame for the mistakes of the past.
We need to have trust in those communicating science, including the media and teachers – another essential element missed by those in charge during the GM debate, said Davies and King. ‘It is our responsibility to manage the machinery,’ said King – not blame the hands we left it in without instructions.
But Robert Madeline, former senior leader of the European Commission, said these are ‘not lessons from the past’. GM is still widely feared by the public and remains a battle today. The public needs to be involved from the start, not just when a product is ready for the market, he said. While he admits this may seem challenging, public support is essential for forward movement on an issue.
By Georgina Hines
Share