Malaria: prevention is better than cure

A research team has tested more than 500,000 chemical compounds to discover 631 that show promise for treating malaria at an earlier stage.
Rhiannon Garth Jones

There were 219 million cases of malaria in 2017, up two million on the previous year. Increasingly, the disease is drug-resistant and prevention methods are difficult both in non-immune travellers and in areas where the disease is endemic. Moreover, most malaria drugs are designed to reduce symptoms after infection rather than prevent infection or transmission.

A team of scientists are working to change that, aiming to treat the malaria parasite at an earlier stage – when it affects the human liver – rather than waiting until the parasite is in the blood. If successful, their work could have a significant impact on global health.

The team, led by Dr Elizabeth Winzeler, Professor of Pharmacology and Drug Discovery at University of California San Diego School of Medicine, has spent two years using robotic technology to test more than 500,000 chemical compounds and their results were published in Science on 7 December. So far, they have narrowed the list to 631 promising compounds.

Their work is being kept open source to allow the rest of the scientific community to work on their results, boosting the progress towards malaria prevention ‘It's our hope that, since we're not patenting these compounds, many other researchers around the world will take this information and use it in their own labs and countries to drive antimalarial drug development forward,’ Winzeler said. 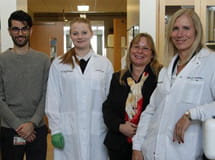 Malaria is usually caused by a mosquito-borne parasite that infects the liver before affecting the red blood cells, causing symptoms and allowing it to be transmitted to others.

Winzeler's team tested up to 20,000 compounds a week, searching for those with the ability to kill the parasites or prevent them from replicating and weeding out any that would be toxic to the liver. Eventually they reduced half a million possible compounds to 631 that showed promise.

The initial testing was done on a related parasite called Plasmodium berghei, which only infects mice, for the safety of the team. The next stage will take those 631 promising compounds and test them on the Plasmodium species that affect humans.

Other developments have emerged in 2018, including work at Imperial College London that goes right to the source: investigating compounds to prevent malaria parasites from being able to infect mosquitoes in the first place. The Imperial team screened more than 70,000 compounds and identified six that might always work.

The drugs would need to be stable enough to be given to a human, as they could not be given directly to mosquitoes. Transferal from human to mosquito would take advantage of the circular process by which malaria is transferred. Their results were published in Nature Communications in September.

Another study, conducted by the University of Liverpool and the Johns Hopkins University School of Medicine, looked at using nanotechnology to deliver atovaquone, an existing antimalarial drug, with an innovative injectable format. It was published in Nature Communications in January.

The intention was to maintain concentration of the drug in the blood for months following a single dose, reducing complications in maintaining preventative protocols. This study is likely to be more relevant initially to non-immune travellers but could also ultimately help people who live in malaria-endemic areas of the world.

All of these approaches are a long way from breaking through but Winzeler is optimistic. She said, ‘We've developed many other options for things like birth control. Why not malaria? The malaria research community has always been particularly collaborative and willing to share data and resources, and that makes me optimistic that we'll soon get there too.’

Winzeler and her team are members of the Bill and Melinda Gates Foundation Malaria Drug Accelerator (MalDA), an international consortium focused on speeding up drug development for global health problems.