RNA interference (RNAi) is a means of reducing or switching-off the expression of individual genes, often described as ‘gene silencing’. RNAi is a natural process with important defence and regulatory functions in animals, plants and fungi.

Unlike DNA – the famous ‘double helix’ – RNA was thought to be present only as a single-stranded form. However, RNA molecules do occur as double-stranded pairs and these activate the RNAi process. Double-stranded RNA (dsRNA) activates biochemical machinery that degrades messenger RNA molecules (mRNA) carrying a genetic code matching that of the dsRNA. When such mRNA molecules are ‘interfered with’ and degraded, the corresponding gene is effectively silenced and no protein encoded in that gene is made.

In the crop protection and seeds industry to date, RNAi technology has been employed in GM crops, as a tool in breeding improved crop varieties and in experiments investigating new pesticide modes of action. 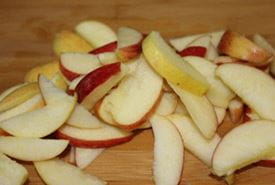 Image: RNAi can prevent browning on slicing in apples.

Producing crop hybrids and varieties with enhanced yield and quality characteristics has been a major application of RNAi technology, largely in the US. Superior traits brought to market have included improved oil composition (high oleic acid); reduced lignin content alfalfa (for greater digestibility of feed by livestock); the elimination of browning on slicing in apples and potatoes; and reduced potential for acrylamide production on frying potatoes.

In Europe, BASF developed Amflora GM potatoes for industrial use only. RNAi had been used to modify starch composition to contain only amylopectin to improve processing. Having been approved for cultivation in Europe, the EU General Court ruled that there had been procedural errors and approval was annulled. BASF had already decided not to pursue Amflora potatoes in Europe or elsewhere due to opposition to the GM technology.

Dow AgroSciences has a long-term collaboration with Monsanto over SmartStax insect and herbicide tolerant maize. SmartStax Pro, which incorporates RNAi technology to counter resistance to Bt (Bacillus thuringiensis) proteins used as insecticides, will be introduced in 2018-20. The main target is western corn rootworm (Diabrotica virgifera virgifera). Coleoptera, such as western corn rootworm and Colorado potato beetle (Leptinotarsa decemlineata), have proved to be very promising targets for control by RNAi and much commercial development of the technology has been focused on these pests. 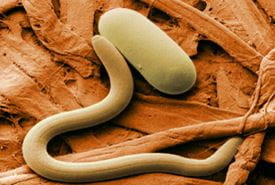 BASF, Monsanto and Syngenta have been using RNAi approaches to control plant parasitic nematodes. Useful effects have included reduction in fecundity, inhibited motility, reduced ability to locate a host, and loss of ability to penetrate and reproduce in the roots of hosts including soybeans and potatoes.

In future, sprayable products applied to the crop or the target may be introduced. In 2016, results on the use of sprayable RNAi technology to control fusarium disease in barley were published by BASF and collaborators. BioDirect is the brand name coined by Monsanto for its sprayable RNAi platform. One of the main aims is to overcome glyphosate resistance in weeds.

Formulations are being researched with the goal of increasing the amount of active ingredient reaching the ultimate target in the cells of plants, insects, pathogens or other pests. Issues may include difficulties in penetration and environmental stability. Strategies for the successful delivery of RNA in human therapeutics are providing inspiration for formulation research in the crop sector. These have included: chemical modification to resist degradation; lipid encapsulation; and conjugation with a polymer. Some specific examples are liposomes; chitin-complexes; dsRNA expressed in bacteria and micro-algae; clay nanoparticles; and organosilicone surfactants.

These projects, often collaborations between the crop protection majors and specialist companies generally working with pharmaceuticals, are much further back in the R&D pipeline, but will be critical to the wider future commercial success of RNAi technology.

By Dr Alan Baylis, SCI Chair of Board of Trustees and Vice-Chair of the Agrisciences Committee