Synthetic biology is just one in a series of multi-disciplinary technologies moving industry into the future. The goal? To engineer organisms to produce chemicals from natural, renewable, and easily accessed products, such as glucose, CO2 or methane. Take glucose for example; as the base product for DNA, researchers can now synthesise a specific DNA sequence calculated on a database, all made from sugars. Advancements like this mean that we now have the scope to build our own biological systems and further clinical research, much like synthesis was able to achieve for chemistry.

Progress in the area is considered particularly lucrative for industry, with the Engineering and Physical Sciences Research Council having invested a near £50 million into research on innovation and technologies in synthetic biology to improve the UK’s competitiveness in R&D. The UK is not the only one wanting to get ahead ­– the US Infectious Disease Research Institute recently announced its intentions to move forward many early-stage candidates to the clinical trial stage, in a bid to eliminate more global infectious diseases, while working closely with biotechnology companies and partners along the way.

Many of the innovative efforts are focused on clinical applications of synthetic biology, and how this new technology can influence the way we diagnose and treat disease. Recent developments have included promising cases of therapeutic microbes.

One of the most high-profile breakthroughs in medicine from synthetic biology research is the creation of a precursor to anti-malarial drugs, artemisinic acid, from yeast. Artemisinic acid can be sourced from Artemisia annua (sweet wormwood) using an extraction process, which before this discovery was in a crisis state due to unrelenting demand and limited supplies of the plant. Now, instead of relying on natural sources, scientists can produce artemisinin-based therapies (ACTs), ranked the most effective anti-malarial treatment, which are cheaper and more reliable. In 2013, French pharmaceutical giant Sanofi opened a new facility to mass produce artemisinin to help supply heavily affected areas. 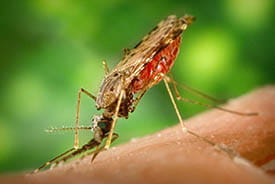 Credit: James Gathany for CDC (left)
Caption: Malaria is most commonly transmitted by the female Anopheles mosquito bite, which transfers parasites from the mosquito’s saliva to an individual’s blood

Scientists in the US were able to modify the metabolic pathways of Saccharomyces cerevisiae, a species of yeast that is used in winemaking and baking, so the organism could convert sugars to artemisinic acid, which can then be used to make artemisinin. The process is referred to as ‘semi-synthetic’ since the acid production phase of the process is still natural. The research, which was partly funded by the Bill & Melissa Gates Foundation, means that artemisinin can now be produced on a much larger scale, creating a low-cost drug that could help eliminate malaria in the developing world. 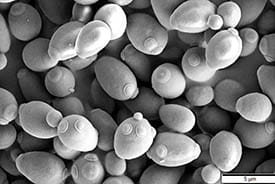 Credit: Mogana Das Murtey and Patchamuthu Ramasamy (right)
Caption: A strain of yeast (S cerevisiae) has been genetically engineered to trigger an immune response against cancer cells in mice

A more recent development in the field comes from South Korea, where researchers at Chonnam National University were able to engineer Salmonella, a common strain of bacteria found in food poisoning, to trigger the immune system to attack cancer cells. Previous studies have confirmed that bacteria have a natural adherence to cancer cells and tumours, and therefore make excellent vessels for medicine to target sites. The team behind the discovery modified the bacteria to become 10,000 times less toxic, to avoid other associated health problems, and manipulated the strain’s DNA so it could produce and secrete flagellin (FlaB). FlaB is the protein needed for a microorganism to build a flagellum; a ‘tail’ used by a cell to move around in its environment.

However, FlaB is not naturally produced in vertebrate animals, so it is detected as a foreign body by the immune system. Once the genetically modified Salmonella cells enter the cancerous tumour, the immune system is triggered by a signal to attack the malignant cells that make up the tumour. Preliminary tests on mice showed that 60% of treated tumours were completely destroyed, prolonging the life of the mouse. The scientists involved believe that the technique could be most effective when used alongside traditional cancer treatments, such as chemotherapy and radiation. Success of trials like this shows promise in the field, providing hope for upcoming clinical trials with patients.

Industry is welcoming of the field’s growing developments and technologies. Costs are beginning to fall, with glucose as an example, so business use of these techniques is now imminent. The application of biotechnology in industry has many advantages, namely the way it has reinvented the manufacturing process of products, which now means that new clinical methods can be ready for market two to five years after the original lab research, compared with the decade-long process of drug discovery. The medical biotechnology sector is currently worth US$150 billion annually, with even more growth in the industry expected.

However, of late there has been trouble balancing research with commercialisation, due to the projected meteoric rise of synthetic biology research and a longer timescale for industry development of each product. We have seen this in difficulties with the mass production of ACTs from yeast, as naturally made artemisinin remains cheaper than the ‘semi-synthetic’ alternative, despite predictions. As a result, industry officials are asking researchers to prove to them what the unmet needs of the market are, and how existing research and industry limitations can be combined with ambitious research prospects.

Innovation in synthetic biology is just one on the topics being discussed at SCI’s upcoming ‘New Synthetic Methods ­– Design and Application’ event. Speakers from both academia and industry will be highlighting the latest advancements in synthetic research, from new catalytic methods to photochemical reactions.

The event will be held on Thursday 28 September 2017 at SCI’s London offices (15 Belgrave Square, London SW1X 8PS) and is organised by our Fine Chemicals Group. More details can be foun here.