Using hydrogen as a low carbon and clean energy source in transport, buildings, and industry, has grown in popularity.
Georgina Hines

The concept of a hydrogen economy is not new to anyone involved or familiar with the energy sector. Until the 1970s, hydrogen was a well-established source of energy in the UK, making up 50% of gas used. For several reasons, the sector moved on, and a recent renewed interest into the advantages of hydrogen has put the gas at the forefront in the search for green energy.

Confidence behind the viability of hydrogen was confirmed last October when the government announced a £20m Hydrogen Supply programme that aims to lower the price of low carbon hydrogen to encourage its use in industry, power, buildings, and transport.

‘In a way, hydrogen is more relevant than ever, because in the past hydrogen was linked with transportation,’ UCL fuel cell researcher Professor Dan Brett explained to The Engineer. ‘But now with the huge uptake of renewables and the need for grid-scale energy storage to stabilise the energy system, hydrogen can have a real role to play, and what’s interesting about that […] is that there’s a number of things you can do with it.

‘You can turn it back into electricity, you can put it into vehicles or you can do a power-to-gas arrangement where you pump it into the gas grid.’

One of the most promising uses for hydrogen is in fuel cells for use in electric vehicles. When hydrogen and oxygen react, they release energy that can be converted into electricity. This principle is used to power fuel cells which essentially act like batteries.

While there are many benefits to fuel fells – improved sustainability, compact size, and efficiency –  innovation in the area is still needed to help the government achieve its target of removing all petrol and diesel cars from UK roads by 2040.

Johnson Matthey, for example, has developed best-in-class lithium iron phosphate (LFP) cathode materials for light and heavy-duty vehicles. Lithium is the smallest and lightest metallic element and therefore is a strong reducing agent – an essential characteristic for fuel cells.

There are a number of ways to produce hydrogen: natural gas reforming, electrolysis, renewable liquid reforming, and fermentation. Despite widespread use in industry, problems persist with the efficiency of these methods. The main challenge for hydrogen production is cost. To act as a viable alternative to cheap fossil fuels, hydrogen must be cost-competitive – a priority of the Hydrogen Supply programme. 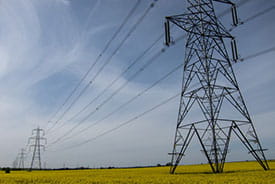 However, its production can be powered by renewable energy sources – another benefit for a low-carbon economy. In fact, National Grid announced this summer that more electricity is being generated than needed, and a team from the Institution of Mechanical Engineers believe the UK should capitalise on excess solar and wind power to help power hydrogen production.

‘We are seeing continued expansion of renewables. If we’ve got a lot of low-carbon power, we want to make sure we’re using all of that,’ said lead author Dr Jennifer Baxter.

However, all of the hydrogen produced cannot be stored in fuel cells and batteries, as they are not built to hold large amounts of electricity over time. Efficient hydrogen storage is therefore critical to the success of hydrogen use in a low carbon economy. As a result, industry giants – from Shell to BMW – are investing in hydrogen storage research to aid the transition to large-scale hydrogen use.

But infrastructure is lacking in the UK, although there is fast progress within the EU – Germany in particular – and policies encouraging hydrogen’s use are being heavily debated.

So, is hydrogen the fuel of the future? With innovation at the steering wheel it has the flexibility and the potential to be the next big energy trend – policy just needs to catch up.