The London group's visit to the Old Operating Theatre Museum in Southwark on 22 May 2013 drew 18 SCI members and guests. The event included a fascinating tour of the museum, a talk by herbalist Karen Howell, and a drinks reception.

The museum is based in St Thomas's Church and was originally built by Sir Christopher Wren's master mason Thomas Cartwright. The museum displays the history of herbal medicine, surgery and nursing at Old St Thomas's Hospital, and Guy's Hospital plus the Evelina Children's Hospital built by Ferdinand Rothschild (1801). These provide a dramatic insight into life before the modern era.

The roof garret of the 18th century church of St Thomas the Apostle, near London Bridge, contains Britain's oldest operating theatre, which dates from 1822 and was part of St Thomas's Hospital before it closed and moved to Lambeth.

The oak-beamed garret was used by the apothecary for the storage and curing of herbs to be employed in medicines. The theatre witnessed the advent of anaesthesia in 1846 and was closed three years before Lister began his experiments in antiseptic surgery. Florence Nightingale founded her School of Nursing at the Old Operating Theatre in 1860 and advised on the hospital's subsequent move.

After its closure in 1862 the operating theatre was almost forgotten. Almost a century later, in 1956, Dr Raymond Russell was researching the history of St Thomas's Hospital and began a search for the old theatre. 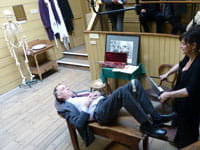 After drawing a blank in the basement, he decided to investigate the opening into the attic, and climbed into the garret. This was completely dark because the glass in the theatre's skylight had been replaced by slates and the dormer windows in the rest of the roof-space were black with a century of dirt. The garret was restored by a group of enthusiastic volunteers, and with a grant from the Wolfson Foundation, the museum opened in 1962.

This historic building is not only unique, but remarkable due to its dramatic setting. The site, together with the museum collection of medical instruments and herbal medicines, is an evocative reminder of the major advances in medical treatment over the past 150 years. This was brought sharply into focus when our guide 'demonstrated' the operating theatre in use, with the London group chairman, Dr Fred Parrett, gamely standing in as the patient (pictured).

Our thanks to Dr Parrett for organising this highly successful event.