The SET for Britain Awards were established in 1997 by Dr Eric Wharton DSc to encourage early career researchers to interact with their MPs and Parliament and to give them a platform to showcase their research work in Parliament in the form of a poster competition. SET stands for Science, Engineering and Technology.

The most recent SET for Britain Awards took place at the House of Commons on 9 March 2015, and was sponsored by Andrew Miller MP, Chairman of the SET for Britain organising group of the Parliamentary and Scientific Committee.

The topics of the posters were wide-ranging and were split into three distinct categories; Biological and Biomedical Sciences, Physical Sciences (Chemistry and Physics) and Engineering and Mathematical Sciences.

Each category had a select panel of judges, who were tasked in choosing the Gold, Silver and Bronze Awards for their categories.

Once the Gold for each category was known; a super panel was assembled to quiz the presenters on their entries. An overall winner was then chosen to receive the Westminster Medal, given in honour of Dr Wharton.

This year, the Westminster Medal was awarded to Physics Gold winner, Robert Woodward (above right) from Imperial College London, for his poster entitled 'Exploiting Nanomaterials for Ultrafast Photonics'. Julian Perfect, SCI London Group Secretary, presented the medal (pictured second from right below). This is the second time in two years that a poster on the subject of nanomaterials has won the Westminster Medal – in 2013, Valeska Ting won the award for her poster, entitled 'Pushing hydrogen to the limit: engineering nanomaterial systems for storage of solid-like hydrogen'. 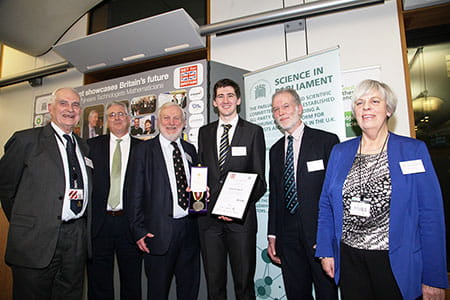 The London Regional Group supports SET for Britain by providing funding for the Westminster Medal in honour of Dr Wharton, who served as the Group's Chairman and was an active committee member until his death in 2007.

For more information about the other SET for Britain award winners, please see below: