Since their first development almost a century ago, antimicrobial drugs have played a massive role in improving human and animal health. However, antimicrobial resistance (AMR) has been documented since the earliest days of drug use. The scale of this problem has exploded in recent years, with AMR now being widely reported throughout the globe. Scientists fear we may now be close to tipping point where many of our front line drug therapies will be rendered useless by AMR, triggering a public health and economic disaster.

AMR has now been documented in almost all parts of the world spanning from clinical isolates from patients in developed countries including the UK1, developing countries2, and even in wildlife such as African elephants3. The full impact of this spread remains unclear but is likely to be severe4. For humans, for example, it has been estimated that current levels of AMR are likely to cause at least 23,000 deaths per year in the USA5. Notifiable diseases are expected to resurge with growing levels of AMR6,7. The total cost of AMR to healthcare systems within OECD countries has been estimated to reach £1.9 trillion by 2050.

The impact of AMR in the UK is sizeable. Limiting the spread of AMR is complex and requires a number of approaches including the use of vaccines and stringent hygiene practices. The National Institute for Health and Care Excellence (NICE) says that the profligate use of drugs has allowed bacteria to develop resistance8. Tighter international agreement will be needed on how antibiotics are regulated and prescribed. 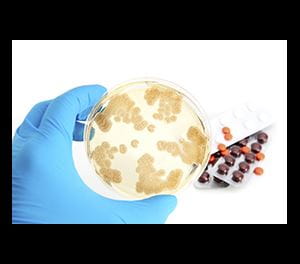 Antibiotics are most widely used for non-medical purposes such as livestock production, in cleaning products, aquaculture and food preservation. This has led some scientists to recommend a global ban on use of antibiotics as animal growth promoters9. However, the extent to which tackling AMR in livestock will benefit human health remains unclear. Recent data from Scotland indicates that resistant Salmonella strains may have arisen independently in people and livestock, and are not always exchanged between these groups10. This complexity makes it difficult to know which strategies will be most effective at mitigating the problem.

Chief Medical Advisor to the UK Government Professor Dame Sally Davies says: ‘If we do not take action, then we may all be back in an almost 19th Century environment where infections kill us as a result of routine operations. We will not be able to undertake a lot of our cancer treatments, caesarean sections or organ transplants because of the risk of infection.’

Clearly, AMR is an issue that requires a response from biomedical innovators, as well as one from agricultural specialists, clinicians, public health researchers, social scientists, the public and governments worldwide.

We are honoured that Professor Dame Sally Davies will be delivering the SCI Lister Memorial Lecture on the subject of antimicrobial resistance on the 8 June 2016 at the Royal Society of Edinburgh (RSE) at 5pm. Prior to this, in the afternoon, SCI with assistance from the RSE Young Academy of Scotland (YAS) is planning an interactive afternoon of talks, workshops and exhibitions for children and adults to learn more about this topic.

For more information on the Lister Memorial Lecture 2016, and details of how to book, please click on the link below.