Science and the Parliament visit

This item first appeared in 2008

5 October 2008 at Our Dynamic Earth, Edinburgh

Once again members of the Scotland Group committee were flying the SCI flag at the Science and the Parliament event held on Wednesday 5 October 2008 at Our Dynamic Earth, Edinburgh. The topic for this, the eighth in the series, was ‘Educating Our Scientists of Tomorrow’. Popularity for this event continues to grow amongst MSPs and the Scottish scientific community with this year having the highest attendance so far. A welcome by Royal Society of Chemistry President Prof Dave Garner was followed by speeches from Fiona Hyslop MSP, Cabinet Secretary for Education and Lifelong Learning, and Prof Stuart Munro, Co-chair of the Scottish Science Advisory Committee. Much of their presentations focused on ‘Curriculum for Excellence’. Initiated in 2002 as a consultation exercise aimed at improving the current curriculum in Scottish Schools and producing children who are:

Changes are aimed at liberating teachers, engaging pupils by making learning fun and decluttering the present curriculum. The first exams are planned for 2014. Ms Hyslop also described the new Science Baccalaureate which aims to encourage school pupils to study sciences in their later years at school and will include an interdisciplinary project, this will be awarded from 2010. More information on both these initiatives are on the Scottish Government website.

The speeches were followed by Scientific Q&A then Breakout Sessions, under the following topics: 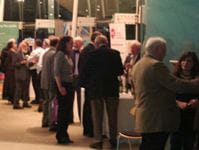 Each group was given the task of discussing a topic and choosing one question to be debated by MSPs, Ken MacIntosh (Lab), Murdo Fraser (Con), Robin Harper (Green) Christopher Harvie (SNP) and Liam McArthur (Lib Dem). Then a representative from each session was to present the five points which the group felt were most important, the mathematical abilities of some of the presenters was questionable. The day finished with a reception and exhibition, getting to interact with scientists from other disciplines is an important and enjoyable end to the event.

Thanks to Bristow Muldoon (RSC and Royal Society of Edinburgh Parliamentary Liaison Officer) who organised the event for the first time aided by Julie Smart and also the staff at Our Dynamic Earth.