Each year SCI’s Scotland group a runs competition where students are invited to write a short article describing how their PhD research relates to SCI’s strapline: where science meets business.

Chris Thomson (right), a PhD student at Heriot-Watt University, is one of this year’s four winners. His article ‘Glowing with the Flow: Heterogeneous Photocatalysis in Flow Chemical Reactors’ is reproduced here:

Glowing with the Flow: Heterogeneous Photocatalysis in Flow Chemical Reactors

Photocatalysis was one of the first synthetic chemical processes on earth, used in the biochemistry of early photoautotrophic organisms, which led to the diverse biosphere we know today. In 1912, Giacomo Ciamician, who is often hailed as the ‘Grandfather of Photochemistry’, published an article entitled, ‘THE PHOTOCHEMISTRY OF THE FUTURE’

The article was ahead of its time and ends with the profound statement: ‘I believe that industry will do well in using from this very day all the energies that nature puts at its disposal. So far, human civilisation has made use almost exclusively of fossil solar energy. Would it not be advantageous to make better use of radiant energy?’

A single photon of blue light delivers the same amount of energy to a molecule as would be required thermally, by heating to 5726.85 oC (6000 Kelvin). This might make you question why everything is not permanently on fire, but thankfully only certain molecules can absorb photonic energy, so this tremendous amount of energy can be delivered to a specific chromophore within a reaction mixture without degrading other molecules. 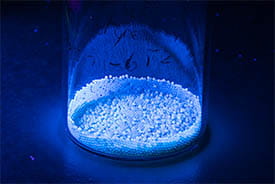 My MChem project was with the VilelaLAB at Heriot-Watt University and involved synthesising photocatalysts and testing for activity in a reaction that is used to bond heteroarenes and alkyl groups under mild conditions. This is a common feature of many drug molecules, such as Bendamustine which is used to treat cancer. I synthesised a library of photocatalysts that had not previously been used for this application and were all free of metal species that are traditionally used, which eliminates risk of toxic metals reaching the patient. I then immobilised the photocatalysts by attaching them to a polymer support to see if the activity remained, which it did.

The immobilised catalysts showed a decrease in activity from their homogeneous equivalent (as expected) but interestingly showed an improvement on other polymer materials containing the same catalytic core as part of their polymeric backbone – my group has previously published on this for different applications. It is likely that the environment of the catalyst and how it was attached to the polymer resins has produced a more reactive species.

Using immobilised catalysts simplifies the arduous purification processes commonly used in industry as the catalyst is simply filtered, washed and recycled. We use flow chemistry to enhance our reactions and rather than having a large flask with all reagents mixed together, reagents are pumped through tubing. This offers an unparalleled control of reaction conditions and, as the tubing is only 1mm in diameter, light can more evenly irradiate the solution flowing through the tubes. Our supported photocatalysts are fixed in position and have the solution pumped through the matrix. This facilitates mixing the reagents and the active sites of the photocatalyst.

Flow chemistry also overcomes a safety issue with high intensity light sources and volatile solvents, as the amount of solvent exposed to the light source is minimised, and the efficient mixing and dispersion prevents the creation of ‘hot-spots’ that can occur in batch reactions and lead to a reaction going out of control. The material, once optimised, could significantly reduce the cost of manufacturing certain drug molecules that would in turn reduce the cost of treatment. The future is certainly bright, thanks to photocatalysis.

Good, but not good enough?

How is chemistry enabling energy storage for net zero?