Although many have heard of Arthur Vogel and been familiar with his researches, relatively few people actually knew him at the time. 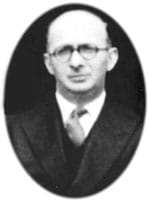 He was a very private man in many ways, who successfully compartmentalised his family life and working life, but preferred to shun the limelight. Very few photographs of him survive. He was born in London and attended the Davenant Foundation Grammar School, then located at Whitechapel. Then he studied chemistry at Queen Mary College receiving a BSc with distinction and stayed on to work with Prof J R Partington at Queen Mary Colloge London to gain an MSc for a dissertation on synthesising S2O3 in 1925. After a short while at UCL, he then joined the Research School of Prof J F Thorpe on organic and physical chemistry at Imperial College London, where his output of papers was tremendous. He received the degree of DSc (London) for his researches on surface tension, electrochemistry, organic synthesis (largely on cyclic compounds) and sulphur chemistry.

After a brief sojourn in industry, in January 1930 Vogel became a Lecturer in Chemistry at the then Southampton University College. In January 1932 he was appointed Lecturer-in-Charge at Woolwich Polytechnic, which evolved to Head of the Chemistry Department at the young age of 27. Woolwich Polytechnic by then had become an Institution with Recognised Teachers of the University of London. The degrees were internal to the University of London. At Woolwich he bridged the gap between inorganic, organic and physical chemistry and encouraged his students to reach their full potential. A key feature of his research was preparing pure compounds with his staff, students and technicians to prepare more that 1000 (mostly organic) compounds. Vogel encouraged his students to join the then Chemical Society and the Royal Institute of Chemistry (both precursors of the Royal Society of Chemistry). He was a member of the Council of the Chemical Society for many years until his untimely death in 1966.

Publications
He is best known for his textbooks. Well known titles are:

These books have been used in laboratories worldwide, often being translated into other languages such as Spanish, Portuguese, Polish, Russian and Chinese.

The initial writing and the constant revision of these books represented a prodigious effort by one author, whilst all new material incorporated into the books was carefully checked in the laboratory. Over the years the Department developed steadily and became the home of a vigorous Research School.

Students
The welfare of his students was always of major concern to Vogel, and whilst exhorting the able to greater efforts, he took particular care to encourage weaker students. Nothing gave him greater pleasure than to witness the careers of laboratory technicians who subsequently achieved the status of qualified chemists.

To his colleagues, the wide breadth of his interests the probing mind and also his insistence upon high academic standards were a constant challenge. He was certainly intolerant of incompetence and had no hesitation in condemning it. At the same time Vogel could be a very kind man who would quietly help out in various ways to students or staff in difficulties.

Vogel's legacy
Although a quiet man, Vogel was an extensive networker and facilitator, and periodically encouraged his research students in particular to visit other colleges of the University of London. These visits were for using equipment that the Polytechnic did not have and for informal seminars on research topics. Such visits were arranged on a friendly basis at the time, where money did not change hands! Vogel also encouraged students to make use of the extensive resources then available at the University of London Library.

Vogel also developed a Woolwich Polytechnic Chemical Society in from the 1940s onwards. Invited lectures on Monday afternoons, when leading chemists like Linus Pauling, Geoff Wilkinson, Alexander Todd and numerous other Nobel laureates plus other chemists of high international reputations would readily agree to give such talks when requested by Vogel.

Indeed, Vogel applied himself to all tasks with unflagging energy and through his wisdom and foresight the Chemistry Department at Woolwich Polytechnic (a forerunner of what was to become Thames Polytechnic and the University of Greenwich) became the home of a vigorous Research School, and a great chemistry tradition continues on the new campus. His output of research publications was remarkable, not only for their quantity, but also for their breadth of interest.

His rich legacy has survived, and many of his textbooks continue to be revised and updated with the support of his colleagues at the polytechnic.

At the conclusion of the lecture, the current head of Greenwich School of Science, Professor Snowden, assured the audience that they would seek to have a plaque placed at the new Medway campus labs. It will be similar to that in the old polytechnic labs in Woolwich, and will commemorate the contribution of Vogel to chemistry and the support and work he did for the polytechnic.

Vision and Strategy
Governance and Structure
Key People
Get Involved