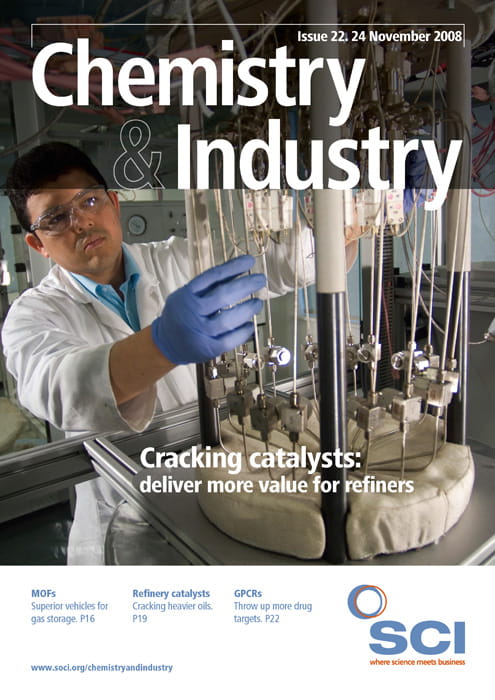 A major milestone in the development of any young scientific discipline is its first international conference and this has just occurred for metalorganic frameworks (MOFs). Taking place in Augsburg, Germany, at the beginning of October, MOF08 brought together over 300 scientists from around the world to discuss this burgeoning discipline, which is already causing them to reach for the superlatives.

‘The domain is currently exploding and there are so many potential applications that it is difficult to decide how to prioritise them,’ says Gérard Férey, a professor of chemistry at the University of Versailles’s Lavoisier Institute near Paris and chairman of the organising committee for MOF08. ‘The only limit is our imagination.’

‘This is the fastest growing area in chemistry and one of the most cited,’ says Omar Yaghi, a professor of chemistry at the University of California, Los Angeles, and a member of the team that synthesised the first MOF back in 1999.

The excitement is caused both by the ease with which enormous populations of MOFs can be synthesised and their wide range of potential applications, from gas storage to catalysis to drug delivery and more.

MOFs are three-dimensional, crystalline substances in which metal-based molecules (usually metal oxides), acting as ‘joints’, are linked together by long, rigid organic group ‘struts’. This produces a regular structure that resembles scaffolding, with huge pores that provide MOFs with an enormous surface area. Despite their highly ordered structure, however, they can be produced by simply mixing together solutions of metal oxide molecules and organic groups.

The secret is to set up the reaction conditions so that the two types of molecules can only join in one set way. As such, the precise shape of the subsequent MOF depends solely on the way that the molecular struts and joints fix together, and this is determined by the nature of the metal oxides and organic groups. Different metal oxides can bond with varying numbers of organic groups at various different angles, while the organic groups can have an almost infinite variety of lengths and compositions.

‘If you take metal oxide joints and link them by fairly rigid organic groups that only link through their ends, then you can see how you would build up a framework-type structure fairly easily,’ explains Russell Morris, a chemistry professor at the University of St. Andrews, Scotland.

Yaghi and his colleagues came up with this technique while investigating ways to connect molecular building blocks together using strong bonds and built their first MOF by mixing zinc oxide molecules with terephthalic acid groups. Since then, Yaghi has gone on to synthesise many other MOFs – of varying sizes and shapes and possessing a variety of properties. Other research groups have been quick to follow suit and today over 2000 MOFs have been synthesised.

‘You have a library of organic links that could be employed and you have hundreds of metal oxide units that could be used,’ says Yaghi. ‘There is an almost infinite number of possible structures.’

Fortunately, there also appears to be an almost infinite number of possible applications. The two most obvious come from the fact that MOFs have a similar structure to zeolites, aluminosilicate compounds that also possess large pores. As molecules are able to enter these pores, where they can either be stored or take part in chemical reactions, zeolites can be used for both catalysis and gas storage.

MOFs should have similar gas storage and catalytic abilities. Not only because they are extremely porous, with large empty pores for housing molecules, but also because MOFs contain exposed metal atoms, which should be able to bind to gas molecules and catalyse chemical reactions.

Yaghi has spent much of the past 10 years proving that MOFs are indeed very effective at absorbing and storing a wide range of different gas molecules. These include gases useful for generating energy, such as hydrogen, and polluting gases like carbon dioxide.

Most recently, in 2008, he reported that a number of his MOFs, including one in which zinc carboxylate molecules are joined together by 2-aminoterephthalate groups, were highly effective at absorbing polluting gases such as ammonia and sulfur dioxide. Indeed, some of them proved more effective absorbers than activated carbon, which is the basis for most current commercial systems for filtering polluting gases.

So far, the catalytic abilities of MOFs have received less attention, perhaps because these only tend to become apparent at low temperatures. Nevertheless, a team at the Korea Research Institute of Chemical Technology, Daejeon, has reportedly shown that certain MOFs are able to catalyse the alkylation of benzene as part of the Friedel-Crafts reaction, which is widely used by industry.

But the potential of MOFs goes far beyond simply mimicking zeolites. For example, Russell Morris is also exploring the gas-absorbing abilities of MOFs, but specifically for medical applications.

In particular, he is investigating the abilities of certain MOFs, most recently MOFs based on copper or nickel oxides linked by 2,5-dihydroxyterephthalic acid, to absorb and later release nitric oxide (NO). This simple molecule has been found to perform a range of signalling roles in the human body, including prompting smooth muscle cells to relax, allowing widely-separated neurons in the brain to communicate with each other and defending the body against attack by bacteria and parasites.

Morris’s idea is to use NO-absorbing MOFs to help prevent the blood clotting that can be caused by artificial medical devices, such as catheters and stents. The MOF would release its load of NO in the area around the device, causing the blood vessels to relax and preventing the formation of the platelets that lead to clotting.

He originally began investigating zeolites for this purpose but has subsequently moved over to MOFs, which have proved more effective. ‘With their very high porosities and very high numbers of metal sites in the frameworks, MOFs make excellent storage and delivery materials for these types of medical gases,’ he says.

Other groups are investigating using MOFs to store and deliver actual drug molecules. For example, chemists at the Universidad Complutense Madrid, Spain, have shown that MOFs can take up the anti-inflammatory drug ibuprofen and then release it over a number of days.

Chemists at the University of North Carolina, US, led by Wenbin Lin, have taken a slightly different approach and incorporated the anticancer drug cisplatin into the structure of a MOF, using it to form part of the organic struts linking together terbium ions. By stabilising these MOFs with a silica shell, the chemists found that they could deliver the cisplatin to cancer cells.

Indeed, at the moment, novel uses for MOFs are seemingly being discovered all the time. Last month alone, Lin and his team announced that they had developed MOFs consisting of manganese ions linked by struts made of either terephthalic acid or trimesic acid. These MOFs were able to deliver the magnetic manganese ions to cancer cells, allowing them to be viewed by magnetic resonance imaging.

Meanwhile, US scientists at Sandia National Laboratories and the Georgia Institute of Technology showed that MOFs could be used for chemical sensing. In particular, they found that MOFs comprising copper ions linked by benzenetricarboxylate struts could act as molecular receptors on microcantilevers.

This is because MOFs expand slightly when they absorb molecules. If the MOFs are attached to a microcantilever, then this expansion causes the microcantilever to bend and this bending can be detected. In this way, the scientists were able to detect gas-phase molecules of water, methanol and ethanol.

In parallel with this almost endless exploration of applications, scientists are also trying to learn more about MOFs and their properties. Fortunately, the fact that MOFs are crystalline means that their structures can be determined by X-ray crystallography.

This has not only helped scientists to work out what specific combinations of metal oxide molecules and organic groups produce what structures under what reaction conditions, but has also allowed them to elucidate the underlying principles of MOF synthesis. ‘Our thesis is that it is the most symmetrical MOF structures that result from the synthesis and so far this thesis has worked,’ says Yaghi. ‘So that out of the infinite number of possible structures [that could be produced] you only need to identify the most symmetrical ones, which are the most likely to result from the synthesis.’

Other researchers are now investigating other aspects of MOFs. For example, a team at the US Department of Energy’s Argonne National Laboratory near Chicago is exploring how MOFs respond to pressure. Given their porous structure, the researchers expected the MOFs to be fairly soft, like a sort of molecular sponge, and to collapse under pressure.

‘If you take your kitchen sponge and squeeze it, the volume collapses by a large amount,’ explains team member Karena Chapman. Together with her colleagues, she found that exactly the same happens with MOFs. ‘The kinds of things we see are structural transitions where the pores close up, changes to the symmetry of the structure and possibly changes to the bonding within the framework itself,’ she says.

This work has implications for the kind of molecules that can be absorbed by MOFs under pressure and what might happen to MOFs during any kind of processing. For although MOFs are usually produced as powders, they will probably need to be processed into larger forms for commercial applications.

This kind of processing is now starting to happen. BASF already manufactures a small range of MOFs at the multi-100kg scale, including the zinc oxide-terephthalic acid MOFs originally synthesised by Yaghi, which it then processes into cubes. Some of these MOF cubes are sold by Sigma-Aldrich for gas storage applications, but the majority are used by BASF scientists in the company’s R&D projects.

For even though MOFs have already shown a great deal of promise and generated lots of interest, researchers in this area are certain that current discoveries only represent the tip of the iceberg. To this end, Yaghi is now looking to synthesise MOFs with much more complex designs in order to give them a whole range of new abilities, like electrical conductivity.

He has also used the lessons learned with MOFs to produce compounds with similar ordered structures but made up of different types of chemical groups. These include covalent organic frameworks and zeolite imidazolate frameworks, both of which have demonstrated impressive gas storage abilities.

Morris, meanwhile, is creating chiral MOFs for separating chiral compounds. Interestingly, he doesn’t produce these by incorporating chiral groups into the MOF structure, but by using achiral molecules that naturally link together to form lefthanded or right-handed structures.

Given all this activity, scientists will be jetting off to international MOF conferences for many years to come.