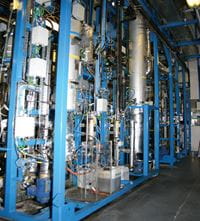 Since ICI first manufactured Perspex and its monomer, methyl methacrylate (MMA) in the early 1930s its uses have broadened from glazing applications, including cockpits for Spitfires and Hurricanes, to high technology uses including flat screen TVs, transparent ABS (MMA-acrylonitrilebutadiene- styrene polymer), exterior and interior decorative paints, as well as the 'tombstones' or 'lucites' presented to bank dealmakers on the completion of a financial deal.

Global annual production of polymerised MMA (PMMA) before the recession was about 3m t/year, which places it as a medium scale product similar to polycarbonate, but substantially smaller scale than polyalkenes and polystyrene. Lucite is the world's largest MMA manufacturer with 850,000t/ year capacity and a 30% share of merchant MMA sales globally.

In Lucite's new Alpha process, ethylene is reacted with methanol and carbon monoxide in a first step at 100% selectivity to methyl propionate. In the second step this is reacted with formaldehyde to form MMA and water. Selectivities on ethylene are close to expectations from the pilot plant; minor differences are being investigated.

The first plant, with 120.000t/year capacity, started up in Singapore in November 2008 and has been running at capacity since February. The technology has a significant economic advantage over the older technologies and single stream plants can be built at scales of at least 250,000t/ year, enabling scale dependent capital and fixed cost advantages to be added to the at least 20% variable cost advantage. We also expect substantial environmental advantages in a lower energy footprint and avoidance of toxic and corrosive process components.

The original ICI 'ACH' process, which is still the predominant process in Europe and the US, involves reacting hydrogen cyanide with acetone to form acetone cyanohydrin, which is then isomerised in the presence of 100% sulphuric acid to methacrylamide sulfate. This is reacted with methanol to yield MMA and ammonium hydrogen sulfate, which can be either converted to ammonium sulfate fertiliser or incinerated to sulfur dioxide and hence back to sulfuric acid.

The C4 Process, the most common process in Asia, appears much simpler than the ACH process, but it has a very low selectivity – ca 70% of isobutene ends up as MMA – and is limited by the scale of the oxidation reactors to 80,000t/year.

Alpha developed from a need identified by the ICI board to develop new PMMA plants that allow the polymer to better compete against other inferior plastics, such as polystyrene and polyacrylates. Starting from a clean sheet in 1990, a small team of chemists and engineers identified several different processes, which, on paper at least, looked possible replacements for existing technology. These were investigated experimentally through catalyst development, conceptual process design and by using predictive models to evaluate the long term economic attractiveness of feedstocks such as ethylene, propylene, methanol, acetone and isobutylene.

Not all of the predictions have survived the test of time; isobutene was expected to be priced out of MMA use by MTBE demand into gasoline; this blossomed in the mid 1990s, but had faded within 10 years; oil prices were predicted to stay in the sub-$30/barrel range. One correct prediction was that propylene would rise in price to match the ethylene price and that this would put acetone based routes at a relative disadvantage. Fortunately for us, the ethylene based technology stayed the most attractive option throughout the development stages and remains so after the plant start up; indeed the cash cost of production in Q4 2008 was 60% of our best ACH plant.

Crucially, to optimise plant performances, we had to invent new catalysts and new separation steps. The catalyst for the first reaction stage, which operates at only 100oC and 10bar total pressure, is a palladium bisphosphine that displays enzyme like selectivity – >99.9% to methyl propionate from its raw materials – and activity (Figure 1). Because no byproducts are formed, the separation and purification of methyl propionate is very easy.

The manufacturing route to this phosphine was developed together with Peter Edwards at Cardiff University and then transferred to a specialist phosphine manufacturer.

The second stage catalyst has caesium oxide on silica as its active components and converts methyl propionate and formaldehyde at 350oC and 2bar with selectivities around 93% and 85%, respectively. The overall selectivity for the process based on the main feed component – ethylene – is higher than for the ACH process from acetone or C4 process from isobutene. Again, we did not attempt to manufacture the catalyst ourselves but worked with US companies that specialise in production of silicas.

Separation of reaction products at this second stage is important, as control of the water content of the reaction feed is critical to high selectivity. Separation of water from formaldehyde, whilst avoiding formation of paraformaldehyde, is covered by global patents as are the catalysts developed for the process.

Both catalysts required major development programmes in order to obtain commercially realistic lifetimes. The homogeneous palladium catalyst life increased from 100,000 turnovers (<10 minutes) to over 10m (15 hours) by careful selection of operating conditions and catalyst concentration, whilst the caesium silica catalyst lifetime increased from a few days to two–three years by inclusion of 1% zirconia.

Developments in the separations were focused on minimising the energy used in the distillations and in achieving adequate purity of MMA for polymer applications requiring high optical purity. Lucite had to develop proprietary purification schemes, which are protected by currently unpublished patents.

After confirming that we had a viable process in the lab, the next step was to demonstrate the technology. Working with Davy Process Technology, now part of Johnson Matthey, we selected a small scale pilot unit (500g/hour MMA) to verify the catalyst life and the process engineering models on which the full scale plant would be based. The decision to work on this scale proved wise in retrospect as we found several unexpected issues, which we were able to adjust to quickly; for instance, insertion of an extra distillation column available on the Davy site took one day of down time.

Over four years we exhaustively studied the process and the catalyst and were able to move directly to a full scale commercial plant without passing through a smaller scale, non-economic demonstration plant. Perhaps we did not save much time in this process, but the costs were a fraction of what they would otherwise have been. The key factors to achieving this 30,000 times scale up from pilot to full plant were to:

As a consequence of our bold, to some eyes even foolish, decision to omit the demonstration plant, the start-up was nerve wracking. However the first stage process reached 100% flowsheet rate in just three days and the second stage achieved this target in three weeks, delayed only by our reluctance to push the rate too high before we had first checked for any unexpected scale-up effects.

Against the expectation of nine months to flowsheet that we had been advised by external consultants for such a novel technology, this was a fantastic achievement. The plant has continued to work at full rate, aside from a short period soon after start-up when the stock tanks had been filled much quicker than expected and we had to wait for customers to test the product before full-scale sales could begin.

The plant performance has thrown up a few unexpected surprises, but we have been able to cope with all of them without turning down the production rate. Siting the plant in Singapore has proved a great success both in terms of the quality of the staff and the proximity to the markets least affected by the recession. The overall economics match almost exactly those predicted by the pilot plant trials.

The technology recently won this year's Innospec Technology Innovation award presented by the UK Chemical Industries Association and has been shortlisted for other awards that have yet to be judged.

Lucite regards the plant as a demonstrator for the technology and further substantial developments are in the pipeline to improve capital and operating costs. The technology is based on single stream units, which we believe can be scaled up to at least double and probably treble the Singapore scale. This will give huge economies of scale compared with old technology plants. The feedstocks of ethylene, methanol and carbon monoxide make the technology ideally placed for installation in locations with low cost methane and ethane. These opportunities are both being actively investigated.