The amount of money the EU’s top businesses spent on R&D in 2008 continued to grow, despite the recession, with research growth outstripping economic rivals Japan and the US. However, a large proportion of the EU’s R&D resides in businesses that invest a relatively small portion of their income in R&D, while the US is cementing its position in sectors that are extremely R&D intensive. Nevertheless, the EU has already built up a lead in alternative energy with growth in these companies accelerating rapidly. 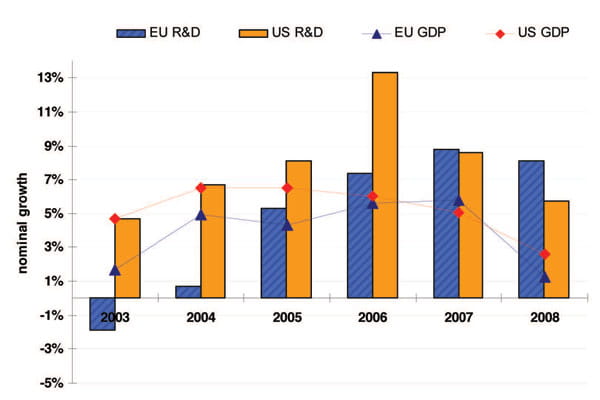 Each year the EU Industrial R&D Investment Scoreboard ranks the top 1000 EU companies and non-EU companies by investment in R&D. The EU’s top companies’ investment in R&D grew by 8.1% in 2009 (see figure), while US and Japanese companies’ R&D spend grew by 5.7% and 4.4%, respectively. World corporate R&D investment amongst these businesses grew by 6.9%. Japanese automotive firm Toyota took top place with the EU taking two places in the top 10 for German car maker Volkswagen and Finnish communications giant Nokia. The US is well represented in the top 10 by Microsoft, General Motors, Pfizer, Ford and Johnson & Johnson.

‘It is good news that EU companies kept up their R&D investment against the background of the economic crisis in 2008,’ said European Science and Research Commissioner Janez Potocnik. ‘I also welcome the increase of R&D investments by EU companies active in low-carbon energy technologies. They represent new sources of EU growth and jobs.’

However, ‘The problem that remains, particularly vis-à-vis the US, is the [EU’s] focus on the mediumhigh R&D sector,’ says Simon Collinson, professor of international business and innovation at the University of Warwick, UK. ‘The US has not only a huge proportion of its total R&D investment in the high tech areas, but that’s also growing quite smartly.’ High-tech, high intensity R&D areas are seen, in policy terms, by the EU as extremely attractive. The EU, due to its large number of independent member states, Collinson points out, may suffer from the problem of the ‘large champion’, which the state supports, but often at the expense of competition.

Outside of the traditional R&D hotspots of the EU, Japan and the US, businesses in the emerging economies grew their R&D swiftly. China’s R&D growth stood at 40%, while India was 27.3% and Taiwan’s 25.1%. Collinson says that China’s top R&D businesses, such as Petrochina and telecoms firm ZTE, are state owned. By contrast India’s top firms, including Ranbaxy and Tata Motors, are polar opposites as they are private enterprises. ‘The triad multinationals dominate entirely… so it’s going to be some time before we see some of the champions from emerging economies popping up, but there’s no question that this trend is a signal of the future,’ Collinson says.