Why should chopping onions cause our eyes to water when garlic – another member of the Allium family – has no effect? Meriel Jones explores the quirks of Allium biochemistry

According to the Food and Agriculture Organization (FAO), annual world production of onions is currently around 55m t, with a further 12m t of garlic and 6m t of leeks, shallots, green onions and other leafy members of the Allium family. Although the majority are consumed where they are produced, up to 10 % of the volume is traded internationally, mostly as shipped containers of onions or garlic bulbs. Some, however, is sent as air freight – with consignments of spring onions sent from Mexico for sale in the UK being one brief casualty of the no-fly zone caused by the Icelandic volcanic eruption in April 2010.

Bringing tears to your eyes

China is the world’s major exporter as well as consumer of onions and garlic. Indeed, production of Chinese garlic is so far ahead of all other regions that the EU has import quotas to protect French and Spanish producers. As a consequence, garlic smuggling defrauded over €60m in 2006 alone, according to the European Anti-Fraud Office.

But why are Alliums of interest to chemists, other than in the kitchen? The answer lies in the sulphur chemistry that is the basis of their flavour. While an intact bulb or leaf will sit in your hand with only the slightest trace of odour, cut it with a knife and the smell of onion can literally bring tears to your eyes while that of garlic transports you to continental Europe.

The volatiles that immediately trigger taste and odour receptors are derived from a small number of stable alk(en)yl cysteine sulphoxide precursors stored within cells. Methiin (S-methyl-L-cysteine sulphoxide) occurs in all the Alliums and some other plants, notably cabbages. It is the source of odours described as ‘cabbagy’ or ‘fresh onion’. Alliin (S-2-propenyl-L-cysteine sulphoxide) provides the instantly recognisable aroma of garlic and other ‘garlicky’ perfumed plants.

German chemist Theodor Wertheim named this alkyl group ‘allyl’ in the 1840s after identifying alliin in an organic sulphide distillate from garlic. It was first synthesised by the Frenchman Augustus Cahours, in collaboration with Augustus William Hofmann, as explained in their January 1857 paper in Philosophical Transactions of the Royal Society. A third sulphoxide, its isomer (E)-S-1-propenyl- L-cysteine sulphoxide (isoalliin), is the major flavour precursor in onions and gives rise to their eye-watering effect. Propiin (S-propyl-L-cysteine sulphoxide) is also present as a minor component.

How these stable chemicals can be precursors of volatiles has intrigued scientists for many years. The answer involves two enzymes stored in a separate cellular compartment from the precursors. Cutting the bulbs breaks the cells and allows the flavour precursors to mingle with the first enzyme, alliinase, a C-S lyase that rapidly cleaves them to yield pyruvate, ammonia and unstable sulphenic acids. From then on, except in onion, a large series of sulphur compounds are generated through purely chemical reactions.

Pairs of sulphenic acids react in the vapour phase to give thiosulphinates that generate further sulphenic acids and mixed disulphides. Well over 100 compounds have been identified during these reactions, with the exact atmospheric composition changing over time. Several have been named after the Alliums, including cepaenes and zwiebelanes. In garlic the major initial volatile is allicin (di-2- propenyl thiosulphinate), which decomposes to give sulphides including di-allyl disulphide (di-2- propenyl disulphide, DADS).

The sulphur volatiles can also react with soluble chemicals remaining in the garlic or onion tissue and one consequence can be blue and pink coloured compounds. These are pyrroles produced by reaction between the alkyl disulphides and aminoacids and can polymerise into structures similar to phycobilins. This has traditionally been exploited in China to produce coloured pickled garlic for the spring Laba festival, but can be a problem in the food processing industry.

Surprisingly, given the chemical similarities in their flavour precursors, onion does not produce even trace amounts of the thiosulphinates and sulphides predicted from garlic.

Instead, the dominant initial volatile is the eyewatering propanthial-S-oxide (lachrymatory factor, LF) that gives onions their distinctive pungency. This mystery was finally solved in 2002 when a second enzyme in the flavour system was discovered in onion, proving that its flavour is produced by two successive enzyme reactions, not one as in garlic. Researchers led by Shinsuke Imai working at House Foods in Japan and the universities of Tokyo and Kyoto showed elegantly that while ‘alliinase’ from onion produced the correct eye-watering effect from pure synthetic isoalliin, alliinase from garlic did not. They went on to isolate a new enzyme [lachrymatory factor synthase, LFS] from onion and obtained the sequence of its gene. This directs the decomposition of the products of the alliinase reaction, to give propanthial-S-oxide. Their onepage brief communication in Nature ended with the suggestion that suppressing this new enzyme might be the way to new flavours in onion. 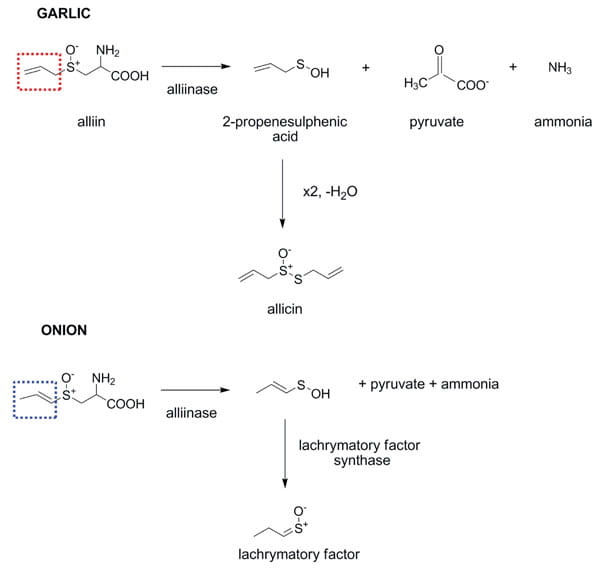 Onion flavour is important to the international onion industry. When cooking with onions, predictability is important. Ideally, a salad needs a mild hint of onion aroma, while a stew needs much more to survive the lengthy cooking process. The strength of onions is related to the level of lachrymatory factor, and therefore its precursor isoalliin, before it decomposes to other less irritant products. Onion marketers knew that onions varied in strength even between bulbs from the same field and changed during storage.

The problem with assessing flavour was that the human food palate cannot cope with more than a few onion samples before becoming unable to distinguish anything, and the individual volatile odour chemicals are short-lived and difficult to analyse routinely.

With increasing pressure for quality control in the 1990s, an internationally recognised system developed around the stable compound pyruvate that is formed in equal amounts to the flavour volatiles during the alliinase reaction. Its application to onions in the UK, in trials involving Warwick HRI and my colleagues at the University of Liverpool, supported by the Department for Environment Food and Rural Affairs (DEFRA), growers and supermarkets, has led to much better market categorisation and opportunities for new market sectors including sweet – Supasweet – onions since 2003. These have very low levels of pungency so that sweetness from sugars stored in the onion bulb can be perceived.

To support rapid assessment of onion consignments, a pyruvate biosensor system was developed in a subsequent collaboration involving UK biosensor specialists at Cranfield University and biotech firm The Gwent Group based in Pontypool. The current direction of research in the UK, again with DEFRA support, is to investigate changes in flavour and other quality traits caused by storage.

A new EverMild sweet onion variety released to the US consumer in February 2010 by producers, including Monsanto, is specifically tested to ensure low levels of lachrymatory factor. However, the discovery of lachrymatory factor synthase (LFS) has opened exciting new approaches to onion flavour. It is now possible to search for onion varieties with a natural malfunction in the LFS gene and to screen chemical libraries to find inhibitors of the enzyme.

Colin Eady and colleagues in New Zealand and the scientists of House Foods in Japan have spent over 10 years on the technically challenging development of a system to knock out any specific gene in onions. Applying this to LFS showed that isoalliin breakdown was very different in the resulting onions. Lachrymatory factor was now very low, and there were significant amounts of 1-propenyl sulphenic acid and its dithiosulphinate product. The spectrum of further chemical products also changed so that some that had only been detected at trace levels were now readily identified by GC-MS systems. These included zwiebelane isomers and 2-mercapto- 3,4-dimethyl-2,3-dihydrothiophene, resulting in a sweeter aroma reminiscent of cooked onions.

Food would not be the same without onions, garlic, spring onions, leeks, chives and their relatives. Perhaps in the future we can look forward to new varieties with the sweet but savoury flavour of cooked onions when raw, hints of pungency in garlic and more colours.

Alliums and their health benefits

As well as their importance to flavour, there is evidence that the sulphur compounds of onion and garlic can give health benefits. Folklore attributes Alliums’ efficacy for almost everything from preventing hair loss, curing flu to treating athlete’s foot. Surprisingly, they are also reputed to have aphrodisiac properties!

However, modern epidemiological studies agree with tradition that garlic consumption reduces the risk of cancer, particularly gastric and colon cancer. This may be related to its antibacterial properties but could also result from the reactive garlic constituents preventing formation of mutagens that damage DNA.

There are frequent suggestions that garlic prevents cardiovascular disease and some studies have shown antithrombotic, antioxidant, lipid-lowering or immunomodulatory effects, although sometimes with unrealistically high levels of garlic constituents. In 2004, however, a multinational project funded by the EU that used well-characterised garlic powder in a double-blind, randomised, placebocontrolled trial to measure biomarkers of lipid metabolism and vascular damage, could not demonstrate any significant differences between volunteers given garlic and those on placebo.

Any health benefits from onion and garlic, meanwhile, could come from compounds other than their flavours. Onion contains tasteless but antioxidant flavonoids, primarily the flavonol quercetin and its glucosylated forms. There are epidemiological correlations between diets rich in flavonoids and lowered risk of coronary heart disease. Onion varieties differ, but some are towards the highest content of flavonoids in any fruit or vegetable. They also provide dietary fibre in the form of fructans, polymers of fructose sugar that may improve health by promoting beneficial intestinal bacteria and digestive transit.

Finally, one more touted health benefit of garlic and onions comes from their selenium content. Onions grown in soil enriched with selenium synthesise some selenocompounds by ‘mistakenly’ substituting selenium, the next element in its periodic group, in place of sulphur. Selenium is an essential micronutrient and the UK diet often does not meet the recommended dietary allowance. The ubiquitous presence of onions from crisps to haute cuisine has been suggested as a way to increase selenium levels modestly, thereby benefiting processes that require it, such as fertility and the immune and cardiovascular systems.

Meriel G Jones is a senior lecturer at the School of Biological Sciences, University of Liverpool, UK.