The discovery of a therapeutically useful pharmaceutical compound is just the first step in a long chain of events leading to the launch and production of a new drug.

On average, it takes between 10 and 15 years for a new drug to reach the clinic after its initial discovery. Pharma companies typically apply for patent protection at around year five, often leaving them with only 10 years or so of exclusivity on the sale of their new drug once it reaches the marketplace.

Being first to market is critical. Once a particular brand of drug has been approved, any potential competitor products seeking to gain market entry would need to be significantly better than the drugs they aim to replace.

For each drug successfully launched by a pharmaceutical company, as many as eight or nine others never make the grade. This is usually because of problems associated with the efficacy or safety of the drug, or side effects – problems that often only become known after costly and time-consuming clinical trials have taken place.

Traditionally, the pharmaceutical sector has enjoyed high profit margins. Partly this is down to the need to recover the huge losses made in the R&D and clinical trials process for the 80 to 90% of drugs that don’t make it to market. Additionally there are other pressures. Increasingly, there is a need for developed countries to reduce their healthcare bills, whilst at the same time societal pressure is growing to get medicines to the developing world faster and cheaper. With such a high attrition rate, and in an increasingly competitive marketplace, drug companies are constantly on the lookout for new and innovative ways to speed development and reduce the number of drugs that never make it to marketplace.

The process of drug crystallisation, for example, is a key part of the drug development process and has long been recognised as just one of the major bottlenecks in bringing drugs to market more quickly. Organic compounds identified as having the properties required for pharmaceutical products are generally not easily soluble in their raw form. Hence, the need to engineer them into a form that allows for bioavailability, safe levels of toxicity and the stability required for a reasonable shelf-life.

Molecules that are too rigid in their make up are generally not appropriate for drug development. Conformationally flexible compounds that can broken down by enzymes are much more useful. If molecules are too stable, they are expelled by the body and can potentially affect our water supplies: think of DDT, or much discussed issues with increased levels of oestrogen in our water supplies. However, this same flexibility can also create problems for drug developers by opening up the possibility of polymorphism – the ability of molecules to form structures with different geometric arrangements.

Polymorphism is a massive issue for drug companies – most organic molecules, when they are crystallised, can present as polymorphs. The unpredictability of molecules with polymorphic properties can lead to huge delays in getting approval, legal challenges and even withdrawal of drugs from the marketplace.

First discovered in the late 1970s, ranitidine hydrochloride, the anti-ulcer H2-antagonist was a blockbuster drug for Glaxo SmithKline. Marketed as Zantac, it reached sales of $3.5bn in the early 1990s. However, there are two polymorphic forms of ranitidine hydrochloride and both have been shown to have the same therapeutic effect. This led to a long period of patent litigation during the 1990s between Glaxo, Novapharm and Genpharm, at a substantial cost to all.

Polymorphism can also occur serendipitously long after the molecular drug entity is discovered. Abbott’s AIDS treatment drug ritonavir (Norvir) had to be withdrawn for almost a year and a new formulation developed following the discovery of a new polymorph precipitated from the formulated product.

The wrong crystal form can potentially increase or decrease toxicity, affect efficacy and also have an impact on bioavailability. To make stable drugs, the appropriate crystal form must be standardised and, whilst this might be easy to do this in the laboratory, it is often more difficult to achieve during scale up of the process ready for manufacture.

Researchers generally consider the best way to deliver a drug quite late on during its development, at the pre-production stage. Most are delivered orally, either as tablets or in suspension, both of which require a lengthy process that includes crystallisation.

Technologies that address some of these crystallisation issues, and which take into account the whole of the pharmaceutical development cycle – from developing the active pharmaceutical ingredient (API) through subsequent formulation steps, such as blending, granulation and compacting – could have a significant and lasting effect on the efficiency and profitability of the industry. Over the past 25 years, academic research teams have made great headway, and recent technologies have made the possibility of a more robust, efficient and reliable drug development pipeline a real commercial reality.

At the University of Leeds, we have worked with many of the largest companies in the drug world, including AstraZeneca, Pfizer, GSK and Abbott. From these research projects, a raft of new predictive and experimental technologies have been developed and, over the past decade or so, we have begun to apply this expertise to meet growing calls from the pharmaceutical and fine chemicals industries.

In December 2009, my own research group at Leeds, for example, reported on new in silico technology1 for modelling the process of drug crystallisation in the laboratory. Although the science behind in silico technology is well established, its application in a form that’s useful to industry is in its relative infancy. Our methodology will allow companies to determine crystal shape and size as well as to predict the influence of the processing environment on crystal size and shape. It can also examine binding sites and particle-particle interaction – all crucial elements of ensuring the correct crystal form for optimal formulation and making sure that an API is going to have consistent properties.

To demonstrate the potential of our molecular modelling software, we used it to establish molecular models for acetylsalicylic acid (aspirin) and ascorbic acid (vitamin C) and then to model inter-particle interactions for the two compounds. The latter information is useful to determine what is happening at binding sites between the different particles, which can have a significant effect on crystal structure and shape. 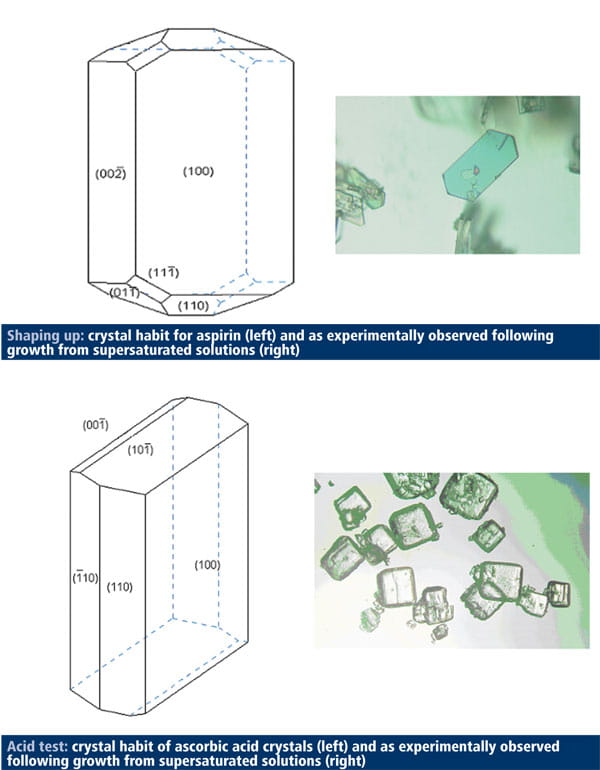 Work is currently under way to develop the computerised modelling tool. We envisage this being used by industry initially to look at likely drug candidates in the discovery stage of the process, and also to predict downstream processability. The software tools will allow drug developers to design the desired crystal form on a computer, which should mean less waste of materials and less wasted time – and researchers will be more informed before the laboratory work takes place. Such a ‘bottom up’ approach to crystal formation would be a major step forward for the pharmaceutical sector. It will enable greater control, less time spent on drugs that aren’t going to make it to market and ultimately, a quicker time from idea to on-the-shelf drug.

Crystallisation and processing have long attracted funding from scientific research councils. There has been no eureka moment as such, more the culmination of many years work and the development of a number of technologies through research projects with industrial partners and academic expertise from other universities.

Take, for example, processing technologies developed over the past three years, including a paper in 2008 showing online crystallisation monitoring technology.2 For the first time, scientists were able to identify and monitor changes in crystal structures online, viewing their formation in real time in the reactor. If one can see what’s happening while it is occurring, there is a greater chance of optimising the manufacturing process. Further research has led to the development of a method of using process analytical technology (PAT) tools to characterise particle shapes using a probe that collects images of the crystallisation process.

Yet further research includes the use of infrared spectroscopy to monitor supersaturation and selfassembled monolayers that assist the process of nucleation whereby crystals begin to seed their own formation and growth. This is just a snapshot – there are a raft of technologies in development that will help drive forward the sector.

Researchers at Leeds University are now preparing to make expertise housed here available commercially. The Institute of Process Research and Development (iPRD) was set up to support the fine chemical and pharmaceutical industries in 2008 to work in partnership with industry to find improved ways of producing chemicals.

The iPRD is home to a new £3.45m process laboratory funded by regional development agency Yorkshire Forward and the European Regional Development Fund. As a centre of expertise, it brings together researchers from the university’s schools of chemistry and environmental and materials engineering, and industry. The institute has also established a subscription-based industrial ‘club’ of pharmaceuticals, agrochemicals, fine chemical and technology companies, which collaborate with iPRD on a project-by-project basis.

The iPRD provides a foundation upon which we can continue to build our industrial partnerships. In particular, the new in-silico approach to pharma development and manufacture is likely to prove a draw for many companies. If we can design the molecular composition of drugs, examine bioavailability, stability and toxicity and also look at processability upfront, right at the beginning of the drug development cycle, we’ll be able to help companies save a lot of time and ultimately, cost.

In silico modelling: Perhaps the gold standard. This computerised method of predicting crystal structure and growth, coupled with the ability to predict processing issues could revolutionise the way in which the drug discovery and development process works.

Online powder X-ray diffraction: This technology identifies and monitors changes in crystal structures online and is based on powder X-ray diffraction, which is the primary tool for studying polymorphs. It has been designed to help process optimisation by enabling companies to view crystallisation in real time and react to process fluctuations.

Characterising particle shapes with PAT: This involves essentially ‘filming’ what happens inside a reactor, for the optimisation of crystallisation processes. The technology was developed by Leeds researchers using a probe designed and built by Perdix, in combination with Morphologi commercial image analysis software from Malvern Instruments.

Infrared spectroscopy: Using a probe attached to an infra-red spectrometer, researchers can measure the concentration of a specific chemical in solution. This information is then coupled with chemometric data and can provide a more detailed analysis of the crystallisation process than is possible with other infrared techniques.

Self-assembled monolayers: Introducing a self-assembled monolayer - a layer of self-organising molecules, which are attractive to the substance being crystallised – into a reactor can enable well-defined consistent crystal formation. Self-organising molecules gather together to form a layer that sits on the surface – similar to the way in which oil sits on top of water.

Co-crystallisation methodologies: Co-crystallisation involves the creation of crystals from two organic compounds bound together with hydrogen bonds – a process that provides greater stability when compared with salts. Recent advances have shown a generic and scalable methodology for the formation of standard co-crystals for optimum performance and product attributes.

Kevin Roberts is Brotherton professor of chemical engineering at the University of Leeds, UK. 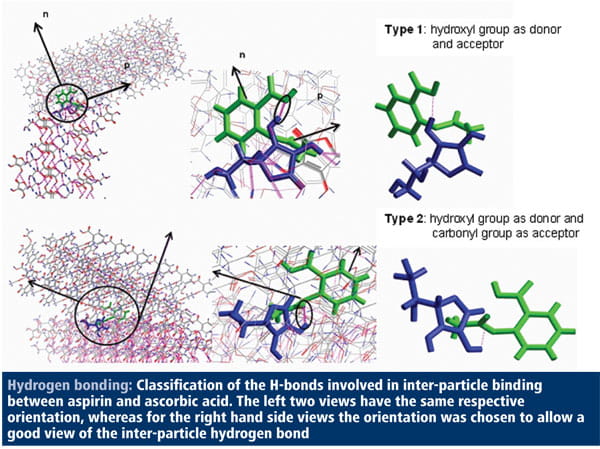