Switched on to biopolymers 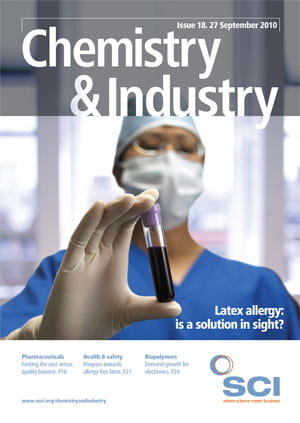 World demand for synthetic polymers is expected to grow from 250,000 kt/year to more than 1m kt/year during the current century, due to a combination of increased prosperity and world population growth. If this forecast is met, then the world will need a quarter of the oil it currently produces for making plastics alone by the year 2100.

Economic (cost of oil), ecologic (climate change), and technology (white biotechnology and bio-based polymers) developments are driving the change from fossil based to bio-based polymers. Currently, the bio-route is reported to be cheaper than the fossil-route at oil prices above $50/barrel. This cut-off point will further decrease as new biobased technologies develop, while the performance spectrum of bio-based polymers expands rapidly. In fact, the cost–performance balance of many of these materials is quite competitive already, while for others work on white biotechnology processes and on economies of scale are helping progress towards economic sustainability.

Additional drivers for consumer electronic markets are the use of renewable raw materials, in combination with measures to reduce energy consumption and CO2 emissions throughout the value chain for branding purposes. New functionalities, or the convergence of functionalities offered by bio-based polymers, are also attracting attention.

Initial market interest in bio-based plastics came from producers of one-time-use applications or applications that generate a lot of plastic waste. Every year, for example, we discard 365m mobile phones, 3.7bn plastic cups, 350bn plastic bottles and 3,750bn plastic bags. Biodegradability was considered to be the most important property, although it is a mistake to think that bio-based polymers are biodegradable, since most of them are not. Several oil-based polymers are biodegradable, but don’t contribute to energy or to CO2 emission reductions. To call these ‘biopolymers’ is misleading.

In more recent times, the focus has shifted towards thinking of bio-based polymers as a means of moving away from fossil fuel feedstocks and lowering CO2 emissions. Although the bio-based polymer business is only 1000 kt/year or 0.4% of the total polymer business in 2010, current annual growth rates are 30%. New technology developments and related product introductions could further boost these numbers during this decade. In fact, the number of new polymer introductions that are wholly or partly based on renewable feedstock is comparable to the number of new oil-based polymer introductions 60 years ago (Figure 1).

Renewable raw materials are developed and used for bio-versions of existing polymers and for new polymers. Figure 2 shows the development stages for several bio-based polymers. For many polymers, a stepwise approach is taken by fi rst making them partly bio-based, but eventually they will be entirely based on renewable resources.

Based on the state-of-the-art technologies, polylactic acid (PLA), polyurethane, starch, and polyethylene (PE) are expected to be the dominant contributors to the growth in biopolymers – thermoplastics and thermosets – in the next five years. However, tremendous R&D and capital investments are being made around the world to advance product and application technologies for polymer groups including bio-polypropylene, PLA, polyhydroxyalkanoates (PHA), poly(butylene succinate) (PBS), polyamides, unsaturated polyesters – composites and resins, natural fi bres such as bamboo and kenaf, and polymers based on new renewable building blocks like isosorbide, itaconic acid, succinic acid and furanics. In a number of countries, including Brazil, China, Japan and the US, local authorities stimulate these developments and capital investments through large subsidies.

Although much is said about bio-based thermoplastics, bio-based thermoset products and businesses develop faster, since these polymers can often be produced in existing equipment, so capital investments are not that high in many cases. 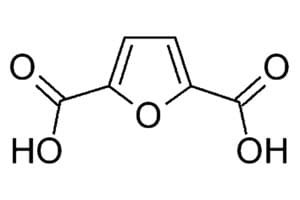 Polyamides are a well-known class of polymers often used for consumer electronic applications. They are traditionally made from fossil resources, as polycondensation products like PA-6,6 produced by the reaction of a diacid and a diamine, or products made through ring-opening-polymerisation of a lactam, like PA-6 from -caprolactam. Polymer property design of polyamides is often by varying the chemical nature of the monomers: long versus short monomers, aliphatic versus aromatic monomers, or by making use of more than just two monomers. However, a few efforts are now also under way to make polyamides wholly or partly bio-based by manufacturing the monomers from renewable resources.

A growing number of renewable monomers for thermoplastics and for thermosets are now being investigated for cost attractive manufacturing through white biotechnology routes, while several of them are on the market already. A distinction can be made between monomers that used to be produced from fossil resources and monomers that are based on renewable resources and bring differentiation options to the polymer industry. There are several examples of bio-based monomers that are relevant for thermosets, but are still produced in small quantities or are in the development stage.

Itaconic acid, isosorbide, isoidide, long chain diols, diacids, and diamines and 2,5- furandicarboxylic acid (FDCA), for example, are all examples of renewable monomers that are being developed and investigated for use in thermosets, thermoplastics, and composite materials (Figure 3).

Recently, isosorbide has come to attention as a potential replacement for bisphenol-A, an intermediate in the production of polycarbonates (PC) and in epoxy resins that has been linked to various adverse health impacts including infertility and birth defects. The cyclo-aliphatic structure of isosorbide is likely to give some extra rigidity to the polymer chain and better UV properties, but the question is to what extent that will suffi ce to replace some of the existing resins. Moisture sensitivity appears to be worse compared with the original PC. A 300 t/ year demonstration plant is under construction in Japan for Bio-PC based on isosorbide. Mitsubishi claims that the material has better optical properties than traditional PC and comparable to polymethyl methacrylate (PMMA). It has mechanical properties comparable to traditional PC, however, and has a glass transition temperature (Tg) – above which the material changes from a solid state to a melt – of about 130 oC. This combination of properties makes the material suitable for functional optical films for fl at panel displays.

Currently, the newly developed bio-based FDCA is being investigated for use in thermosets and also for thermoplastics: polyesters, polyamides, and polyester amides. The developer of FDCA, Avantium, expects that the cost of this new monomer to the polymer industry will be $600- 800/t when produced at scale. In the meantime, a whole series of new polymers is being evaluated for potential in the near future.

Original equipment manufacturers like Dell, Fujitsu, NEC, Nokia, Philips, Siemens, and Sony have mainly focused on commercially available bio-based polymers, and have shown a growing interest in new bio-based polymer developments and in biodegradable and bio-based polymers for packaging their electronic products. Many have also been making progress in house to improve polymer functionality.

So far, Dell’s focus has been predominantly on sustainable materials and certifi cation of packaging applications for its products. To that effect, it has been looking at the first wave of bio-based and biodegradable polymers. Many of their competitors go a step further and look at durable materials. 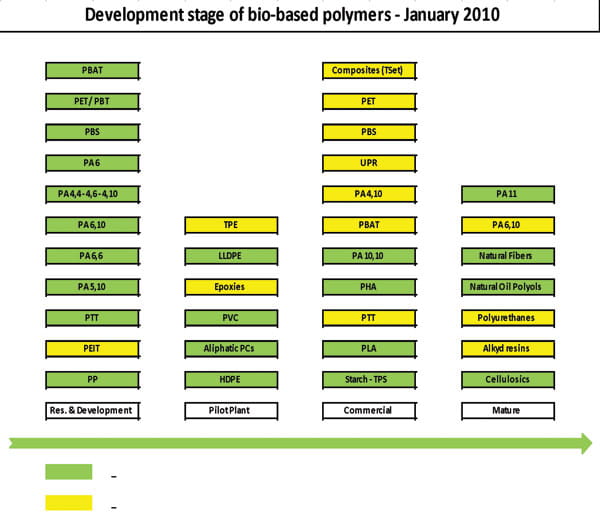 German company FKuR has developed Biograde C 75 CL, a cellulose acetate based compound used for the keyboard of a Fujitsu-Siemens computer. Japanese Electronics company NEC has developed a PLA/kenaf composite resin with 90% biomass, produced by Unitika, to replace glass reinforced polycarbonate composite for cellular phones, commercialised since 2006. Other developments by NEC are a flame retardant PLA for personal computer housings, a shape-memory PLA composite based on thermo-reversible crosslinking, and heatconductive PLA composites based on carbon fibre modified PLA for mobile phones and notebook PCs. The company is aiming to use renewable raw materials to supply at least 10% of its total polymer needs in 2010, and more beyond that.

Nokia developed and introduced its 3110 Evolve in 2008, a mobile device with bio-based covers made from more than 50% renewable material. The device is presented in a small package made of 60% recycled material and it comes with Nokia’s most energy efficient charger yet, using 94% less energy than the Energy Star Requirements for such products, as defined by the US Environmental Protection Agency.

Philips has developed a new vacuum cleaner consisting of 25% bio-based plastics and 50% recycled plastics. During the development process, the company adopted a lifecycle approach to determine the product’s overall environmental improvement and aimed to achieve an environmental impact improvement of at least 10%, compared with the most competitive product then on the market. It includes a new high energy motor to save energy, which makes it 35% more efficient than other green vacuum models on the marketplace, uses >90% recycled materials for the packaging and 100% recycled materials for leaflets, and is 97% free of PVC to limit the use of halogens.

Last, but not least, it is worth mentioning the efforts of Sony to develop bio-based polymer solutions for a broad range of applications in mobile phones, camcorders, laptops PCs, portable audio applications, home video/audio and TVs/displays. Of course, requirements for flame retardancy and heat resistance still stand. Today, the company already uses bio-based PLA and polyamides for some applications, but aims to further evolve this.

The impact on waste disposal resources, both landfills and incinerators, is a practical concern for many governments. The principle ‘reduce, reuse, recycle… and in that order’ is practiced, but not enough. When a waste stream has to be recycled, there is the choice to recycle it to polymer, to chemicals, to energy, to energy through anaerobic digestion, and to compost by controlled composting. The nature of the waste stream determines the best option in this respect.

Although biodegradation is a useful property for some applications, uncontrolled biodegradation is a wasteful end-of-life option. Options like reuse, material recycling, conversion to chemicals, and anaerobic digestion or incineration for energy recovery, are ever more preferred, but require human discipline to properly collect and treat the waste streams.

The growing demand for plastics cannot be satisfied by oil in the longer term. Also, the need to generate no more CO2 than we consume becomes ever more important. Waste from electronic equipment has value as a material, raw material or energy source. It will take decades to convert the polymer industry from fossil fuel to renewable resources, but this also offers new business opportunities, especially in durable applications like consumer electronics. The business of renewable resource based plastics is still small, but major global efforts and investments will boost their development significantly.

Jan Ravenstijn is a consultant to biopolymer companies in America, Asia, and Europe and is based in Meerssen, The Netherlands, Email: j.ravenstijn@kpnmail.nl.

A full review on all bio-based monomers and polymers can be found in the report The state-of-the-art on Bioplastics: products, markets, trends, and technologies. Copies can be obtained through the website: http://www.lifetecvision.com/Shop. aspx?ReportGroup=2501