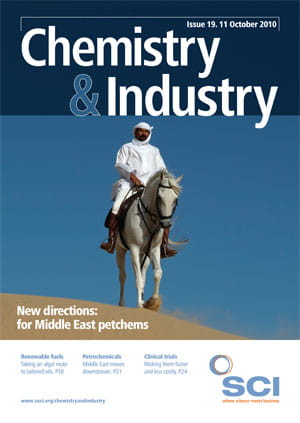 A report has calculated the contribution that chemistry makes to the UK economy and it comes to a whopping £258bn each year. This means that one in every five pounds generated by the UK economy is dependent on research by chemists or the chemical industry. The report comes just in time to make the case for preserving science funding as government ministers are expected to announce swingeing science cuts in the 20 October 2010 spending review.

Research consultancy Oxford Economics conducted the work and found that 800,000 jobs depend on the upstream chemical industry. It identified a further 5.1m jobs that are dependent upon chemistry research, in areas such as textiles, aerospace, automotive and health care.

The Engineering and Physical Sciences Research Council (EPSRC) and the Royal Society of Chemistry (RSC) commissioned the report. An RSC spokesperson said that it was commissioned in 2009 as part of an effort to make the case for chemistry to the Business, Innovation and Skills department.

David Delpy, chief executive of the EPSRC, said: ‘The products of chemistry and other areas of science and engineering research are present in nearly every facet of the UK economy and these figures not only remind us of the remarkable return on our investment in chemistry research, but also of the imperative to continue developing world leaders in the field.’

Pete Collings, from Oxford Economics and one of the authors of the report, says it is not a stretch to credit chemistry and the chemical industry with contributing so much to the UK economy. He points out that the chemical industry requires ‘considerable supply chains’, creating jobs in the process. On top of this, chemistry is crucial in enabling virtually every other industry to operate. ‘Although it is hard to imagine, if there had never been any chemistry research it is questionable whether some of these industries would exist in the way they do today.’

He concedes that not all the research that is vital for these jobs was carried out in the UK, but points out that the analysis was a means of establishing the importance of chemistry, as a whole, to industry.

The report should be helpful in persuading the government that chemistry and the chemical industry has a significant role to play in the UK’s economic recovery. Scientists across the UK have recently been mobilised against expected funding cuts by the Science is Vital campaign, which has organised petitions, letter writing drives and a demonstration outside the Treasury in London on 9 October 2010.