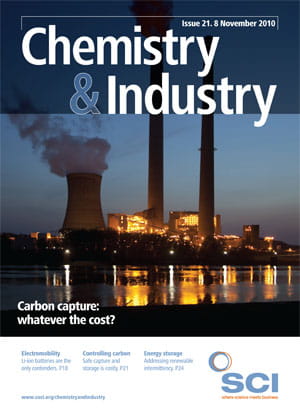 With fossil fuels widely expected to remain a significant part of the global energy mix until at least the 2050s, the idea of capturing the CO2 emissions generated by fossil fuelled power plants and burying them in secure underground repositories sounds like a sensible option. In the UK, carbon capture and storage (CCS) technologies represent a ‘massive opportunity’ – worth roughly £3bn for the country’s economy by 2020, according to secretary of state Chris Huhne, speaking at a CCS senior stakeholders conference in July 2010. Without them, Huhne warned that staying below the ‘dangerous’ 2OC rise in average global temperature as advocated by climate experts will also be ‘much more difficult and costly’. 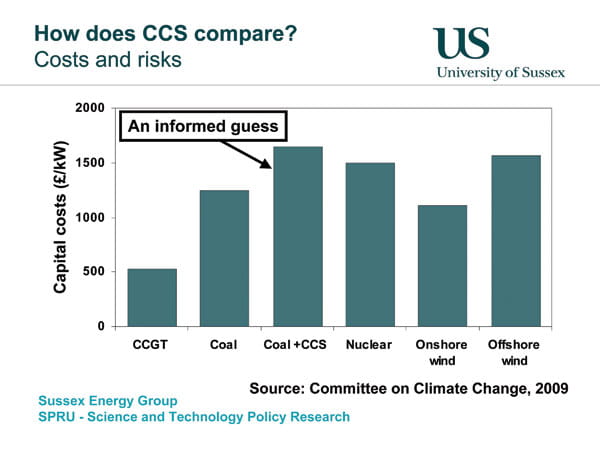 But CCS will be expensive – how expensive is still unclear – and it is only a stopgap that will allow us to continue using polluting fossil fuels until cleaner renewables become more widely available. One of the major drawbacks is that it is energy intensive; the processes of capturing and storing CO2 consume roughly a third of the energy generated by the power plant, which is not only wasteful but could also potentially lead to significant hikes in energy prices.

While most low carbon technologies such as nuclear and wind will also be expensive, said Jim Watson, director of the University of Sussex Energy Group, speaking at a Westminster Forum event on CCS in September 2010, the difference with CCS is that because it is still at such an early stage of CCS development, any cost estimates are merely an ‘informed guess’.

‘CCS, I don’t think, is as important for the UK as for some other countries,’ Watson continued. ‘If you think about China, the US and India, I think it is hard to see a future where they meet climate targets and CCS is not part of that picture. In the UK, we are fortunate to have a lot of [other renewables] options…’

The UK is widely recognised as one of the leaders in CCS technologies and is home to many of the world’s leading experts and technologies. As well as the possibility of creating a valuable export market for Britishmade CCS technologies, ‘the central North Sea is one of the best storage sites in the world and the aquifers there represent 40% of Europe’s offshore storage potential, meaning that it could store 40bn t of CO2, that’s all of the CO2 from Northern Europe’s power stations for at least 100 years,’ says Nick Horler, then ceo of Scottish Power - he stepped down in October 2010. Scottish Power is the last company to be shortlisted in a competition to win government CCS funding next year (see Box)

‘CCS is critical to the future of UK competitiveness because as we enter a world in which the price of carbon increases, access to affordable abatement technology will be a key determinant of global competitiveness,’ Horler adds. Despite the ‘uncertainties’, Watson agrees that CCS should be a priority for the UK because of the example this sets for countries such as China to hopefully follow.

Progress towards commercialising CCS technologies, however, has been frustratingly slow. Delays in obtaining funding for CCS demonstration plants have hampered progress, with many experts in the field saying that commercialisation is unlikely to happen until 2020, with ‘commercially feasible’ CCS available by the 2030s. The previous UK government had announced a competition to win £1bn funding for the first large-scale CCS demonstration project back in 2007, but a winner is unlikely to be declared until spring 2011. And while the current coalition government has committed to delivering a further three large-scale demonstration projects, no clear timescale has yet been agreed.

Securing private investment for CCS projects, meanwhile, is likely to be difficult not only because of the high project costs, but also because of uncertainty surrounding legal liabilities in the event that stored CO2 should escape from its underground repository, according to William Wilson, barrister, energy and utilities, at Burges Salmon. In the latest consultation paper on EU Directive 2009 – expected to be implemented in 2011 – on the geological storage of CO2, Wilson points out that the level of liability is still uncertain with no clear cap set. ‘I think parliament needs to consider the balance between limited liability regimes, promotion of new technologies, liability limits to make risks insurable, as against giving total liability in the event of an escape, Wilson said. ‘Who will actually invest in this and why? Part of the answer to that is how liabilities are addressed.’

Issues such as this will need to be ironed out soon. If the UK is to achieve its goal of reducing CO2 emissions by 80% by 2050, then we will need to have decarbonised the electricity system by 2030 – which would require equipping ca 40 gigawatts of capacity with CCS, according to Adam Dawson, chief executive and director of the Office of Carbon Storage at the Department of Energy and Climate Change (DECC). ‘That means going from a time now to a time only 20 years away when all of our generating capacity has to be equipped with CCS’; something that he describes as a ‘Herculean task’. Nuclear power alone won’t do the job, Dawson continued, as, although cheap, it is not flexible enough to cope with the changes in base load demand expected by customers.

While most CCS efforts have been mainly focused on coal, many in the field argue that the UK should be putting more emphasis on developing CCS with natural gas, which is more relevant to our own domestic energy needs. In the UK, roughly 47% of electricity generation is currently from natural gas plants, and this figure is likely to grow over the next decade, said Tim Fox, head of energy and environment at the Institution of Mechanical Engineers, referring to a recent DECC study, which he says showed that, in future, gas with CCS may one day be competitive with other renewables. Several CCS groups are calling on DECC to ensure that one of the demonstration projects will be a gas CCS project, although it is not yet clear whether they will be heeded.

One of the biggest factors determining the feasibility of CCS commercialisation, meanwhile, will be the cost of carbon. While many in the field believe the price will go up in line with efforts to meet climate change commitments, greater uptake of renewables could hold down carbon prices below the levels needed to stimulate investments, according to the European Commission’s latest EU Energy Trends to 2030 report published in August 2010. Assuming that national renewables energy targets are met, the report authors at the National Technical University of Athens, Greece, project that the carbon price will be €16.5/t CO2 in 2020 and €18.7/t CO2 in 2030, which ‘is not sufficient to allow additional investments in CCS technology’.

The real challenge for CCS, however, Ben van Beurden, executive vice-president of Shell Chemicals told journalists in London in September 2010, is how to do it in an integrated way that is economically viable. The other issue will be how the public responds to the technology; potentially, he pointed out that it could be as contentious as nuclear waste.

Others, though, are still questioning whether the proposed investments in CCS will be at all worthwhile. The global market for large wind turbines is worth $70bn/year and grew 31% in 2009, with over 38GWe installed, according to Gordon Taylor at GT Systems. The UK has around 30% of Europe’s wind resource, he points out in a comment at the end of the Westminster Forum report, adding that compared with CCS plants, large wind turbines ‘require no public funding for demonstration projects, and new jobs could be created immediately.’

Bio-energy with CCS – and algae

Another area that needs to be looked at more closely in future, according to Neil Crumpton of the Norway-based climate change organisation Bellona Foundation, is the potential for CCS with biomass energy sources. Applying CCS technologies to sequester CO2 emissions from power plants fuelled by renewable plant matter would have the net effect of making the business of energy generation carbon negative, he explained, as it would effectively capture and store the CO2 taken up by plants as they grow for good rather than releasing it back to the atmosphere when the biomass is burnt to produce energy.

‘The DECC Pathway Consultation Response out at the moment actually makes that point that BECCS, bio-energy with carbon capture and storage and direct air capture could be major contributors to reversing global warming quickly and getting parts per million down to 350,’ Crumpton pointed out. In the future, he speculates that algal biomatter, imported from places such as the Sahara desert where it could be efficiently cultivated, could help the UK meet its climate change obligations.

In May 2009, Scottish Power’s Longannet coal power station in Fife, Scotland, became the first in the UK to test out the carbon capture technology. The energy company has been running a 1MW post-combustion carbon capture retrofit at the 2400 megawatt power station for over 3000 hours, and is the only firm now in the running for government’s CCS competition, following E.ON’s withdrawal in October 2010, due to the economic conditions. A spokesperson from the UK Department of Energy & Climate Change said the government was disappointed that E.ON is not proceeding, but emphasised that Scottish Power will have to wait until 2011 to see if it will receive government funding.

Speaking at the Westminster Forum event in September 2010, Scottish Power’s now former ceo Nick Horler noted that the initial test work has already highlighted potential pathways by which it may be possible to make energy savings during the capture process, as well as providing insights into operating CCS on a working plant.

If awarded the £1bn government CCS contract next year, the company plans to extend the technology to a 300 megawatt unit at Longannet. ‘Once operational, the capture technology will reduce CO2 emissions by 90% … That would be the equivalent to taking one million cars of the road,’ the company claims.

‘Not only this, but by putting CCS in we will be able to extend the life of existing plant in the UK, and if we can do this at Longannet then we can apply the technology to the thousands, to the tens of thousands of fossil fuel power stations around the world, reducing carbon lock-in,’ he added.

At Longannet, Horler says he is confidant that CCS will be up and running by 2014, and fully scaled up by 2014. While the UK has ‘developed a lead through this competition’, Horler warns that ‘the gap is closing’ and other countries are also stepping up their CCS activities. He points out that ‘the G8 has committed to 20 full scale demonstrations by 2020 and already the US, Canada and Australia have all committed more than €7bn, or their equivalent, to CCS,’ he says. However, he notes that Europe still has a ‘slender lead’ with France’s 30MW Lacq project, ‘the world’s first operating end-to-end project’.

‘Of course the UK has led the way before in other technologies and only to cede it to others. I ask the question – is this to be the case for CCS? I sincerely hope not.’