New and improved methods of minimally or non-invasive analysis are revolutionising investigations into the history of art and cultural artefacts. Michael Gross investigates

Our scientific understanding of how great works of art and other cultural artefacts were produced is often restrained by their importance and value, which rules out any procedures that could cause visible damage.

For instance, the composition of the varnish covering the famous and astronomically expensive violins and ‘cellos made by Antonio Stradivari from around 1665 until 1737 has remained controversial. Only at the end of 2009 could researchers in Paris present a detailed analysis on microscopic samples taken from five instruments made by Stradivari.1

Using a range of complementary methods, including Fourier-Transform Infrared (FTIR) spectroscopy, Raman spectroscopy, mass spectrometry and microscopy, the researchers found two layers of varnish, both based on materials that were readily available at the time, including anthraquinone lakes probably derived from cochineal imported from Central America. Lead author Jean-Philippe Echard concludes: ‘Stradivari did not use any unusual or secret ingredients, he was simply a master of his craft.’ 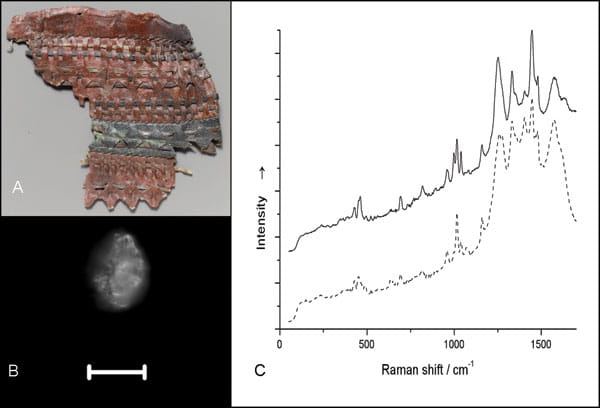 With new spectroscopic methods, researchers can now carry out similar investigations of extremely valuable museum pieces with microscopically small samples. Marco Leona, head of the department of scientific research at the Metropolitan Museum of Art in New York, US, has been involved in research making Surface-Enhanced Resonance Raman Scattering (SERRS) applicable to works of art since 2003. Leona started exploring SERRS soon after purchasing his first Raman spectrometer, when working at the Los Angeles County Museum of Art, and he recalls that the technique seemed ideal for one of the most difficult challenges of identifying organic colorants – used for dyeing textiles, or to prepare lake pigments – from the very small samples from precious art objects. After all, one of the key molecules used in SERRS experiments, Rhodamine 6G, started its life at the end of the 19th century as a textile dye.

In SERRS, microanalytical samples of materials such as coatings and dyes are dispersed and coupled to a colloidal support material, which has a doubly beneficial effect. Firstly, it quenches the fluorescent light, which in normal Raman spectroscopy is the major source of noise, and secondly, it enhances the Raman signal itself by a combination of mechanisms that is still the subject of investigation.

Leona and other researchers optimised the SERRS method for application with organic pigments found in artworks and archaeological finds. The improved method involves microwaveassisted reduction of silver sulphate with glucose in the presence of sodium citrate, resulting in a population of silver nanoparticles with a particularly narrow size range. Last year, Leona reported how the technique, applied to unique cultural treasures from the collection of the Metropolitan Museum, helped to shift important historical boundaries.2

For instance, the SERRS investigation of a leather fragment from an ancient Egyptian quiver, dated to the Middle Kingdom (2124-1981 BC), yielded a spectrum characteristic of madder lake. This discovery shifted the date of the first use of a dye extracted from a plant or insect source back by seven centuries.

However, according to Leona, the paper’s real importance is the fact that it presents a technique that can be used to rapidly and almost noninvasively screen a large number of objects. ‘By searching museum holdings for coloured artefacts, which could now be tested thanks to the limited sampling requirements of SERRS, our understanding of chemical knowledge in the ancient world could be significantly expanded,’ Leona commented. ‘Looking at older Egyptian material, or at objects from excavations in Mesopotamia, the Indus valley, or other areas where early civilisations were active could possibly yield earlier dates for dyeing technology, one of the most complex chemical industries.’

Other objects from the Metropolitan Museum that Leona analysed with this technique include a painting from the workshop of Francesco Granacci (Italian Renaissance) and two medieval French wood carvings representing the Virgin and Child. In both sculptures, he could detect lac dye, which is made from insects native to India and must have been quite rare when the carvings were made in the 12th century. The finding suggests that the two works may have related origins. Historic records of lac dye being traded in Europe only start several decades later.

While the samples required for the SERSS analysis are small enough to be invisible to the naked eye, a new NMR method promises the opportunity to investigate materials without any sampling at all.

Back in 1993, Bernhard Blümich and his graduate student Peter Blümler, working at the Max-Planck Institute for Polymer Research at Mainz, Germany, started developing a portable NMR detector for in situ analysis of materials. They realised that even the inhomogeneous magnetic field obtained with cheap permanent magnets can give valuable information about the composition of soft materials, such as paints or rubber. Specifically, they found that they could measure the decay time of spin precession after absorption of a radio frequency impulse, a parameter known to NMR spectrometrists as T2. After moving to the technical university of Aachen in 1994, where Blümich now holds a professorship in macromolecular chemistry, they developed a prototype which they called NMR-Mouse, which stands for MObile Universal Surface Explorer.

They tried it out on various materials and found they could detect characteristic signals for different kinds of materials, and they could look several centimetres deep into the material without even touching it. One of the first materials they tried was rubber; indeed, today the tyre industry uses the NMR-Mouse for quality control, to check the crosslinking of the rubber polymers. Scientists have also used the instrument to study Ötzi, the mummified Neolithic hunter discovered in a glacier in the Ötztal Alps in 1991.

Eleonora Del Federico at the Pratt Institute in New York, US, has used the NMR-Mouse to analyse the composition of oil components and stains on paintings with a view to providing information to help conservation efforts.3

Raman and NMR investigations are complementary tools, she says, as one is based on molecular vibrations and the other on the presence of 1H nuclei. ‘Raman is an extremely powerful technique for identifying pigment, dyes, corrosion products, gems, and many other materials, noninvasively in situ in works of art,’ Del Federico explains. ‘On the other hand unilateral NMR is a very powerful technique for determining moisture water profiles in wall paintings and wood, for following up consolidation treatments in different artistic media, such as paper, ceramics, stone, for characterising organic coatings, etc.’

The NMR work is now progressing from feasibility studies to real conservation work. ‘One of the problems that we are investigating is the degradation of wall paintings by salt crystallisation and efflorescence, which affects almost all wall paintings at Pompeii and Herculaneum,’ Del Federico says: ‘We are currently using the NMR-Mouse to follow up different proposed treatments in order to evaluate their efficacy, as well as to determine the humidity distribution and stratigraphy of one of the most precious wall mosaics in the ancient world: the mosaic of Neptune and Anphitrite.’ These studies are conducted in collaboration with Blümich, and Alessandra De Vita, at the Herculaneum Conservation Project.

Also collaborating with Blümich, Federica Presciutti and colleagues at the University of Perugia in Italy have already applied the technique to several old master paintings at the Galleria Nazionale dell’Umbria in Perugia,4 demonstrating that information about the layer structure, similar to the data obtained previously with invasive methods, can be gathered non-invasively and with high precision. And while sampling methods are always restricted to a small part of the object, researchers can use the NMR-mouse to scan its entire surface and obtain a complete map of its layer composition (stratigraphy). Moreover, as Presciutti explains, ‘the thickness of the layers can be measured and differences between various areas of the same painting can be highlighted. This kind of information can be relevant for conservation purposes.’

Presciutti and colleagues are also using the NMR technique to detect the compound cyclododecane, which is used as a temporary coating for porous materials including marble, paper and ceramics. As the substance sublimates at room temperature, this treatment is considered safe for the use on objects that require temporary protection in an emergency or for transport. However, conservators must ensure that the compound has evaporated completely before they apply any permanent coating, which could trap the hydrocarbon and lead to build-up of pressure inside the porous matrix and hence to cracks.

Therefore, Presciutti says, ‘our studies were focused on establishing a completely non-invasive strategy for monitoring the sublimation of the cyclododecane directly on the artwork subjected to the treatment. The NMR-Mouse allows us to determine how deep the cyclododecane penetrated into the material, and which method should be used to sublimate it’.5 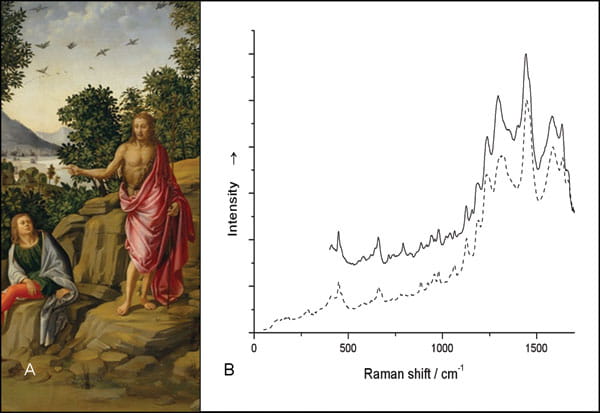 Scientists are enthusiastic about the new tools they have to study precious art works with. But what does the art world make of this? Martin Kemp, an emeritus professor of the history of art at the University of Oxford, UK, welcomes the opportunities to open new windows into the history of art. ‘Unless we understand how works of art were made as material objects, we really cannot adequately analyse why they look like they do, particularly after 100s of years of adventures,’ Kemp comments. ‘Every kind of question that concerns the art historian, from attribution and date to the physical production of works in their social context is enriched by scientific analysis. Happily, non-invasive or minimally invasive techniques are reducing the risks that the artworks might be damaged in the course of analysis.’

Michael Gross is a science writer in Oxford, UK.