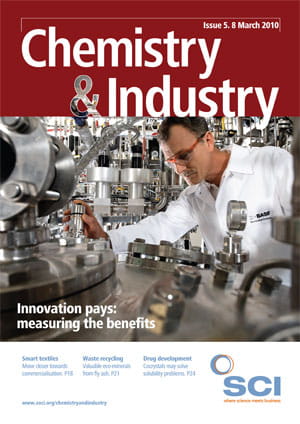 Formulating drugs as cocrystals could overcome the solubility problems hampering the development of some active pharma ingredients, reports Chris Frampton

If an active pharmaceutical ingredient (API) is going to be made into a successful tablet, capsule or inhaled drug formulation, it is vital that a suitable crystal form of the molecule is available – and all too often this isn’t as straightforward as it sounds. For example, the crystals must have a consistent structure every time they are made. Some molecules can crystallise in more than one way, and these different structures, called polymorphs, can have different physical properties. If the wrong form is made, then the drug formulation will go awry.

Polymorphs can cause real headaches for pharma companies. In the most famous example, a new, more thermodynamically stable, polymorph of Abbott’s HIV protease inhibitor drug ritonavir (Norvir) appeared out of the blue during manufacturing, even though only the more soluble form had been seen during development. This happened a couple of years after ritonavir had reached the market, and the capsule formulation had to be withdrawn as it was no longer effective, leaving patients with the only option of a liquid suspension of the drug. Creating a gel-capsule formulation that overcame the poor dissolution properties of the new less soluble, (more stable), polymorph was expensive and time consuming, and a further costly re-approval of the new formulation from the regulatory authorities was required before it could be supplied to patients.

At least there was a crystal form of ritonavir, even if it was unpredictable and unstable. Many drug molecules simply will not form a crystalline phase, and exist as amorphous solids, which often makes it difficult to formulate oral drugs from them. This problem can be overcome by creating a salt form. This can be as simple as a sodium or potassium salt if the drug contains a free acid group, or a hydrochloride or sulfate salt if it is basic. But increasingly creative and complex ions are now being seen, particularly for more lipophilic molecules. Examples include the erectile dysfunction treatment sildenafil (Viagra), which is formulated as a citrate; the hypertension treatment amlodipine besylate (Norvasc); and the antiarrhythmic and antimalarial drug quinidine polygalacturonate.

Overcoming poor solubility via salt formation works because it now contains charged species, and also disrupts the crystal lattice, creating a new crystal structure that is often more amenable to dissolution. However, salt forms can have other advantages, as other physical properties of the crystal will be changed too, such as hygroscopicity, melting point and chemical stability. All of these properties can cause problems in dosage forms as they affect the drug’s viability on storage. Salts can also be used to mask unpleasant tastes; and if a polymorphism problem becomes evident during development, with a single crystal lattice not predominating, then forming a salt may force it to make just one crystal form.

Salts can also be used to clean up active pharma ingredients (APIs) that will crystallise, but which contain persistent impurities. If the crystal structure includes molecules of residual solvent, for example, these can be very difficult to remove. If a salt of the API is formed, this can eject the solvent from the crystal by forming a different crystal lattice with smaller pores. The drug can either be left as the salt, or the counterion can be removed, giving the API as a pure material without either salt or solvent.

However, not all non-crystallisable drug molecules will form salts – it is impossible to make a salt of a neutral, non-polar compound. Even if a salt can be formed from a very weak acid or base, there is no guarantee that the resulting crystals will have the properties required for drug formulation; they may still have poor solubility, or a dissolution rate that is too slow. There is a link between these parameters and the crystal structure, as dissolving the crystals involves breaking down the crystal lattice, usually by breaking the hydrogen bonds that hold it together. So how can the crystal structure be engineered to create new crystals that may have the required physicochemical properties?

The answer may lie in the formation of cocrystals. These are crystalline compounds that contain two different molecules that pack together in a fixed way. The subtle difference between a salt and a cocrystal is that in a salt, a proton is transferred from one molecule to the other; in a cocrystal, the two are held together by weak interactions, such as hydrogen bonding alone. Like salts, cocrystals are homogeneous, but they are not necessarily a one-to-one mixture: the ratio might be two- or three-to-one, or a more complex arrangement like five of one to two of the other. Whatever the stoichiometry, the crystals always form with the same ratio of the different molecules and in the same arrangement, just like a normal crystal.

The second molecule, or co-former, is often an organic acid or base, such as benzoic, succinic acid or urea. It is impossible to predict which co-former will work best, but there are pointers that help identify what might work. The first step is to look at the drug molecule and identify functional groups within it that have the potential for forming interactions, such as hydrogen bonds with other molecules, for example, peptide linkages, carboxylic acids and amides. Then cocrystal partner molecules, with matching donor and acceptor groups, can be selected.

It can be difficult to work out whether a salt or a cocrystal has been formed, as the coformers are often molecules that could also form salts. Determining the crystal structure through single crystal X-ray diffraction is the best way that this can be established, as they often form very similar structures where powder diffraction patterns may be similar.

Some of the earliest work in this area was carried out by Bill Jones and Sam Motherwell at the University of Cambridge, UK. They took carboxylic acids and caffeine and ground them together to form the cocrystals. The larger single crystals needed for analysis can be made by growing them in solution. The ideal solvent here is one in which both molecules have similar solubility; if one is a lot less soluble than the other, it will tend to crystallise out first. The best results in the lab are often found by using a maturation method, where the solution, for example, is heated to 50°C, cooled, and then reheated, with this process being continued over a period of several hours. Other methods of energy input can also be used, such as sonication and microwaves. No one technique is suitable for every crystal – and the best option can only be determined by trial and error.

Another issue that has to be taken into account is the fact that for a drug, the co-former molecule has to be acceptable to the regulators – it needs to be non-toxic and should not affect the drug’s pharmacological properties. This is less of an issue in other fields where cocrystal technology has applications, such as agrochemicals, optoelectronics and organic semiconductors. In these fields, there are fewer restrictions on what co-formers can be used, and more emphasis on simply making it work.

No marketed drugs have been actively developed as cocrystals so far, but several companies are actively investigating them. There is, however, already one drug that is sold in cocrystal form, more by accident than design. Lundbeck’s antidepressant escitalopram (Cipralex, Lexapro) was formulated as an oxalate salt, but it is now clear that it is actually a salt/ cocrystal. The asymmetric unit of the crystal structure contains two APIs and two oxalates, and researchers originally believed that each API carried each a single positive charge, with each oxalate having a single negative charge. However, single crystal X-ray diffraction revealed that it is actually a doubly negative oxalate, and the 1:1 salt forms a cocrystal with the second oxalic acid molecule.

In one example we worked on at Pharmorphix, a cocrystal was used to improve the stability of an API. It had proved impossible to produce tablets from this particular API because every time an attempt was made to compress the tablets, they fell apart when they were removed from the compactor. The crystal form simply didn’t like the pressure. We solved its crystal structure, and it turned out that it had a layer-like arrangement, very similar to graphite, and there was nothing holding the layers together. So it was clear what the answer to the problem was – find a way of joining the layers together. By including urea in the crystal lattice, an improved material that was amenable to tableting was created as the urea acted as a linker between the layers.

It is already clear that cocrystals do indeed have potential to increase the apparent solubility of compounds with poor dissolution properties. A lot of work has been done in the area by Annette Bak and her colleagues at Amgen. These include a series of studies on cocrystals of AMG-517, a drug that was being investigated as a potential treatment for chronic pain. This compound had formulation problems because its poor solubility limited its absorption. A range of cocrystals of the drug were prepared, where the co-formers included diacids, triacids and amides.

The crystal structure could be determined for many of these cocrystals, showing that the hydrogen bonding network within the crystal was disrupted, which had an effect on its apparent solubility. However, there was no correlation between the solubility of the co-former and the cocrystals, which makes predicting which cocrystals might be soluble by looking at the coformer very difficult.

It is certainly possible to predict which coformers might form cocrystals with an API by comparing the hydrogen bond donors and acceptors of the two partners, but finding a cocrystal that has good solubility properties remains a case of trial and error. Similarly, there is no way of predicting the other properties of the crystals, such as melting point or hygroscopicity, with any degree of accuracy. The crystals may be very stable in themselves, but once they are put in a humidity chamber to test how hygroscopic they are, they may fall apart.

It is early days for cocrystals in the pharma industry, and a great deal more work is needed, not least on the pharmacokinetic properties of these crystals in vivo. However, they do provide drug formulators with another potential tool to overcome the problems that arise when an API is not sufficiently soluble, or dissolves too slowly, when it is impossible to form a salt. If the technique can help prevent otherwise good drugs from failing, then this form of crystal engineering will represent an important step forward.