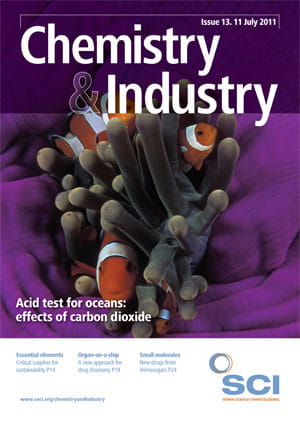 Iminosugars are monosaccharide analogues in which the endocyclic oxygen is replaced by nitrogen (Figure 1). Their resemblance to carbohydrates allows them to be recognised by, and interact with, carbohydrate receptors. In addition, they are chemically and metabolically stable; highly water soluble; can cross the blood–brain barrier; and are normally excreted from the body unmodified. Such properties distinguish them from other small polar molecules and provide significant advantage for their use as drugs.

Iminosugars have been made synthetically and isolated from natural sources for over 40 years. The first naturally occurring iminosugar was the glucose mimetic nojirimycin, isolated from Streptomyces. Further observations on the glycosidase inhibition profile of Streptomyces cultures resulted in the isolation of two additional iminosugars: nojirimycin B and galactostatin.

Since then, over 100 iminosugars have been isolated from natural sources, including plants. Although the structural diversity of the early compounds was limited, their biological activity was sufficient to elicit interest in their therapeutic potential.

As carbohydrate mimetics, iminosugars were initially of interest in modulating the action of enzymes involved in carbohydrate synthesis and metabolism. The natural product deoxynojirimycin, and its closely related analogues, for example, resulted in eight clinical candidates and two marketed drugs: miglitol (Glyset, Bayer) for the treatment of Type II diabetes and miglustat (Zavesca, Actelion) for the treatment of lysosomal storage diseases (LSDs), specifically Gaucher’s disease and Niemann Pick type C disease. LSDs are a group of over 40 rare inherited metabolic disorders that result from defects in lysosomal function, which is the cell’s waste disposal system. Disease occurs because of deficiency of a single enzyme required for the metabolism of lipids, glycoproteins or mucopolysaccharides, leading to a build-up of these compounds in the lysosome.

Despite these promising results, the early iminosugars failed to realise their true potential mainly because of their poor clinical selectivity to inhibit gastrointestinal glycosidases. In addition, iminosugars were generally perceived as being challenging compounds to work with because of their complex chiral and highly polar structures. However, with the appropriate synthetic strategy and judicious use of starting materials chemists overcame these difficulties and went on to synthesise more of these compounds. The wide variety of increasingly cheap molecules from the chiral pool and rapid progress in the development of specialised analytical methods mean synthetic access, purification and high cost of goods are no longer sufficient reasons to avoid iminosugars.

Since iminosugars exert their effects primarily on carbohydrate synthesis and metabolism, there are many targets that could be addressed with selective compounds. However, the therapeutic applications of these compounds extend beyond these targets and include, among others, polar active sites, matrix metalloproteinases and carbohydrate recognition domains. These areas are highlighted by recent reports on the use of iminosugars in a number of disease areas.

To date approximately 7000 rare diseases have been identified with several of these directly or indirectly involving carbohydrates. Defects have been found in the activation, presentation, and transport of sugar precursors; in the enzymes involved in their synthesis and metabolism; and in proteins that control the glycosylation machinery within the cell.

Iminosugars have been identified with activity in a number of rare diseases, including cystic fibrosis and LSDs. In the latter, iminosugars work in one of two ways: they either inhibit a specific enzyme in the synthetic substrate pathway, which is how Zavesca mediates its therapeutic effect in Gaucher’s disease – characterised by an accumulation of lipids in certain cells; or they act as an active site chaperone for the mutant enzyme, enabling it to achieve the correct conformation and function. Several iminosugars that work in this way are in clinical trials for LSDs, including Pompe’s disease – characterised by a buildup of glycogen in muscle cells; Fabry’s disease – an accumulation of fat in cells; and Gaucher’s disease. 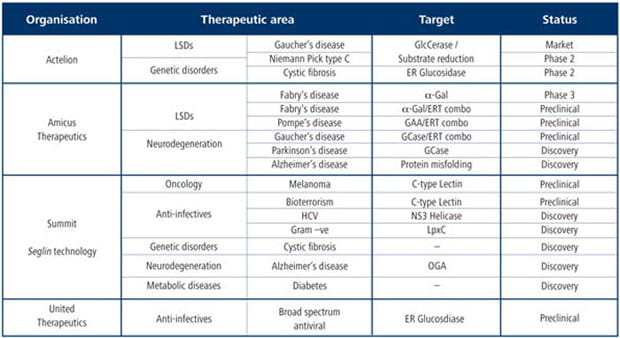 Iminosugars also offer potential as therapeutics to treat neurodegenerative conditions, such as Parkinson’s disease and Alzheimer’s disease. One therapeutically relevant pathway that has recently emerged involves the dynamic modification of serine and threonine on nuclear and cytoplasmic proteins by the monosaccharide, O-linked N-acetylglucosamine, O-GlcNAc. This modification is reciprocal to phosphorylation with both often occurring and competing at the same sites. Altered O-GlcNAcylation has been reported for several proteins involved in neurodegenerative disease, including Tau, which is associated with Alzheimer’s disease. In Alzheimer’s, Tau occurs in an abnormal hyperphosphorylated form with a reduced level of O-GlcNAc. While intense efforts have focused on developing kinase inhibitors for therapeutic benefit, little progress has been made to date. An alternative strategy would be to target the hydrolase enzyme – O-linked-β-Nacetylglucosaminidase (OGA) – which is responsible for removing O-GlcNAc from proteins. Inhibition of this enzyme may reduce Tau phosphorylation either directly through increasing O-GlcNAcylation of Tau or indirectly by modulating the activity of the Tau kinases. As carbohydrate mimetics, iminosugars are potential potent inhibitors of OGA and could therefore prove useful in treating Alzheimer’s and other related neurodegenerative diseases.

The emergence and re-emergence of infectious diseases presents science with one of its greatest challenges. A growing area for anti-infective drug discovery involves targeting microbial carbohydrate metabolic pathways. Carbohydrates are involved at various stages in the life-cycle of pathogens – in immune system evasion, host cell invasion or cellular integrity, for example. Several strategies have been used to target these processes, ranging from modulating the pathogen life-cycle to inhibiting cellular processes.

As our understanding of the glycobiology and biology of infection has increased, new opportunities have appeared for using iminosugars as selective and targeted anti-infective agents. These extend to targeting specific infection pathways, immunomodulation and the design of more potent and selective inhibitors of mammalian enzymes used by infective agents. Iminosugars have shown promise in targeting several bacterial pathways that have proven intractable to traditional medicinal chemistry, including lipid Aand peptidoglycan biosynthesis.

Glycosylation changes are a universal feature of cancerous tumour progression, with the carbohydrate structures of cancer cells being distinct from those of normal cells. These changes can take a variety of forms, including incomplete or excessive expression of certain carbohydrates, as well as the appearance of novel structures. Unlike proteins, which are generally encoded by a single gene, the expression of glycans is controlled by several related genes concerned with carbohydrate synthesis and metabolism. Aberrant expression of these genes, leading to altered expression of the carbohydrate enzymes, can result in the transformation of normal cells to cancer cells and lead to tumour invasion and migration. Iminosugars have been shown to inhibit these enzymes, offering a new therapeutic strategy to stop the development of cancer and tumour metastasis.

A consequence of our greater understanding of the importance of glycobiology has been the identification of vast numbers of new carbohydrate-related drug targets across different therapeutic areas. If these opportunities are to be fully exploited, a collection of compounds is required that accurately mimics the ‘chemical space’ occupied by carbohydrates in both mammalian and microbial cells (see Box).

There has undoubtedly been a resurgence of interest in iminosugars as evidenced by the increasing number of articles appearing in the primary literature. In addition, the pharmaceutical and biotechnology industries are now showing greater interest in the area (Table 1). This includes Amicus Therapeutics and Actelion, both active in drugs for neurodegeneration and rare diseases; United Therapeutics, which develops anti-infectives; and UK-based Summit, which is pioneering the development of an iminosugar-based technology platform called Seglins (Box).

Such interest has created a unique opportunity for a serious in-depth investigation of the field and exciting discoveries are being made which will undoubtedly lead to new drug candidates.

Drug discovery is dominated by a remarkably small number of molecular scaffolds, with many areas of chemical space remaining relatively unexplored. Glycospace, the structural and functional diversity of carbohydrates contained within a cell, tissue or organism, is one such area that remains largely unexploited in the pursuit of new medicines. This is surprising when one considers the role that carbohydrates play in development and disease, and the structural diversity of this class of molecule, which is amenable to library design 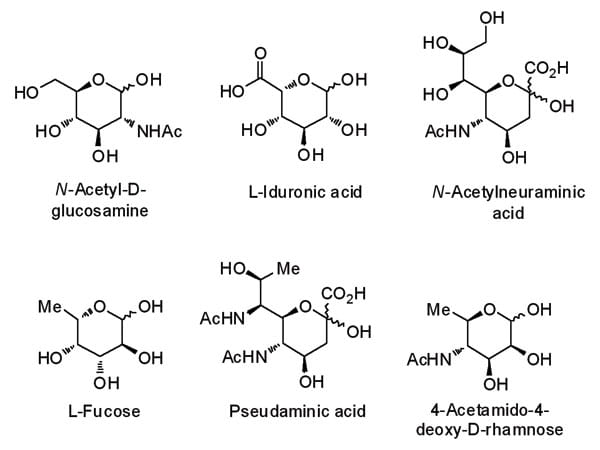 Exploiting this chemical space offers substantial opportunity in identifying new molecular scaffolds for developing therapies relating to the processing, sensing and recognition of carbohydrates. However, first we need to define glycospace. At the simplest level this can be done by analysing the constituent monosaccharides which make up the entire complement of carbohydrates of the cell, tissue or organism, whether free or present in more complex molecules. For example, if we take the hexose sugars such as glucose and galactose there are eight stereochemistries that may be defined in one of two configurations (D-/L-enantiomers), leading to a total of 16 monosaccharide scaffolds. With each additional stereogenic carbon, the number of possible monosaccharides increases two-fold so that the number of scaffolds under 10-carbons is > 500 structures.

However, carbohydrate recognition is not limited to the interactions of the hydroxyl group. Substitution and modification of the ring with amides, amines and acids, as well as sites of deoxygenation and branching, are all important in defining carbohydrate function and purpose in nature. This leads to additional levels of structural complexity and an increased number of monosaccharides that may occupy glycospace.

Conventional non-carbohydrate screening collections have failed to reflect this natural diversity and consequently have had limited success in identifying carbohydrate-related drug-targets. A key challenge facing researchers is how the structural and functional diversity of glycospace can be best transcribed onto an accessible and stable molecular scaffold. Carbohydrates can rarely be employed for this purpose, owing to their metabolic instability and rapid degradation in vivo. One approach to a more comprehensive mapping of glycospace is to use carbohydrate mimetics, such as iminosugars, as the building blocks. Iminosugars are recognised by, and interact with, carbohydrate receptors and handling systems, but unlike carbohydrates are not processed by these pathways. In order to attain comprehensive coverage of glycospace and represent the full repertoire of diversity found in mammals and microbes, a defined and diverse collection of iminosugars is required.

One strategy being developed for this purpose is Seglin technology – second generation leads from iminosugars – by pharmaceutical company Summit. This iminosugar platform is achieved by taking the main monosaccharide classes, the hexoses and pentoses, as starting points from which a refined series of target structures is drawn. The relative stereochemistries of the four pentose and eight hexose sugars are reflected across four monocyclic templates, allowing for comprehensive coverage of configuration, stereochemistry and ring size.

These base templates provide the foundations of the screening platform from which a more diverse collection is built. Modification to represent the additional functionality found in nature is achieved through site specific incorporation of key functional groups and substitutions, and provides a unique screening portfolio that comprehensively covers the diversity of mammalian and microbial glycospace.