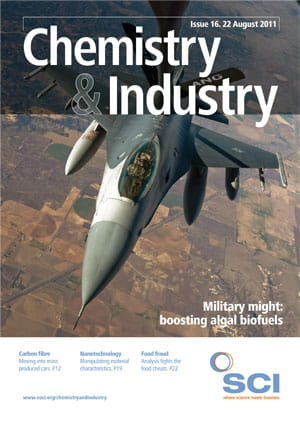 The spectrum of ‘food fraud’ ranges from the comical to the sinister. For every ham-fisted conman selling battery farm eggs as ‘free range’, there are people dying after eating food adulterated with engine oil, melamine and known carcinogens.

Limited time and resources mean that not everything can be analysed in a laboratory – but not everything needs to be. ‘Experienced trading standards officers know what to look for,’ says Hines. He cites a recent case, in which cheap red wine was being sold as Australian Chardonnay. Trading standards officers became suspicious when they saw a number of mistakes on the label – including the word ‘Australia’ being misspelt. ‘This was simply low-quality wine being passed off as something else,’ says Hines. ‘There were no implications for food safety, but it was damaging for the brand.’

Cases like this are usually part of a far larger problem, which is why the UK Trading Standards Institute only releases limited details of the fraud – and does not detail every single mistake found on the label, for example. ‘If this counterfeit Chardonnay appears again, you can guarantee that the word ‘Australia’ will be spelt correctly,’ explains Hines.

Many cases of food fraud, like this one, says Hines, are quite comical. One importer in Norfolk decided to buy 17t of cheap honey from South America and sell it as locally-made produce. Local trading standards officers investigated when local beekeepers wondered where all this ‘local’ honey was coming from.

But there is also a dangerous and sinister side to food fraud. In 2005, for example, adulterated chilli powder led to the UK’s largest food recall to date.

The price of chilli powder depends on its colour – the darker the better. But chillies are subject to natural colour variation. So, to overcome a natural ‘lightness’ – perhaps by chillies being grown at slightly cooler temperatures – some importers had added an illegal textile dye, Sudan-1, a known carcinogen, to the chilli powder.

And while the amounts ingested are likely to have been very small, it still led to a huge product recall. ‘The law says that we don’t use known carcinogens in food products,’ says Hines.

The case of melamine in milk powder is perhaps more sinister because the chemical was actually added to fool testing authorities. When milk is received from the dairy, its protein content is analysed to check that it has not been watered down. ‘Somebody realised that if you add melamine to watered-down milk, you can artificially push up the protein content,’ says Hines. ‘It takes a chemist or a food technologist to do this – somebody educated to university level.’ Melamine causes death by collecting in the kidneys. An estimated 60 babies died in China after ingesting infant formula adulterated with melamine.

Hines believes that major incidents like these help to boost enforcement. Recently, five Lithuanians died in an explosion at an illegal vodka distillery in Lincolnshire. ‘The incident has opened the country’s eyes,’ he says. ‘I know that authorities are now taking a far greater interest in counterfeit vodka sales.’

But no matter how diligent the inspectors are, they need to gather irrefutable proof of fraudulent activity. This is where laboratory testing – particularly DNA analysis – can help to uncover some of the most sophisticated fraud.

Jann Martinsohn of the Joint Research Centre (JRC) in Italy co-ordinates a pan-European project that helps to fight fraud in the fisheries industry, which is estimated to be more than €10bn. One type of fish – usually a cheap one – is passed off as another – usually an expensive one.

‘There are three basic issues,’ explains Martinsohn. ‘We would like to know where fish products come from, what species they are, and whether they are ‘wild‘ or ‘farmed’. It’s good for us that DNA is a natural tagging system.’ DNA testing, he says, is prevalent. ‘It’s feasible even for ‘non-experts’ to take a tissue sample and send it to a laboratory, which can then use specific “markers” to see what species it really is,’ he says.

The FishTrace project, in which Martinsohn is involved, attempts to characterise the leading types of fish stocks in Europe and produce a ‘reference sample’ of each one. Any time a suspicious sample is found, it can be checked against the ‘original’. ‘FishTrace is a public database that stores reference sequences,’ he says. ‘We have sampled different European fish and found specific DNA sequences for each one.’

The project has collected and analysed samples of the main commercial fish, including cod, hake, sole and red mullet, and produced a DNA reference sample for each one. These are used to characterise around 200 fish species that are fished commercially in Europe. The project analysed the cytochrome b DNA sequence and found specific sequences for each species. This provides the unique ‘fingerprint’ against which samples are analysed.

This kind of ‘DNA profiling’ was used to prosecute a fisherman operating out of Liverpool, UK. Inspectors swooped on his boat and found 270kg of fish fillets, which he claimed were French Sole, which he was licensed to fish. DNA testing proved that the catch was Common Sole, which is more expensive, and subject to fishing quotas. The fisherman was prosecuted and fined €15,000.

A similar project, FishPopTrace helps to identify where a fish has come from. Certain fish species are more valuable than others; the same is true of fish from certain regions. For example, cod from the Baltic Sea is more expensive than cod from the North Sea. ‘We collected samples and found genetic differences between fish from different regions,’ says Martinsohn. ‘We’ve created a reference baseline for cod, herring, hake and sole.’

Another ingenious way to determine where a fish has been caught is to analyse its tissues for trace elements, such as strontium, barium, iron or lead. ‘Because trace elements are taken up from the surrounding waters, the chemical composition of hard tissues, such as otoliths and scales, reflect physical and chemical properties of the environment to which the fish have been exposed,’ says Martinsohn. ‘The specific characteristics of fish otoliths make them highly suitable for the identification and analysis of geochemical signatures.’

But the work that Martinsohn and others have done on FishPopTrace is dwarfed by a larger initiative – the Barcoding of Life project – in which more than 68,000 species have been genetically analysed. The sub-project focusing on marine species, FishBOL, has ‘barcoded’ around 8300 fish species. These genetic fingerprints are already being used to test fish samples.

While there is a growing database of reference samples, Martinsohn says that many countries, and laboratories, use their own methods. ‘I‘d like to see countries in the EU taking a more homogenous approach to testing,’ he says. Unfortunately, he says, despite the falling cost of genetic testing, there is still a perception that it is too expensive. ‘However, it has a high deterrent effect,’ he adds. ‘Many people, when faced with genetic evidence, admit what they’ve done to avoid going to court. There may be a higher science cost with genetic testing, but it reduces legal costs.’

DNA testing has become a key skill for many analytical laboratories, and is one that the food industry is taking advantage of far more frequently. Just about everything that turns up on our plates – be it rice, cheese, meat or vegetables – can be characterised by its DNA.

Take Basmati rice, for example, which attracts a lower import duty than standard rice. Unscrupulous sellers may try to pass off normal rice as Basmati. DNA analysis can help to differentiate between the two. ‘We look for genetic markers called “microsatellites”,’ says Barbara Wimmer, account sales manager for food analysis at international testing laboratory Eurofins. ‘Each rice variety has its own fingerprint.’ Fragrant rice varieties, such as Basmati or Thai Jasmine, are only fragrant because of a genetic defect for a particular enzyme.

Wimmer says that many foods are based on particular breeds or types of animal, and only DNA analysis can determine their authenticity. Pecorino cheese, for example, should be made from sheep’s milk, and buffalo mozzarella from buffalo’s milk. Any evidence of cow’s DNA – and therefore cow’s milk – means that the supplier has cheated on the ingredients.

‘We test virtually everything that contains DNA,’ she says. ‘Cheese, meat, ready meals, vegetables, herbs and medical plants like Ginseng. We also can test if a product is vegan.’

For some meat products – such as ham – it is an important quality characteristic if the ham is produced from one animal or whether it is ‘composite meat’ from two or more animals. That can also be tested for.

‘We also do gender testing for meat,’ she says. ‘Meat from boars is considered to be low quality, compared with meat from sows. With beef, it is the other way round: meat from bulls is higher priced, and usually of better quality. Basically there is an endless list.’

Food fraud is not confined to the developed world. One of the most infamous cases is that of children in Nigeria, who were poisoned by teething syrup that contained engine coolant. While genetic testing would not have helped here, there are potential cases where it could be useful – but is not necessarily available.

‘Food analysis laboratories may not have access to DNA testing – but many labs in hospitals are used to analysing human tissue,’ says JRC’s Jann Martinsohn. ‘They could analyse fish DNA if they had spare capacity. DNA sequencing is DNA sequencing.’ The same principle – of using ‘spare capacity’ in DNA analysis – could also be applied to Europe.

So it’s not just murderers who get caught by DNA testing – it can help catch up with food cheats as well.

Lou Reade is a freelance science writer based in Kent, UK