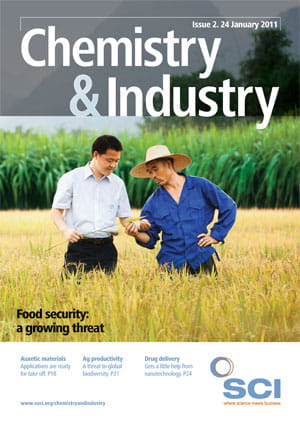 When we swallow a tablet, the drug molecules have to find their active site in the body, but if they act on the wrong tissue as well as the correct one, side-effects can result. Other molecules can’t be dosed orally as they are cleared before they reach their target. One way to overcome these problems is to encapsulate the drug molecule in a nanoparticle. Numerous companies are now working on nanoparticles with targeting ligands that direct them to the right place, greatly increasing their chances of success.

One marketed drug formulated as nanosized particles, Doxil, contains doxorubicin, whose characteristics are altered by encapsulation within liposomes coated with polyethylene glycol. It was developed by Sequus Pharmaceuticals in the 1990s and the company’s president and chief operating officer at that time was Scott Minick, who is now chief executive of a company working on very different nanoparticles, Bind Biosciences, based in Cambridge, Massachusetts, US, a spin-out of Bob Langer’s group at Massachusetts Institute of Technology (MIT).

‘Doxorubicin has been used for years in about a dozen tumour types,’ Minick says. ‘Doxil was developed to improve the effectiveness and side-effect profile. It was also active in tumours where doxorubicin itself was ineffective, such as Kaposi’s sarcoma and ovarian cancer, as it improved delivery to the tumour itself. Doxil was an early demonstration of how a nanoparticle can fundamentally improve the therapeutic profile of a drug. We believe the more sophisticated, targeted nanoparticle technologies Bind is working on will improve a drug’s therapeutic benefits even further.’

If a nanoparticle is to be delivered systemically, then it’s vital the particle is the right size and itssurface characteristics allow it to spread through the circulatory system in a sensible timescale, while avoiding being cleared by macrophages or the liver. It also needs to go to diseased tissues and not accumulate in the wrong place. The Bind nanoparticles are also designed to slowly release the drug once they reach the target site. 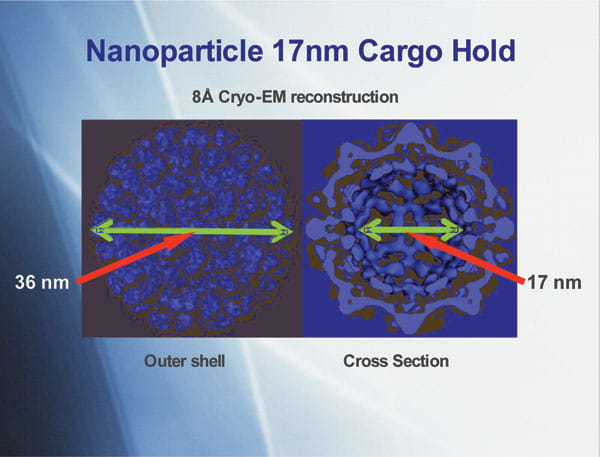 ‘We started with some biocompatible and biodegradable old friends – polylactic acid and polyethylene glycol – and the nanoparticles are comprised of PLA–PEG copolymers,’ says Jeff Hrkach, senior vice-president of pharmaceutical science. ‘There is already a lot of expertise in encapsulating drugs and engineering particles using these materials, and they are tried and tested, both clinically and commercially in other applications, so they should be safe. The degradable polyester PLA creates the main matrix of the particle in which we encapsulate our drug molecules. The PEG orients itself to the surface by virtue of our manufacturing process, and creates a “stealthy” layer that allows long circulation times for the particles by limiting immune clearance. We also have proprietary methods to dress the surface with targeting ligands.’

These ligands enable the nanoparticles to be directed to the active disease sites by targeting some form of receptor that is upregulated at the target site. ‘We are able to get the ligands onto the polymer and orient them on the surface so that the optimum amount is present, which is a real challenge in terms of scale-up and chemical development,’ Hrkach says. ‘It’s a very delicate balance – enough ligands to target the site, but not so many that it affects its stealthiness. Often, people overload the surface with ligands, so they are cleared by macrophages.’

The company’s lead product, BIND-014, is a nanoparticle formulation of the anticancer agent docetaxel. It has successfully completed preclinical studies and Minick anticipates human clinical trials will start soon. ‘We want to take proven molecules like this and improve them, creating best-inclass compounds with significantly enhanced benefits, not just marginal improvements. We are also working with several pharmaceutical companies,which think our technology could help with their new chemical entities (NCEs) and we are co-developing these molecules with them.’

The team has thus far worked with about 20 different active drug molecules, and by varying the molecular weight of the polymers or the ratio of the polymer mixture they can control the drug loading level and its release profile, which has an important impact on pharmacokinetics and the ability to achieve higher concentrations of the drug at the target site.

‘As well as cancer, we are also working across several different therapeutic areas where disruption in the vasculature is an issue, including inflammation and cardiovascular disease,’ Hrkach says. ‘For example, in inflammatory diseases such as rheumatoid arthritis, there is both swelling and a lot of upregulation of various receptors. We believe that where there is a combination of leakiness in the vasculature and highly upregulated receptors, the particles have potential. Another area where we have compelling preclinical data is cardiovascular disease. We believe we can deliver targeted nanoparticles systemically to areas where drug-eluting stents might normally be used – or even in peripheral arterial disease where it’s very hard to stent.’

A rather different way of creating nanoparticles is being pursued in the US by University of North Carolina spin-out NanoVector. ‘We’re hitching a ride on nature’s nanoparticles – viruses,’ explains president and cso Bruce Oberhardt. ‘We’re using red clover necrotic mosaic virus, which infects plants, and is extremely common in temperate regions. It infects cherry trees, for example, and when you eat cherries, you also eat the virus. It is harmless, and in some places it’s even in the municipal water supply. It’s also very robust – most viruses don’t last long outside the host as they disintegrate; this virus can live in the soil for months.’

What makes the virus a great candidate for a drug-carrying nanoparticle is a very unusual property – if there are low concentrations of calcium and magnesium ions, 60 holes about 11–13nm across open up in the capsid, which is the protein shell that surrounds the virus’s RNA. ‘These holes go all the way into the interior, and if you add drug molecules, they will enter the capsid through these holes,’ Oberhardt explains. ‘If you then add calcium ions, the holes close, and don’t reopen until the calcium concentration drops. If injected into the bloodstream, the holes remain closed, but inside a cell where the calcium concentration is low, they reopen and allow the drug to diffuse out again.’

The way the virus opens and closes is ingenious, explains Stefan Franzen, one of the company’s scientific founders. ‘The capsid consists of 180 proteins packed together in an icosahedron, which is nearly spherical,’ he says. ‘At the interface between each protein, there is a binding site for calcium and when the calcium is removed, the proteins rotate like a camera iris, opening the pores. The RNA inside the virus provides pivot points for the proteins to rotate and open, allowing us to infuse drug molecules inside, then add calcium to lock it again with the cargo inside.’ This gives drug-carrying nanoparticles, about 36nm in diameter.

Targeting molecules are added to the surface to direct the particles to the active site. ‘We use peptide molecules that target a receptor found in advanced cancers, the cancer cells take the virus up, and once inside the drug is released,’ Oberhardt says. ‘We are fairly confident we will see fewer side effects with this technology than with the free drug. Also, it doesn’t just target the solid tumour, but any cancer cells that may exist elsewhere in metastatic cancer.’

The virus’s RNA remains within the capsid, and while Franzen admits there could be concerns about this, they are pretty certain it will cause no problems. ‘All the evidence suggests the viral RNA will be unable to do anything within a mammalian cell,’ he says. ‘We have tried to detect the RNA in these cells, and we can’t find it. The replication process is highly specific to the components of a plant cell, and thus it cannot replicate at all within a mammalian cell.’

They have loaded the virus with high levels of doxorubicin, and Oberhardt says there is no evidence of the toxicity one might expect. ‘We can give a mouse many times the maximum tolerated dose of doxorubicin and the mouse is fine,’ he says. ‘However, we do see tumour targeting and tumour growth inhibition. We have also made doxorubicin target cancers it normally has no effect in because resistance has developed. By putting 1000 doxorubicin molecules inside a viral nanoparticle, the efflux transporters that cause multi-drug resistance can do nothing about it as the particle goes deep inside the cell before it releases the drug close to its site of action.’ Human clinical trials, given sufficient resources, are maybe two years away.

Dave Evans at the John Innes Centre in Norwich, UK, is also working on viruses for nanoparticle drug delivery, but his cowpea mosaic virus capsids contain no viral genetic material. ‘My colleague George Lomonossoff has developed a route whereby empty viruslike particles can be grown in plants,’ he says. ‘With no RNA inside, they are empty protein cell capsules.’

The particles are, essentially, made by taking the precursors of the protein capsid together with a protease and introducing agrobacterium bacteria. This is used to infect the plants, and the plant’s cellular machinery creates empty viruslike capsids, with no viral RNA. ‘These virus-like particles are not themselves infectious, so they cannot be used to infect further plants,’ he says. ‘But this is what we want, as we don’t want to make infectious material. There is resistance to introducing any non-human genetic material into medicine, so by getting rid of the viral RNA, it’s just a fancy protein that can be used to carry materials. At first, we made wild-type virus containing RNA and tried to remove the RNA. But you’re never certain you’ve got it all out and the yields were much lower than the method we have now developed.’

The group is now starting to investigate incorporating drug molecules, such as the anticancer agents doxorubicin and cisplatin, into the biocompatible nanoparticles, which are about 30nm in diameter. ‘There are pores in certain parts of the protein shell through which we can diffuse things in and out of the capsid,’ he says. He is also filling them with iron oxide nanoparticles to enable the magnetic hyperthermic treatment of cancer. These are formed directly inside the capsid via a reaction between chemicals that are diffused in.

‘We’re also looking at how we can have control over the release of material when it reaches the targeted site, which will be important for delivery,’ Evans says. ‘It may happen naturally as the virus is taken up in the cell, but we are also trying to design a gating mechanism that would open and close the pores to release the drug at the site in a controlled way.’ With iron oxide, it is better if it remains held within the virus, as an external radiofrequency is used to cause localised heating at the cancer cells.

The idea is still in the proof-of-principle stage, so the amounts that have been made remain small. ‘We can get half a gram of viruslike particles from a kilogram of infected leaf materials,’ he says. ‘But there is potential for scale-up, if we find it’s appropriate as a drug delivery agent.’

The next step is to genetically or chemically modify the capsid surface with targeting agent for specific cancer cell lines. ‘We can then determine in vitro whether they can indeed be used to deliver drugs to the cells and, if successful, test their efficacy with a range of different pharmaceutical agents in comparison with other delivery methods,’ he says.

Sarah Houlton is a freelance writer based in London, UK.