The chemical and downstream industries are facing unseen pressures to adopt renewable feedstocks and production methods that minimise both economic and environmental impacts. Currently, up to 15% of global petroleum consumption – and resulting end-of-life carbon emissions – is attributable to the production of chemicals. Volatility in petroleum supplies and pricing is driving the relocation of the petrochemical industry out of the once dominant US market to the Middle East, where raw material supply is abundant or to Asia where there is rapid market growth. Development of hard-to-reach petroleum sources exposes fragile environments and sensitive communities around the world to catastrophic damage. 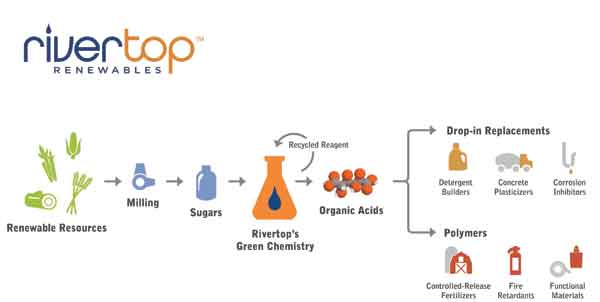 But just as complex challenges arise, so do answers. Glucaric acid is a member of a larger group of compounds known as sugar acids – and more specifically, aldaric acids. Glucaric acid has garnered attention because it was identified as one of the top 12 renewable building block chemicals by a 2004 US Department of Energy (DoE) report: Top value added chemicals from biomass. It can be prepared in one step from abundant and inexpensive glucose and has numerous potential applications, both as a building block chemical and in direct end uses.

The unique molecular structure of glucaric acid – a carbohydrate diacid (Figure 1) – provides for a range of technical applications that require varying levels of solubility, biodegradability, and safe dispersal in the environment. While the DoE report highlights the potential of glucaric acid to help address environmental and economic concerns with current chemicals, however, the chemical has not yet been used widely because of the difficulty of commercial scale production.

At Rivertop Renewables in Montana, US, researchers believe that they have now overcome that problem with the development of a low cost production process for glucaric acid that is suitable for large-scale development. Rivertop is one of a number of companies developing alternatives to chemicals made from petroleum – oil and gas – and mining, such as phosphates, offering solutions to economic and environmental challenges facing chemical consumers and governments.

Over the long-term, the company’s proprietary carbohydrate oxidation technology will be used to produce a wide variety of organic acid platforms. However, the initial focus is on the manufacture and formulation of glucaric acid for use in a variety of markets seeking economical, bio-based solutions. While Rivertop is focusing its efforts on converting glucose into glucaric acid, our oxidation process is suitable for other sugar feedstocks, such as xylose or arabinose, which will become more important in the future as biomass refining techniques improve.

The initial application for Rivertop’s glucaric acid is as a ’detergent builder’. One of the primary jobs of builders is to sequester and suspend calcium and magnesium ions, thus preventing the formation of hard water deposits. Builders also help to remove stains. By softening the water, builders prevent the formation of bonds between soil molecules and the fabric or dish, which would otherwise cause the soil to cling to the surface of the item being washed.

Currently, over 4.5m t/year of phosphates are sold worldwide for this application, mainly as sodium tripolyphosphate (STPP). Phosphates are used heavily throughout industrial and consumer markets, particularly for detergents and water treatment. However, detergents are the third-greatest source of phosphate pollution after agriculture and sewage.

When phosphates concentrate in surface water they spur unsustainable plant growth. The decay of excess plant material starves the water of oxygen. As a result, they are increasingly regulated to protect clean water. Phosphates are being phased out of Western consumer markets due to their damaging eutrophic effects.

In response to severe restrictions of phosphorus content in automatic dishwashing detergent by over a dozen US states, the industry has effectively eliminated the use of phosphates in this growing market segment, beginning July 2010.

In November 2010, the European Commission proposed a ban on phosphates in laundry detergent, something effectively enacted in the US and Japan in the 1980s. However, the Commission stopped short of proposing a phosphate ban in automatic dishwashing detergent because ’more research and innovation is still needed to develop adequate alternatives’. Several European countries have already placed their own regulations on phosphate use in detergents.

Phosphates are also losing support in China, with their share of the detergents market plummeting from around 80% to 50%. With the heavy reliance on phosphates in transition, detergent formulators have increasingly turned to citric acid, citrates and other builders, including zeolites, silicates and carbonates. Over 340,000t of citric acid is used annually in detergents while zeolites consumption is over 900,000t annually. However, none of these builders perform as effectively across detergent applications as do phosphates, frustrating consumers and spurring manufacturers to seek better solutions. Other sequestrating alternatives in the market, such as nitrilo triacetic acid (NTA) and ethylene diamine tetraacetic acid (EDTA), have not filled the market gap because of related environmental problems and regulatory restrictions.

Formulations based on glucaric acid offer a high performance, cost-competitive alternative. In addition, Rivertop has also qualified glucaric acid as a corrosion inhibitor that can be applied to road de-icers and cooling towers. Internal tests show effective performance in cooling towers, a very large market for phosphates and other chemicals. The US Geological Survey estimates that half of fresh water consumed in the US is used to cool power plants. This function is an important component of chemical and other manufacturing facilities as well as large institutions, such as universities and hospitals. Growing concerns for water security necessitate increased conservation. By introducing a biodegradable corrosion inhibitor into the cooling tower market, plant operators will be able to contain infrastructure costs and limit permitting requirements for phosphorus discharge into water treatment facilities. Glucaric acid has also proven to be effective in reducing the corrosive effects of road de-icers and Rivertop has pre-qualified glucaric acid for sale in this market by meeting standards set by the Pacific Northwest Snowfighters Association.

Rivertop has also qualified glucaric acid as a concrete admixture, an application that is likely extendable into the gypsum wallboard market. The chemical meets ASTM standard 494 for set retardancy and water reduction. Both functions save labour and water reducers strengthen and conserve concrete by allowing for dense concrete that remains workable, despite the reduction in water content.

Other uses for glucaric acid include health supplements, cosmetic ingredients, and starting materials for building value-added chemicals. On the nutraceutical front, there has been a long interest in using glucaric acid and derivatives to help prevent cancer and lower cholesterol.

Rivertop will not only tap into current markets ready for economic and environmentally-friendly solutions, but also create bio-based applications and products that are not yet known or used. Polymers built from glucaric acid, for example, are likely sources of these undiscovered applications. A diacid, glucaric acid can serve as a monomer in the preparation of a variety of polymers now under development.

For over 100 years, chemists have known how to make glucaric acid from glucose using nitric acid as the oxidising agent. In recent years, other oxidation methods for preparing glucaric acid have been developed, however, nitric acid remains superior with respect to versatility, reaction efficiency – both time and energy – and raw material cost. Still, a conventional nitric acid oxidation of glucose results in numerous byproducts including undesirable waste compounds from glucose and harmful NOx gases, which must be treated before being released into the environment. As a result, the conventional method has not been scaled to large industrial volumes.

Rivertop has transformed the conventional nitric acid oxidation into essentially a catalytic process, which reduces nitric acid consumption; minimises the production of undesirable waste products including NOx; and increases the yield of high performance product as well as enabling inexpensive regeneration and recycling of nitric acid. These refinements transform the nitric acid oxidation not only into an environmentally friendly process, but also an economically advantageous one.

Traditional oxidation routes to produce glucaric acid from glucose are prohibitively expensive and yield ~60% usable product. The new process utilises virtually all of the resulting product. Our catalytic process also uses nitric acid oxidation but recycles up to 95% of it and results in virtually no waste. It is also feedstock flexible, as it can use any source of plant grain or starch as a source of glucose.

Rivertop anticipates building a 45t semiworks facility by the end of 2011 for pilot production and testing of our glucaric acid-based formulations, but also expects to have product available with which to enter markets as early as the third quarter of 2011. A world-scale manufacturing plant for glucaric acid will follow, projected at 27,000t capacity.

The first glucaric acid production-scale plant should cost roughly $20-30m, which is considerably cheaper than the $50-100m investment need for most other renewable plants.

Our new oxidation process also offers versatility as a platform process for producing value added products from renewable, agricultural feedstocks. With a single process, and all the advantages associated with it, Rivertop can utilise a variety of sugars to produce differentiated chemicals. While similar in structure, the products from different sugars offer unique properties that will enable the company to fine tune performance in different applications as well as opening up entirely new uses.

As technology progresses for separating sugars from biomass, Rivertop will be able to easily and rapidly integrate new cellulosic carbohydrate feedstocks into existing infrastructure.

Events such as 9/11, and more recently the Gulf of Mexico-BP oil spill, continue to demonstrate the economic, environmental and even security impacts of our society’s reliance on petroleum based products. Tied to these events is a growing consumer awareness of the impacts of the chemicals that make up the products we use, as well as the associated environmental and economic impacts. All of which means that renewable, biobased chemicals appear to have a bright future. In this case, glucaric acid has the near, mid, and long term potential to address multiple billion dollar markets, such as detergents, corrosion inhibition, concrete admixtures, and various polymers with several potential applications.

Today’s renewable chemical industry draws comparisons with the now robust steel industry. In the mid-1800s, steel was very expensive to produce, with only small quantities made for tools or weapons. While its strength and durability made steel attractive to industry, technology had not advanced to allow for affordable, efficient mass production.

In 1856, English engineer Henry Bessemer changed the economics and the impact of steelmaking with his ’open hearth‘ process. Bessemer’s process drastically reduced the price of steel, allowing cheap steel to be widely used in the US and Europe for expanding railways and ships – helping to fuel the industrial revolution.

Today's renewable chemicals, such as glucaric acid, may be poised to bring about a similar sea change of technology, by ushering in new cost-efficient, versatile technology platforms to transform the chemical industry.

James Stoppert is ceo of technology company Rivertop Renewables, based in Montana, US.