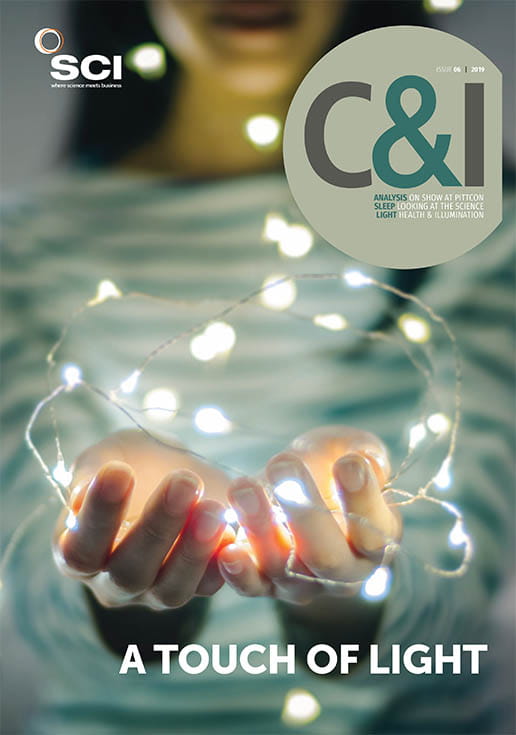 LED lights are gaining market share, while chemists continue to develop new materials to tweak their performance in the search for the perfect white light. Michael Gross reports.

Edison’s classic light bulb, patented 140 years ago, famously produces 50 times more heat than light. Which is why, after a century-long success story, it is now on the way out. Energy-saving compact fluorescent lamps (CFLs), which became available in the 1980s, have improved efficiency by a factor of five, but create their own environmental hazards due to the use of mercury vapour in their fluorescent tubes.

We may be luckier with the third-time invention of the light bulb, in the shape of LED lights, which, after a long journey through chemistry and physics, are now approaching a state close to perfection.
Blue lights

The use of light-emitting diodes (LEDs) in general lighting only became possible after the invention of blue LEDs, a quarter of a century ago, completed the colour mixing scheme. Shuji Nakamura, of Nichia Chemicals at Tokushima, Japan, produced the first high performance blue LED in 1994, based on InGaN materials. He received the Nobel Prize in physics in 2014, together with Isamu Akasaki and Hiroshi Amano who, in separate work at the University of Nagoya, had made important discoveries concerning the mechanisms required for producing GaN semiconductors for use in blue LEDs.

Complementing the LEDs available for the red end of the visible spectrum, blue LEDs made it possible to produce white light by combining LEDs of different colours. White light LEDs made in this way are even more energy efficient than CFLs, using less than 10% of the electricity that an incandescent bulb with the same light output would need.

However, having to combine LEDs of different colours has some drawbacks in practice. Green and orange emitting LEDs are less efficient than red and blue ones, and they may change in different ways in response to environmental conditions and to equipment ageing.

Therefore, researchers started to develop ways of producing white light using only blue LEDs, with the help of a luminescent material – phosphor – known as YAG:Ce (Y3Al5O12:Ce), which converts part of the light to a wavelength that, together with the remaining blue light, creates the impression of white light. Many other phosphors producing better approximations to the spectral distribution of white light have also since been developed.

The developers have often faced a trade-off between good coverage of the visible spectrum and energy efficiency. Phosphors that worked well in creating a broad component of red light similar to that of natural sunlight had the tendency to emit part of their radiation in the infrared. If efficiency is calculated based on the visible part of the spectrum alone, that leakage into infrared counts as wasted energy, so some LED products that perform better in terms of the colour spectrum have a poorer energy efficiency.

In 2014, however, the group of Wolfgang Schnick, at the Ludwig Maximilian University (LMU) Munich, made significant progress when they discovered that a nitridoaluminate material they were studying had promising qualities as a phosphor. Specifically, in the europium-doped strontium nitride-lithoaluminate Sr[LiAl3N4]:Eu2+ (SLA), the europium emitted in a sufficiently narrow band of red to produce good natural colour without major losses in the infrared.1

The company Lumiled has since commercialised this phosphor and uses it in several product lines, including the so-called chip-on-board (COB) products trade named Luxeon – a new type of LED packaging where multiple diode chips are arranged as closely as possible on a plane giving the impression of a lighting panel rather than separate lights. They are made for a wide range of applications, including high bay, downlights, spotlights and streetlights.

Still, researchers hope to further improve LEDs by shifting the red emission slightly to shorter wavelengths, in order to have both the natural-looking light and the optimal energy saving. Schnick’s group has tried to replace the strontium in SLA with the heavier homologue barium, but the synthesis has not succeeded yet. However, replacing half the strontium atoms with barium and the other half with calcium led to a new material with a double emission peak at 638nm and 790nm, producing red and infrared light, respectively.2

This is due to the europium dopant behaving differently depending on whether it replaces a barium or a calcium atom in the crystal lattice. The researchers found that at very low dopant concentrations, they can suppress the infrared emission entirely, leading to the narrowest emission band thus far observed in a europium-doped material.

Further avenues remain to be tested. For instance, Schnick and colleagues mention that replacing the calcium with magnesium may help to confine the europium dopant to the barium sites and thus to achieve the target of pure red emission without any spill-over into the infrared.

Meanwhile, the groups of Joanna McKittrick and Shyue Ping Ong, at the University of California, San Diego, working with Wong Bin Im, at National University in South Korea, have also identified a promising new phosphor, Sr2LiAlO4. They used a systematic, high-throughput computational approach developed in Ong’s lab to explore as yet uncharted chemical space, namely the possible combinations of the elements strontium, lithium, aluminium and oxygen. Although each of these elements occurs in known phosphors, a combination of the four had not been tested before. The calculations yielded a combination of these four elements predicted to make an efficient phosphor for LEDs.3 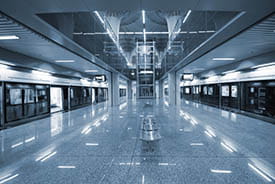 McKittrick’s team then came up with a way of producing the new compound in the lab and confirmed that it had the predicted qualities. Won Bin Im’s team in South Korea optimised the procedure for industrial application and built prototype LED lights to demonstrate its performance. They found that the new phosphor has a colour rendering index (CRI) above 90, which is at the high end of the range currently available commercially. Natural sunlight and incandescent bulbs have a CRI of 100, so one can read these measures as a percentage of perfection. Many commercial LED bulbs have a CRI in the 80s.

Thanks to the computational methods used, the whole development process only took a few months. ‘Calculations are quick, scalable and cheap. Using computers, we can rapidly screen thousands of materials and predict candidates for new materials that have not yet been discovered,’ Ong said. However, the material isn’t quite perfect yet. ‘We have achieved excellent colour quality. Now we are working on optimising the material to improve quantum efficiency,’ Ong said.

As researchers are coming closer to developing energy-saving lights mimicking the light our eyes evolved for, there remains room for diversification and adaptation to the requirements of different environments. Thus, a retail business may want lights that encourage people to linger and look at the exhibited ware favourably, whereas the light in an operating theatre has the vital task of revealing subtle details to the operating surgeon.

Companies like Selectronic, based in Witney, near Oxford, UK, specialise on building lighting solutions around the latest LED chips and phosphors. Working with partner company Honglitronic in Guangzhou, China, which produces the LED chips, Selectronic builds the electronics around the chip to ensure a smooth current and good disposal of excess heat. Although LED lighting produces a lot less waste heat than Edison’s light bulb, the small scale and sensitive nature of the electronics means that the dispersal of that heat is still an important consideration. As Selectronic technical manager, Xuesong Hu emphasises, these support structures enable the end users to get a long lifetime of up to 50,000 hours out of the lights.

Selectronic works for large customers like retail chains helping them to design a uniform lighting solution for their premises. Automotive lighting is another important field where the company tailors the lighting to the requirement of the environment.

Its latest product is a light that comes as close as possible to natural sunlight. ‘The option to create lighting products that replicate daylight opens a new era of what can be achieved in previously closed-off rooms or underground environments, not to forget the health benefits in dark winter periods from creating artificial daylight, particularly when linked with a time clock, to accurately reflect the various times of a bright sunny day,’ says Selectronic managing director Kevin Dry.

‘The Sunlight Spectrum 2835, which produces perfect colour, measuring more than 95 in the range R1 to R15 and continuous saturation, is very close to the actual sunlight spectrum. There is much less blue light and it is a first choice for protecting our eyes.’

While Honglitronic keeps the chemical composition of its phosphors secret, the main difference to other commercial options is that the primary light produced by the LED is violet rather than blue. ‘This LED uses violet light to induce RGB [red, green and blue] lights,’ Xuesong Hu explains. ‘There are three types of phosphors inside this white LED. All the RGB lights come from these different types of phosphors. As a result, Honglitronic’s LEDs produce a spectrum closer to that of sunlight without a “blue light peak”’.

Even a given environment or a given person may require different qualities of light at different times of the day, and on different days in the year. This is again in line with our experience of nature, where the light changes in daily and seasonal cycles, to which our physiology responds. One of the lighting trends identified in a recent report from the German lighting company Osram, which celebrates its centenary in 2019, reflects this under the headline of ‘human centric lighting’. LED lighting can be programmed to follow the requirements of the human circadian rhythm or biological clock.

A primary school in Denmark has already adopted a time-variable lighting scheme shaped to fit the circadian rhythm in a bid to improve students’ attention and avoid fatigue. A hotel chain has also developed a time-specific lighting scheme to improve sleep quality for its customers.

At the commercial end, an increasing number of companies are competing in the field of making and selling LED lighting. The trade website LEDinside reported recently that, due to the drop in price and profits, ‘restructuring business focus to concentrate on higher margin operation has been a trend the LED industry.’ Companies including Osram, GE, Cree and Eaton have sought to spin off their LED operations in some form.

However, there are many other things for which we need light. For instance, there is a growing demand for LEDs in the UV-C range, between 200 and 280 nm. This radiation can kill microbes by damaging their DNA. The traditional lamps used for this were mercury based. They will be banned under the Minamata Convention on Mercury from 2021. Sterilising drinking water in the home is one of the areas where a 2018 report released by LEDinside predicts a large growth in future LED applications.4

Other areas where there is still unexplored potential for LEDs include the lamps used for plants. Once a sufficiently versatile construction kit with LEDs and phosphors in various colours is at hand, there is no limit
to what people can do with such lights.