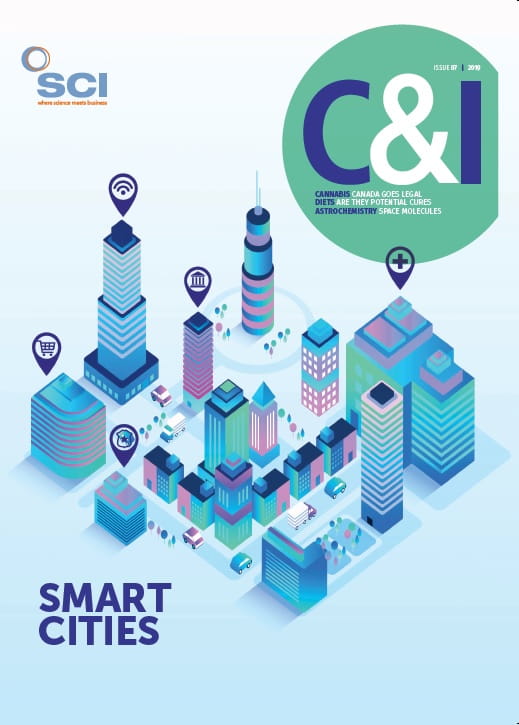 The world’s population is booming and more of us are living in cities. But could the future lie in smart sustainable cities that minimise their environmental impact with the help of computers, Richard Corfield reports.

In Isaac Asimov’s science fiction novel The Caves of Steel, much of indigenous humanity has sealed itself into giant steel-walled cities. The other section of human society – the Spacers – have gone on to colonise other planets and star systems. The cities of Earth each house millions of people and are supported by technological contrivances that provide power, transportation and home and office space. They also remove waste.

In the 21st century, such nightmarish imaginings are confined to the works of science fiction, but we still have a problem that our cities are not self-sustaining. They require an infrastructure of everything from agricultural production, power production, waste disposal and other amenities, for example, proximity of workplaces and green spaces for leisure.

A recent UN report highlights an unexpected problem;1 a city is not easily defined. A good example might be London. It is certainly not defined by its original administrative boundaries – ie within the city wall. It has a huge population that spills as far east as Tilbury docks and as far west as Reading, encompassing multiple local area authorities. Indeed, some have referred to London as the south-eastern conurbation, equivalent to the Metro Area of an American city. Therefore, the whole of southeast England can be thought of as a city, one that is expanding as green and brownfield sites are built over.

The definition of a sustainable city is even more slippery. According to a recent report by IDTechEx, a Cambridge, UK-based consulting company, a sustainable city is defined as a city where the totality of consumables, most especially energy, are produced within the city boundary – whatever that is.

Waste products from sewage to atmospheric carbon dioxide are recycled within a sustainable city and green spaces and an aesthetically attractive layout are also important requirements. In Asimov’s book, all city dwellers suffered from chronic agoraphobia.

In practice then, a sustainable city is a dwelling place usually occupying significant areas of land and which is home to a population of millions. For all practical purposes, a sustainable city lies somewhere on the spectrum between a net consumer of resources to one that produces what it consumes.

Put these two ideas together and you have a concept that has come, almost from nowhere, in the last 20 years – smart, sustainable cities or SSCs. So a smart, sustainable city is one that minimises its environmental impact and does so with the help of computers – which these days tends to mean Artificial Intelligence (AI).

According to the UN, for example, ‘a smart sustainable city is an innovative city that uses information and communication technologies (ICTs) and other means to improve quality of life, efficiency of urban operation and services, and competitiveness, while ensuring that it meets the needs of present and future generations with respect to economic, social, environmental as well as cultural aspects.’

There is no universal panacea that can turn a city into a smart, sustainable city. Instead it is being done by accretion of favourable technologies such as photovoltaic power generation, river-based turbines, tethered balloons, CCTV, vertical agriculture and waste disposal. Presently most city agencies operate within silos: little data is shared between them, and software systems are not interoperable,’ according to Steffen Sorrell of market intelligence firm Juniper Research. ‘Without a high level of information sharing between agencies, it is difficult to develop a forward-looking strategy that is beneficial to all parts.’ 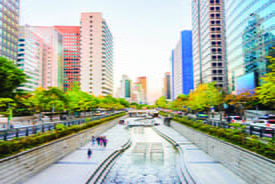 When it comes to cheap clean energy production, Max Aahman, senior lecturer in environmental and Earth systems studies at Lund University in Sweden, says the early 2000s were the cradle for what he terms the solar revolution. The emphasis now, on carbon capture and storage, is only possible because PVs are so efficient and so cheap. All experts on SSCs agree that a central plank of the concept will be the ability to generate sufficient electricity on an on-demand basis.

This is a paradigm shift from the model for electricity generation that has held ever since Edison invented the electric lightbulb. Here the emphasis was making sure that there was always power on demand, so that there was always a surplus. In today’s world, with its emphasis on cost and climate change, this is no longer an option.

There are a number of approaches to PV electricity generation, the most obvious being retrofitting PV solar panels on roofs and disused land to take some of the load off conventional electricity generation. An extension of this is Building Integrated Photovoltaic (BIPV) electric power systems, which not only produce electricity but are also part of the fabric of the building.3 PV cells are incorporated into the construction material and then connected to form an array. Sunlight then generates DC power, which can be rectified to AC. The electricity produced is then used to power the building or exported to the grid.

BIPVs come in two varieties, facade systems and roofing systems. Facade systems include curtain wall products, spandrel panels and glazings. Roofing systems include tiles, shingles, standing seam products and skylights. BIPV is frequently the optimal method of installing renewable energy systems in built-up areas. The US federal government is a frequent user of BIPV technology, being a major owner of communal buildings. The advantages of integrated photovoltaics over common non-integrated systems is that the initial cost can be offset by reducing normal construction costs of building materials and labour for parts of the building replaced by the BIPV modules. BIPVs will become one of the fastest growing segments of the solar industry worldwide with an assumed capacity growth of 50% or more from 2011 to 2017.2

Using PV technology in SSCs reduces the carbon footprint, but their combination with thermal systems – where heat transfer fluid is circulated through the modules – means that these BIPV-T systems offer the possibility of truly carbon neutral buildings.

Peter Harrap, the chairman of IDTechEX, points out that wind power is another SSC technology that may eventually be incorporated into suitable sites. He acknowledges, however, that water power is likely to be a more acceptable alternative since river-based turbines are more discreet.

Underground farm
A city needs food for its inhabitants and food is continuously brought in by supply chains from rural land both nationally and internationally. There are ways to grow food within the city itself and a recent initiative is to use disused tube tunnels.

Growing Underground is being hailed as London’s first underground farm and grows microgreens and salad leaves in an abandoned complex of tunnels 33m below the streets of Clapham. Using the latest hydroponic systems and LED technology, the crops are grown year-round in a controlled environment. Its location in central London means significantly less food miles between producers and consumers.

Growing Underground is working towards carbon neutral certification. Its hydroponics system uses 70% less water than traditional open-field farming, and all nutrients are kept within the closed-loop system. In fact, vertical farming and urban agriculture are important aspects of the smart sustainable cities concept. The University of Nottingham in the UK has recently established an International Centre for Urban Agriculture. Nottingham’s Saffa Riffat and Yijun Yuan plan to exploit the thousands of miles of disused mine tunnels in both the UK and China for growing food in vertical farming banks using hydroponics. One problem with this approach is that mine shafts are not normally found in urban environments so this will leave a carbon footprint.

Crime surveillance
Crime prevention, meanwhile, is another issue smart cities will need to address, Harrap points out. However, there are privacy issues. Ordinary cameras have been used in the US in Las Vegas and although they are effective at spotting people who drop litter and identifying drug dealers, they have started to be removed and replaced with Infrared cameras that cannot identify miscreants. Harrap makes the point that too much computer- and AI-based monitoring of people is unwelcome and so the emphasis has moved from crime prevention to improving city efficiency and quality of life. On the other hand, says Harrap, the opposite is happening in China where surveillance can be state-mandated. In short, there is a fine line between what is acceptable in liberal western democracies and what is acceptable in other regimes around the world.

Another growing problem is waste control. Around 1.7–1.9bn t of municipal solid waste is generated every year worldwide and this will only increase as people move into urban areas.4 Efficient waste removal is essential to maintain quality of life and the approach being envisaged is to use the Internet of Things (IoT). On a domestic scale, this basically means using sensor technology to tell municipal waste authorities when garbage needs to be picked up from homes and businesses.

Sustainable cities
In an ideal world, we would simply build a SSC and drop the inhabitants into this paradise. Bill Gates has made a start on this audacious idea by purchasing 25,000 acres of land in the Arizona desert at a cost of $80m. His plan is to build the city of Belmont around high-speed data networks, driverless transportation and to enable the development of new, tech-based industries.4 It should be built within eight years and will have 80,000 homes – comparable to Salt Lake City in population size; however, there are problems with the water supply. Since the early 1990s, the Colorado River has been drying up and since it supplies California and Nevada as well as Arizona, planning laws around water conservation are stringent. One plus for Belmont is it will incorporate water saving technologies into the fabric of the city.

SSCs are a hot new topic, the trouble is that they may be an overhyped hot new topic. As Thomas Elmquist of Stockholm University, Sweden, says it is not yet possible – if it ever will be – for cities to become truly sustainable no matter how smart they are. This is because cities are centres of production and consumption and urban inhabitants are reliant on resources and ecosystem services, from food, water and construction materials to waste assimilation, produced and distributed at locations away from the cities themselves. ‘Although cities can optimise their resource use, increase their efficiency and minimise waste, they can never become fully self-sufficient,’ Elmquist says. The entire world is now interconnected, and individual cities cannot be considered ‘sustainable’ without acknowledging and accounting for their teleconnections – that is, their long-distance dependence and impact on resources and populations in other regions around the world.

It is hard to disagree with this argument. With the increasing speed of rural broadband and food produced locally in the countryside, one has to ask whether the expansion of cities and the need for an SSC infrastructure is as inevitable as the evangelists think. Many people, especially in the creative industries, work quite happily from home and therefore travel significantly less than they used to. Indeed, with the introduction of Skype and other teleconferencing software it becomes a moot point whether it is really necessary to travel anywhere.

Maybe the SSC revolution will see itself made redundant before it even gets started.