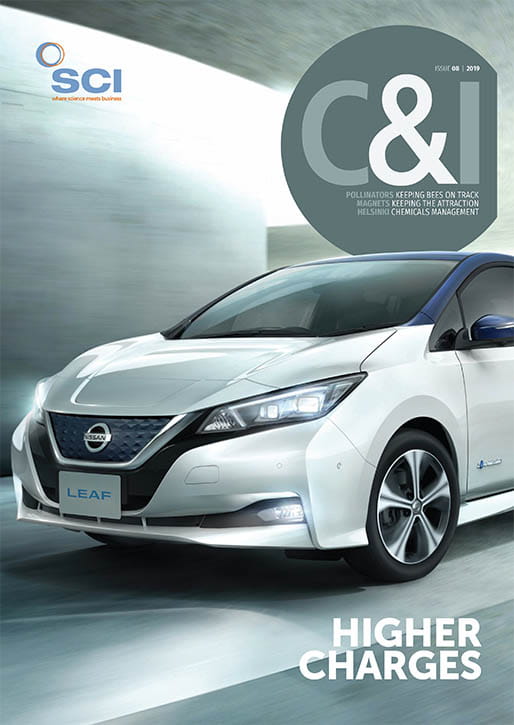 The race is on, particularly in Europe, to build battery production capacity to take advantage of what is likely to be a massive switch to electric powered cars and other light duty vehicles, Sean Milmo reports

A key element in the manufacture of electric vehicles (EVs) is a secure and reliable supply chain of chemicals and materials, which currently account for around 40% of their value.

‘The future is electric,’ Thomas Ulbrich, head of EVs at Volkswagen, told a recent automobile conference in London, UK. But as analysts have warned, the transition to electric power will be so expensive that, in its current financial state, the car industry cannot afford it. Inevitably, in the rush to become players in the battery supply chain, there will be many losers.

The impetus behind the move to EVs comes from the 2016 Paris agreement on climate change under which governments across the world committed to a dramatic reduction in greenhouse gas emissions to limit the global temperature increase to 2°C by 2050. The car industry is having to adopt electric power in order to comply with strict regulatory CO2 emission limits introduced after the Paris pact.
For carmakers and national governments, a priority now is access to reliable sources of chemicals and materials for producing batteries. The best way to do this is to establish their own chemicals and materials supply chains. ‘It is not just automobile manufacturers who want to get into battery production, but also those countries for whom car production is a major part of their manufacturing sector,’ explains Dave Oudenijeweme, head of technology trends at the Advanced Propulsion Centre (APC), a joint venture between the automotive industry and UK government to facilitate the development of new battery and powertrain technologies.

Asian countries with large car manufacturing sectors already have well established battery industries. The vast majority of leading producers of battery cells, which is the most complex and expensive part of battery manufacture, are Chinese, South Korean or Japanese, many of them with roots in electronics because of the precision required in making the cells.

China has the world’s biggest EV market, selling over 1m units in 2018, with a market share of 4%. EV sales in the US totalled 361,000 units in 2018 following greater success for Tesla and the influence of California’s Zero Emission Vehicle programme. The EU EV market grew by 38% to 302,000 units, according to figures from Transport & Environment, Brussels. In both the US and Europe, EVs each had market shares of around 2%.

Tesla, already backward integrated into industrial-scale battery manufacture through a partnership with Panasonic of Japan, has the resources and technological expertise to play a crucial role in the expansion of the US EV sector.

In terms of battery production capacity, Europe has much more catching-up to do. Most of its EVs have batteries made from cells and modules imported from Asia.

On the other hand, due to its R&D prominence in chemicals and materials, it has a strong position in the intellectual property for battery cell components. Europe is a big exporter of battery cell raw materials while Umcor of Belgium and BASF are leaders in cathode electrode chemicals, mainly comprising compounds of lithium-ion, nickel, cobalt, aluminium and manganese.

With lithium-ion likely to remain the prevalent chemical in battery cells for at least the next ten years, European companies, universities and research institutes can contribute to meeting the major challenges in batteries of reducing costs, increasing energy and power densities, improving safety and, in particular, developing processes for recycling and reusing battery materials.

Above all, it has the time and knowledge base to develop and commercialise the new chemistries that will start to radically alter battery cells in the 2030s as the internal combustion engine (ICE) starts to disappear from the global auto sector.

‘Within the next 20 years, the cost of a battery cell should have been reduced from $130/kWh to $50/ kWh,’ said David Greenwood, WMG, International Manufacturing Centre, Warwick University, UK. ‘The energy density of a cell should rise from 250Wh/kg to 500Wh/kg and the power density of a battery pack should quadruple to 12kW/kg.’

Among the major innovations ready for industrial-scale production by the late 2020s to early 2030s are solid state batteries, whose solid electrolytes and separator components would replace current liquid electrolytes. Other potential advances include lithium sulphur and sodium-ion batteries whose cheap materials would help bring down costs.

By the 2030s, the European car sector – like most of the auto market elsewhere – will have begun to be transformed by the demise of ICE-only vehicles. EU production of ICE-only light vehicles will have decreased to zero by 2030, according to a study on automotive batteries issued in April 2019 by APC and Innovate UK.

Mild hybrid vehicles or those with battery assisted engines will account for 39% of output, full hybrids with two engines – one ICE and the other battery powered – 24%, plug-in hybrids rechargeable from an external source 13%, battery EVs 22% and fuel cell EVs 7%.
European EV sales, comprising the various hybrids and battery EVs (BEV), are expected to take off in the next two years with an even faster rate of growth than the 38% EU growth in 2018. The trigger will be EU mandatory targets of a fleet average for new auto sales of 95g CO2/km, with which car manufacturers have to be 95% compliant in 2020 and fully compliant in 2021.

Leading carmakers in Europe are preparing to launch a range of EV models over the next few years, which through economies of scale and improved technologies will help to bring down battery costs and raise performance, particularly in the range of distances before recharging. At the same time, charging times themselves will become shorter.

Perhaps the most ambitious sales objectives have been set by VW, Europe’s largest car manufacturer. By 2025, it aims to have produced 15m EVs, using its MEB modular production platform for electric cars at eight sites – the majority of them in Europe. By 2028, this will have risen to 22m EV sales, shared by 77 different models.

Rapid growth in demand for EVs in Europe will offer opportunities not just for auto manufacturers to reshape themselves, but also for countries to set up national battery industries backed by state funds, particularly for R&D in chemicals, materials and processes. The UK has been among the first to draw up plans – backed by the country’s automotive and chemicals industries – for establishing a national supply chain for battery chemicals and materials, centred on at least one, if not more, cell factories with capacities of 10-20GWh.

Automotive Energy Supply Corporation (AESC), a former Nissan subsidiary, has a facility in northeast England producing battery packs with AESC-made cells for the Japanese car company’s Leaf EV model manufactured at a nearby plant in Sunderland. Nissan sold AESC earlier this year to China’s Envision Group, which afterwards announced plans for a 20GWh battery plant at Wuxi, China, which will almost quadruple its existing global lithium-ion cell manufacturing capacity. UK based Jaguar Land Rover, owned by India’s Tata Motors, has also revealed plans to set up a Battery Assembly Centre at Hams Hall in the West Midlands, which will supply packs to a JLR plant at Wolverhampton, making electric drive units (EDUs). In July, JLR announced its next-generation Jaguar XJ flagship saloon, launching in 2020, will be a pure electric model built at its Castle Bromwich plant.

The UK has the expertise, R&D and production strengths to create a coherent battery supply chain because of its large chemicals industry and car sector – which built 1.6m vehicles and 2.7m engines in 2018. ‘The UK can have a closely integrated, closely networked supply chain – from precursors to vehicles – delivering faster and better innovation than our European counterparts,’ Chase said.

Further downstream, Johnson Matthey is emerging as potentially a major player in cathode chemicals with the recent launch of eLNO, an ultra-high energydensity cathode material. But its first commercial plant will be in Poland, supported by a material supply agreement with Nemaska Lithium, a Canadian producer of lithium hydroxide and lithium carbonate from spodumene, an aminosilicate mineral.
The UK also has a lithium-ion battery electrolyte plant on Teesside, operated by Mitsubishi of Japan.

One of the UK’s great strengths in an internationally competitive automobile battery market will be its excellence in R&D. Already around £280m is being invested, mainly by the UK government, into a range of research projects. One focuses on developing recycling processes – seen not only as a national but international requirement to ensure the long-term sustainability of battery materials supplies.

The UK Battery Industrialisation Centre (UKBIC), close to Warwick University, a leader in battery research, is due to start operating in 2020 to help the scale-up and commercialisation of battery innovations.

The West Midlands and northeast England have the potential to become clusters for the development and production of battery cells, modules and packs. The northeast has R&D prominence through the governmentbacked Centre for Process Innovation (CPI), a Teesside-based specialist in formulation and process development, which is doing collaborative work on solid-state lithium batteries for delivering ultra-fast EV battery charging.

But before it can provide a complete supply chain for any giga battery cell factory, the UK still has large gaps to be filled mainly in processing capabilities for cathode and anode materials. For cathode materials, these include continuous stir tank reactors, filtering, washing and drying, milling and mixing with lithium carbonate. For anodes, there is a need for capacity in grinding, mixing, extrusion, baking and impregnation and graphitisation.

A survey of UK-based chemical companies by E4Tech has found that around 60 are keen to invest in a UK battery supply chain. But before committing, they need ‘clear and early demand signals’, according to the consultancy. Investment decisions could be delayed because of postBrexit uncertainties about demand levels.

‘For the UK to become a leader [in auto battery production], it is imperative that we deliver an integrated supply chain and R&D ecosystem faster than our European counterparts,’ Greenwood told the SCI conference.

However the UK, like other EU countries with ambitions, is struggling to keep pace with battery development and production initiatives on the international level.

Among the planned auto battery plants announced in the past couple of years have been projects by Korea’s LG Chem and SK Innovation in Poland and Hungary, respectively, and China’s Contemporary Amperex Technology (CATL) in Germany. Investments by Asian operators in Europe could raise the region’s share of global battery cell output from the current 1% to 10- 15%, according to French consultancy Avicenne Energy BASF is constructing a battery materials plant at Harjavalta, Finland, adjacent to a nickel and cobalt refinery owned by Russia’s mining company Norilsk.

An important trend is for major international car manufacturers to set up vertically integrated battery operations covering not just the making of modules and packs but also cells.

In mid-May 2019, VW confirmed plans for battery cell production at its site in Salzgitter, Germany, where it already has an R&D centre for batteries, including battery cells. Initially at least, the facility will be run in partnership with LG Chem and SK Innovation, but senior VW executives have indicated that in the long term the company wants it to be a predominantly VW operation.

The French and German governments have come together to jointly subsidise EU cross-border car battery cell consortia to help European carmakers become less dependent on Asian suppliers. The first venture to benefit would be a partnership between the French car company PSA Group, its German subsidiary Opel, and Saft, the battery subsidiary of French energy giant Total, which plans to build a cell plant in western Germany.

Meanwhile, as demand for EVs accelerates in Europe over the next 10- 15 years, the biggest threat to secure battery supplies could be overcapacity rather than shortages.