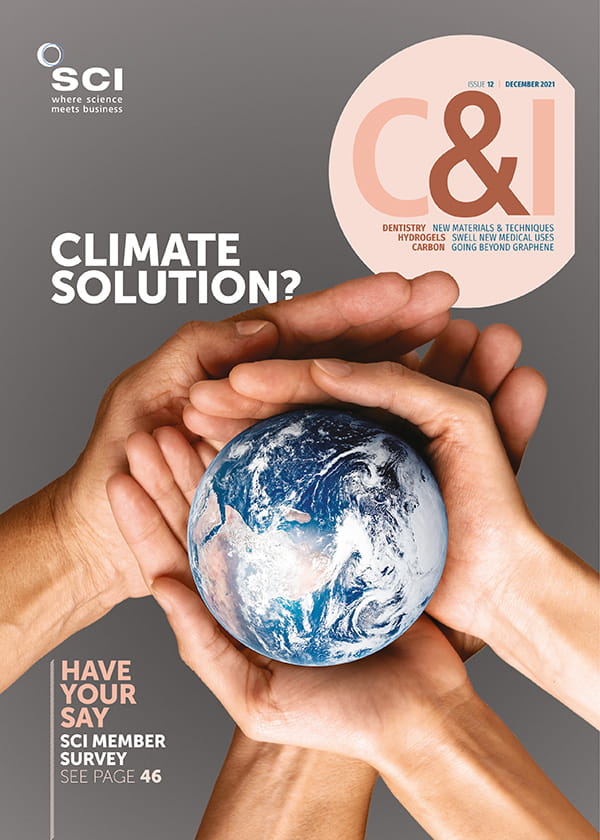 The market for hydrogel drug delivery is projected to reach $10.6m by 2028, according to market research firm Grand View Research. Hydrogels have been heavily investigated for biomedical applications such as drug delivery, wound dressings and tissue engineering because over 90% of the weight of hydrogels is water, making them top material candidates. Their tunability makes them incredibly versatile and they can be prepared in many forms: as a large, stiff slab, as micro- or injectable nano-sized particles or as liquids that gel in situ.

For chronic ailments such as diabetes that require regular administration of insulin, hydrogels that can carry and release insulin in response to fluctuating glucose levels for long periods could reduce the frequency of injections. With a single injection, one long-lasting hydrogel formulation was reported to maintain blood glucose levels for up to two weeks in diabetic mice (npj Flex. Electron., doi: 10.1038/s41528-021-00122-y).

The delivery of drugs through mucous membranes, such as the eyes or nose, is well-suited to hydrogels. If formulated as micro- or nano-gels, drug-bearing hydrogels could penetrate mucosa. Alternatively, a hydrogel could adhere to the mucosa while slowly releasing drugs through it. Formulation scientist Vitaliy Khutoryanskiy at the University of Reading, UK, is working on both strategies. This capability could allow drugs applied through the nose to bypass the blood-brain barrier, he says. ‘There’s a connection between the nasal cavity and the brain, so the drug can travel to the brain directly.’

Bladder cancer is another possible application area. Patients with bladder cancer often receive chemotherapeutic drugs through a catheter into the bladder after surgery, but the bladder continuously produces urine, which is excreted. This not only causes the patient to have to use the bathroom frequently, but also wastes the chemotherapeutic drugs. Khutoryanski is also working to design a hydrogel that could stay on the mucous lining of the bladder and deliver drugs without being interrupted by urination.

Antimicrobial peptides immobilised on the surface of a hydrogel quickly disrupt the membranes of bacteria they contact, even antibiotic-resistant bacteria such as Staphylococcus aureus. The researchers have started a spin-off company, Amferia, and are partnering with Swedish medical device distributor Triolab to bring this antimicrobial wound care patch to veterinary care markets.

Because they resemble extracellular matrices, hydrogels could serve as scaffolds to guide the healing of damaged tissues in the body, or for supporting cells as they grow into tissue for transplants.

350%
A hydrogel made from thioester-modified poly(ethylene glycol) and poly(ethyleneimine) exhibits similar mechanical properties to human skin and can absorb significant quantities of liquid, swelling up to 350% of its volume.

Hydrogels can also help close wounds that are created within the body, such as those occurring after colon polypectomies. During routine colonoscopies, polyps are usually removed whenever they are observed. But that creates wounded areas that are left to heal on their own. Complications are infrequent, but they are challenging to solve when they do happen, says Mark Grinstaff, a materials scientist at Boston University, US. With millions of colonoscopies performed every year, the numbers add up.

Biotech company Boston Scientific approached Grinstaff’s team for a material that helps address this need. The researchers developed temporary hydrogel wound dressings that can be delivered via the endoscope and formed directly on damaged colon tissue (ACS Biomater. Sci. Eng., doi: 10.1021/acsbiomaterials.1c00549). As a bonus, the hydrogel’s pores are small enough to physically block bacteria from entering and reaching the wounds, preventing infection.

One strategy is to supplement cells with oxygen while they are waiting for new blood vessels to develop (Adv. Healthcare Mater., doi: 10.1002/adhm.201901794).

The researchers injected the micro-gels into another hydrogel scaffold containing fibroblast cells. After the endothelial-cell-bearing micro-gels entered the scaffold, they sprouted and formed tiny blood vessels, supporting the growth of the fibroblasts.

Because they resemble extracellular matrices, hydrogels could serve as scaffolds to guide the healing of damaged tissues in the body, or for supporting cells as they grow into tissue for transplants. For instance, the voids left after tumours are removed could be filled with a hydrogel containing cells or drugs. A popular strategy is to use stem cells to regenerate tissue. But while stem cells have the potential to differentiate into all sorts of cells, the problem is directing the differentiation, says Luo Gu, a biomaterial engineer at Johns Hopkins University, US.

While a postdoctoral researcher at Harvard University, Gu and his colleagues found a key parameter that can guide stem cell differentiation: when hydrogels yield to the strain that cells exert on them (Nature Mater., doi: 10.1038/nmat4489).

Gu and his colleagues prepared hydrogels that become softer, or relax, with mechanical stress by using low-molecular-weight alginate polymers that are less entangled with each other, compared with high-molecular-weight ones. The researchers further reduced the entanglement by introducing poly(ethylene glycol) spacers to the alginate polymers, lowering the time needed for stress to halve to just one minute. Stem cells grown in fast-relaxing hydrogels spread and proliferated more than those grown in conventional hydrogels. They also tended to differentiate into bone cells after sensing the hydrogel’s rapid relaxation.

Second degree and worse burns are typically bandaged to protect open wounds and prevent infection, but when the bandages need to be removed and replaced, they can rip off newly formed, fragile skin tissue. That causes great pain to patients. In children’s wards, healthcare staff have to anaesthetise children before they can begin replacing bandages, says Mark Grinstaff, a materials scientist at Boston University, US. ‘This is a big ordeal.’ Sometimes, bandages have to be replaced more than once a day.

Working with collaborators from the Shriners Hospitals for Children in Boston, US, which specialises in burn care, Grinstaff and his colleagues developed a hydrogel that can be dissolved and washed away without damaging newly formed skin (Biomater. Sci., doi: 10.1039/d1bm00711d).

The researchers modified a poly(ethylene glycol) with internal thioester groups to serve as a cross-linker. A solution of this cross-linker mixed with another containing a branched poly(ethyleneimine) generates a hydrogel within a few minutes. The hydrogel exhibits similar mechanical properties to human skin and can absorb significant quantities of liquid exudate, swelling up to 350% of its volume.

Crucially, the thioester groups within the modified poly(ethylene glycol) cross-linker can be disrupted by spraying an aqueous solution of cysteine methyl ester on the hydrogel. As the cross-linkers break up, the hydrogel loses its mechanical properties, de-adheres, and becomes soft enough to wash away within 30 minutes.

Tested on pigs with second degree burns, the dissolvable hydrogel reportedly allowed tissue healing with comparable necrosis, ulceration, and inflammation compared with standard of care dressings such as conventional sterile gauze, xeroform gauze, and the foam wound dressing Mepilex, with the added benefit of safe removal. The researchers are now working towards commercialising the dissolvable hydrogel wound dressing and exploring opportunities to speed skin healing by incorporating drugs that can be released to the burn wounds.

Hydrogels can be used in 3D-printing techniques to produce complex, sizeable scaffolds. Printing with hydrogel inks that also carry biological cells, or 3D-bioprinting, can help overcome limitations with conventional tissue engineering, where cells are simply seeded on the surface of scaffolds. ‘With 3D-bioprinting, we could have homogeneous distribution of cells,’ says Nureddin Ashammakhi, a biomedical scientist at the University of California, Los Angeles, US.

At King Abdullah University of Science and Technology, Saudi Arabia, bioengineer Charlotte Hauser and her team is developing bioinks from ultrashort peptides that comprise up to four amino acids (Nano Lett., doi: 10.1021/acs.nanolett.0c04426).

The peptides self-assemble into a hydrogel rapidly when in contact with a physiological buffer. To use the hydrogel in 3D-bioprinting, Hauser and her colleagues built a 3D printer with a specialised nozzle that allows the peptides to mix with a buffer solution and biological cells right before extrusion. Hauser believes that for tissue regeneration or engineering, peptide hydrogels are advantageous over conventional hydrogels based on polymers, because the internal structure of peptide hydrogels comprise nm-diameter fibres, resembling the fibres in extracellular matrices such as collagen. In comparison, the fibres within polymer hydrogels have microscale diameters, about 1000 times larger, Hauser says.

New opportunities continue to emerge. Gu, for example, is working to develop hydrogels for immunoengineering. Dynamic hydrogels can help to deliver or recruit immune cells, explains Gu, which could lead to more effective vaccines that elicit a higher or a longer-lasting antibody response.

Hydrogels can also be used to build smart implants, says Ashammakhi. He envisages implants made from smart hydrogel-based biomaterials that are not only more compatible with human tissues than conventional ones made from plastic or metal, but that can also sense and respond to their surroundings, heal themselves, or degrade without the need for their removal. ‘We’re expecting to see more fusion of technologies,’ he says.

Post-operative adhesions occur when scar tissue, forming naturally after surgeries, winds up connecting parts of the body that are not supposed to be joined together. They occur after heart, abdominal, or pelvic surgeries, and are risky and costly to reverse. Adhesions of the heart are particularly risky. Normally, the heart is wrapped by the pericardium, a sac-like membrane, but surgeons cannot sew it up after open-heart surgeries to avoid exerting pressure on the heart. That leaves the heart vulnerable to scar tissue joining it to other parts of the chest cavity, particularly the sternum. When that happens, for example, during repeat surgeries to repair congenital heart defects in children, the surgeon would have to carefully cut through the bone and then dissect the adhesion – which could lead to catastrophic haemorrhage.

‘The heart is definitely a challenging location,’ says Karen Christman, a biomedical engineer at the University of California, San Diego, US. Sometimes, the adhesions could be so severe that they cannot be dealt with, a situation that happened with Christman’s uncle when he needed a repair on a valve replacement. ‘The adhesions were so dense, the surgeon basically called it a wall of cement,’ she says.

Christman and her team developed a hydrogel that could be sprayed on heart tissue and form a barrier that prevents adhesions in the first place. ‘We basically create a temporary epicardium,’ says Gregory Grover, who helped develop the first generation of the hydrogel as a post-doctoral researcher with Christman (Nat. Commun., doi: 10.1038/s41467-021-24104-w).

A necessary criterion for this hydrogel is that it cannot swell much, unlike most other hydrogels. ‘It’s a very tight space [around the heart] and there’s no room for material swelling,’ Christman explains. But the hydrogel still needs to be soft and flexible enough to move with the heart as it beats.

To prevent swelling, the team developed an extensively crosslinked hydrogel using three star-shaped polymers each with eight branches, formulated in a specific ratio to achieve a balance of mechanical properties, gelation time, minimal swelling, and speed of degradation. Two of them contain aldehyde and aminooxy functional groups at the ends of their branches, which react and form oxime bonds rapidly, enabling gel formation within 3s. A third, eight-branched polymer carries a catechol functional group inspired by those in mussel adhesive proteins, which helps the hydrogel adhere to heart tissue before gelling. After it sets, the hydrogel barrier becomes non-adhesive.

Most adhesions form within the first month after surgery, so the researchers designed this hydrogel to hydrolyse slowly, lasting six to eight weeks. Christman and Grover have started a company, Karios Technologies, to commercialise this anti-adhesion hydrogel.