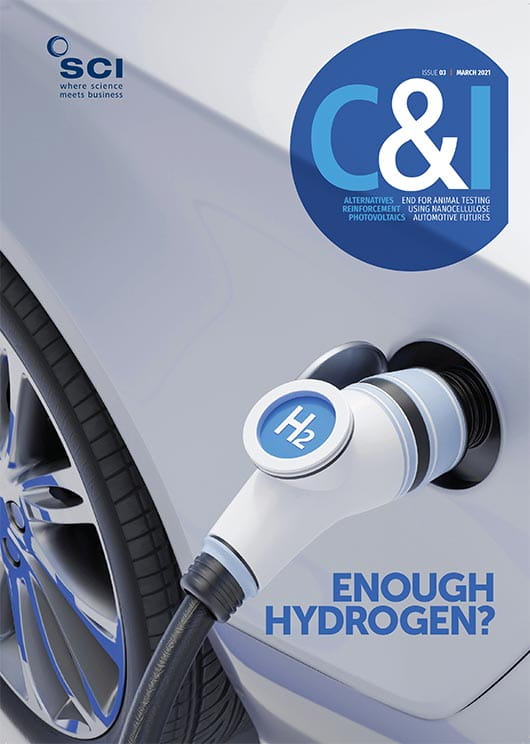 Hydrogen is the lightest, simplest and most abundant chemical element in the universe. It could also provide a clean source of fuel and heat for our homes, transport and industry, according to a recent UK All Party Parliamentary Group report on hydrogen1.

But hydrogen’s green credentials depend on how it is made. Around 70m t/year of hydrogen is produced worldwide – used eg to make fertilisers and petrochemicals. However, ca 95% of this is generated by steam reforming of natural gas, emitting 830m t/year of CO2, equal to the combined CO2 emissions of the UK and Indonesia.

Hydrogen reacts with oxygen in fuel cells to produce electricity, water and heat. ‘Hydrogen is an excellent energy store and it has no carbon, so it’s really helpful for reducing emissions,’ says David Hart, hydrogen expert at consultancy E4tech and a visiting professor at Imperial College London.

Currently, however, the economics of green hydrogen don’t stack up, says Billy Wu, senior lecturer in electrochemical engineering at Imperial College London. ‘It is more expensive than traditional steam reforming of methane.’


Around 70m t/year of hydrogen is produced worldwide and 95% of it is generated by steam reforming of natural gas, emitting around 830m t/year of CO2.

However, this could change in future, he adds, pointing out that more offshore wind was point one on the UK government’s Ten point plan for a green industrial revolution, released in November 2020.2 Scotland’s abundance of offshore wind power generation could one day allow the UK to become a major international exporter of green ammonia and green hydrogen, notes Wu.

Point two of the policy paper focused on the potential of hydrogen. ‘Producing low carbon hydrogen at scale will be made possible by carbon capture and storage infrastructure,’ the paper noted. It also referred to pioneering UK heating trials, including a proposed network demonstration in Fife to distribute hydrogen to 300 homes over a four-year period.

But while the report described the UK as a world leader in investigating the use of hydrogen for heating, not everyone is convinced. Robert Steinberger-Wilckens at the University of Birmingham, UK, who leads the UK’s largest academic fuel cells and hydrogen group, describes UK efforts at decarbonising home heating as ‘completely unworkable’. If you take natural gas and turn it into hydrogen, you lose 15% of the energy content, he points out. Carbon capture, transport and storage would lose around another 15%, he estimates, ‘so hydrogen can never be cheaper than say one and a half times the price of natural gas’.

Blue hydrogen is not currently viable, experts agree. Moreover, there is simply no incentive to generate blue hydrogen, says Tom Baxter, honorary lecturer at the University of Aberdeen, UK, and chemical engineering consultant. ‘All it does is cost more money and require more energy. Unless carbon has a price for industry, I see carbon capture as just something that is there and will not be used commercially.’

Without carbon capture, he believes turning natural gas into hydrogen for heating homes makes little sense and is more expensive. ‘It is [also] much more leaky than natural gas. I think we’d see a lot more problems with hydrogen on the gas grid’.

The greenest way to generate hydrogen is via electrolysis of water, powered by solar or wind energy. As far as Steinberger-Wilckens is concerned, ‘the green colour is the only one we should be interested in, because that is the only one that actually solves a problem. The others just kick the problems into the long grass, leaving them for other generations to tackle’.

Most people predict that electrolysis is how hydrogen will be produced in future, but ‘you lose about 30 to 40% of the value or the power in electricity by converting it to hydrogen,’ says Baxter. ‘No one can tell me in that scenario that hydrogen will be cheaper that electricity.’ Electricity is four times the price per kWh of gas, he points out, which is why few people heat their homes with electricity.

However, others are more hopeful. The UK policy paper aims for the UK to develop 5GW of low carbon hydrogen production capacity by 2030. ‘Arguably the UK is a leader in hydrogen,’ says Wu, with companies such as ITM Power in Sheffield, which produces electrolyser units; Ceres Power; which makes solid oxide fuel cells, and AFC Energy; which makes alkaline fuel cell systems.

Wu envisages electrolysers placed close to abundant green electricity sources, such as offshore wind in Lancaster or Scotland, converting excess electricity from renewables into a chemical feedstock, which will not diminish over time. He also notes that with more electric vehicles plugging into the grid, it will be difficult to place an extra burden on it from heating homes with electricity.

In 2021, the UK government will publish its Hydrogen Strategy and begin consultation on government’s preferred business models for hydrogen. By 2023, it aims to complete testing to allow up to 20% of blending of hydrogen into the gas distribution grid for all homes on the gas grid. ‘We can already inject some hydrogen onto natural gas networks to offset some of the carbon,’ says Wu.

5GW
A UK government policy paper aims for the UK to develop 5GW of low carbon hydrogen production capacity by 2030.

1m
China is predicted to become the biggest market for hydrogen cars, with the country aiming to build 1m vehicles by 2035.

150kg
For a hydrogen car with a range of 500km, fuel cell and hydrogen storage would weigh approximately 150kg.

Steinberger-Wilckens would like to see more attention given to other sustainable energy vectors. He is frustrated to see demo projects funded by the EU using black hydrogen – filling buses with hydrogen made from natural gas reforming or with electricity from coal fired power stations. ‘The latter will cause four times the carbon emissions as a diesel engine’. While governments tout green hydrogen, most hydrogen for the foreseeable future will likely be black hydrogen, transitioning to blue hydrogen.

‘There is a very powerful lobby pushing for hydrogen and there is a convincing story’, says Baxter. He argues that there should have been a heating and a transport energy working group, not a hydrogen working group. The sponsors of the All Party Parliamentary Group on Hydrogen are Baxi Heating, Bosch, Cadent, EDF Energy and Utilities Alliance, Equinor, National Grid, Northern Gas Networks, SGN and Shell. ‘Hydrogen will be fossil derived for the next 10 to 15 years,’ Baxter predicts, ‘hence fossil fuel companies are interested in hydrogen.’

The UK could also create green hydrogen demand through policies for large industries. ‘There’s a lot of interest in decarbonising heavy industry like steelmaking, and using hydrogen as part of that,’ says Hart. Swedish state-owned miner LKAB announced in November 2020 a huge investment to produce iron using emissions-free hydrogen over the next 20 years. But Hart notes that there simply ‘isn’t enough hydrogen right now to help decarbonise anything major in industry. There’s a lot of ongoing work in building capacity’.

Hydrogen for transport also has its doubters, especially with electric cars bumping their way into the market. Lithium-ion battery costs, for example, have fallen dramatically in recent years. Market analyst Statista estimates that Li-ion battery pack costs fell from $917/kWh in 2011, to $293 in 2016, to $135 in 2020.3 However, Steinberger-Wilckens says electric cars are no less expensive than ten years ago. He notes that to go from 100km to 200km range in a battery electric car, means going from a 80kg to a 150kg battery. Tesla vehicles contain a battery weighing around 500kg. To push range further, ‘what you get is a tank on wheels,’ says Steinberger-Wilckens.

For a hydrogen car with a range of 500km, fuel cell and hydrogen storage would weigh something like 150kg, he estimates. The volume taken by hydrogen, pressured to 70,000kPa in Europe, is larger than the petrol tank for an internal combustion engine car, though comparable in volume to batteries. Yet hydrogen cars have had trouble getting off the start line in many countries. Daimler Mercedes-Benz announced in April 2020 that it would end its interest in hydrogen cars, due to the cost of the fuel cells. ‘Right now it doesn’t make economic sense to have small-scale hydrogen vehicles,’ says Wu, although he expects costs will come down. Wu says that platinum is mainly used to catalyse reactions in hydrogen fuel cells, which is one contributor to high cost. Also, he adds, the Nafion proton exchange membrane in fuel cells remains expensive.

A new version of Toyota’s hydrogen fuel cell car, Mirai, was launched in December 2020 with a range of 650km and a starting price tag of £65,000. Riversimple in Wales has designed its Rasa hydrogen car, which it plans to lease out to customers. Pitting batteries against hydrogen is a mistake, and a mix of solutions is needed, the company says. Even fuelled with hydrogen from natural gas, their car is claimed to represent ‘a 60% reduction in the well-to-wheel emissions of the lowest emitting cars on the market today’. According to Hart, technology breakthroughs are not necessary for hydrogen to power vehicles, and it is more about building up mass production capacity.

A challenge in the UK is that the refuelling infrastructure for hydrogen is almost non-existent. Most of the 1500 units of Mirai sold in 2019 were to customers in California who can drive to a hydrogen fuelling station. Most analysts predict that China will become the biggest market for hydrogen cars, with the country aiming to build one million vehicles by 2035. In January 2021, it was announced that Hyundai would build a hydrogen fuel cell factory in Guangzhou, China, with The Financial Times reporting that the company expects to make about 6500 fuel cell systems/year at the facility, for its Nexo electric SUV, which replaces its ix35 vehicle.4

Steinberger-Wilckens argues that the technology for hydrogen cars and the infrastructure is ready, and what is necessary is for the true costs of the internal combustion costs to be borne by the user, not society.

Another challenge is hydrogen storage, Wu says. ‘Not enough people talk about volume. Often we have these high pressure vessels to store hydrogen and they are bulky.’ It also means that hydrogen storage tanks for vehicles cannot be shaped the same way as a petrol tank. Metal hydrides and metal organic frameworks (MOFs) have been looked at as ways of absorbing hydrogen, with moderate success.

Steinberger-Wilckens views storage as less of an issue, noting the cost of a hydrogen tank has fallen from £10,000 five years ago to £2000 today.

Antonelli says hydrogen allows much faster fuelling than battery power, avoiding concerns about battery degradation. ‘The bigger a vehicle becomes, the more and more advantage goes to hydrogen,’ he says, ‘to the point where it is almost ridiculous to imagine using a lithium battery in a truck, because of the weight.’ Indeed, Hyundai has begun delivering a heavy-duty truck called Xcient with a fuel cell that can be charged in 8 to 20 minutes at 35,000kPa tank pressure, while Daimler Trucks announced in September 2020 that it would begin customer trials of hydrogen fuelled trucks with a range up to 1000km in 2023.