The International Energy Agency (IEA) has released its Critical Minerals Policy Tracker, which sets out nearly 200 policies and regulations from 25 countries and regions related to critical minerals.

The IEA says that the Policy Tracker reveals that countries are using an array of approaches to achieve their pre-determined goals. However, the IEA noted that: ‘There is growing recognition that policy intervention is needed both to ensure that an adequate supply of critical minerals is available to meet the needs of the energy transition, and to ensure that those supplies are developed responsibly and sustainably.’

Meanwhile, a UK government policy paper sets how the UK and South Africa will work in partnership on minerals for future clean energy technologies. Released during the last week of November, the paper indicates how both countries ‘aim to promote responsible exploration, development, production and processing of minerals in South Africa’. The country is a leading producer of minerals such as platinum, palladium and iridium, which are needed for hydrogen production. Both countries also aim to collaborate on clean energies and technologies, including battery storage, fuel cell technologies, energy efficiency and renewable energy technologies. 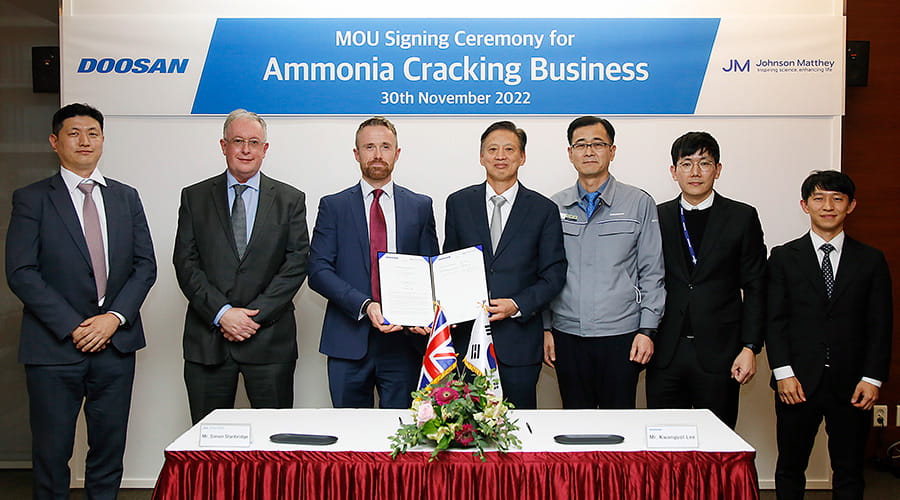 Continuing the move to renewable energy, Johnson Matthey and South Korea’s Doosan Enerbility have signed an agreement to develop hydrogen-fuelled power plants in South Korea. The partnership supports the Korean government’s plans to increase the share of clean hydrogen-based power generation from zero in 2022 to 2.1% by 2030 and 7.1% by 2036.

Johnson Matthey will provide ammonia cracking technology and catalysts, which convert clean ammonia into nitrogen and hydrogen. Jane Toogood, Chief Executive of Catalyst Technologies at Johnson Matthey said; ‘Whilst the technology we are developing for Doosan is specifically for the power industry, it could also decarbonise downstream industries through access to low carbon power.’

The importance of soils

Australia’s national science agency, CSIRO, is supporting the country’s National Soil Strategy with an investment of A$15 million to develop a national soil information system. The Australian National Soil Information System (ANSIS) project, which will be available in 2023, is a collaboration between the government, research organisations, industry, the private sector and the community.

The project will allow for the sharing of nationally consistent soil data and information. Currently soil data is collected by several organisations using different methods, making it hard to access, compare and use data from the different sources. Standardising data collection and access can promote digital agriculture innovation and is essential to managing Australia’s soils, CSIRO said.

The ANSIS project brings together Australian soil data from a range of sources. Credit: CSIRO/Stuart Walmsley.

‘This work gives us insight into biodiversity, water resources, landscapes, and coastlines, fauna, climate and geology. By harmonising Australia’s soil data, we can make it accessible across many fields of science and exploration,’ said Peter Wilson, ANSIS project lead at CSIRO.

A programme set up by the Global Environment Facility (GEF) will direct some $230 million in project grants to support countries in making their agrifood systems more sustainable, as well as maintaining biodiversity, combating land degradation, and contributing to national food security.

The programme will be led by the Food and Agriculture Organisation of the United Nations (FAO) and the International Fund for Agricultural Development (IFAD), and will aim to catalyse national and global shifts towards sustainable and resilient value chains for crops, forest products, commodities, livestock and aquaculture.

IFAD President Alvaro Lario said: ‘The GEF Integrated Program on Food Systems will support countries to define their national pathways and prioritise interventions that have proven to deliver measurable benefits for the climate, the environment and the people.’

The first session of the Intergovernmental Negotiating Committee (INC-1) to develop an international legally binding instrument on plastic pollution was held in Uruguay 28 November – 2 December. The treaty aims to end plastic pollution by 2040. The UK government said that this first meeting would allow countries ‘to assert their initial negotiating position, set the direction of discussion and reinforce the treaty’s overarching objective to bring an end to plastic pollution globally’.

Sheila Aggarwal-Khan, Director of UNEP’s Economy Division, commented: ‘We are not going to recycle or ban our way out of the plastic pollution crisis. Waste collection and recycling are extremely important, but they must be part of an integrated approach.’

Audi will be installing recycled plastic seat belt buckle covers, made from LyondellBasell plastic, in its SUV the Q8 e-tron. Audi said that it is the first time that safety components have been made in this way. ‘Audi’s vision is to use secondary materials wherever it is technically possible, economically viable and ecologically beneficial,’ said Philipp Eder, Project Manager for Circular Economy in the Supply Chain at Audi.