The David Miller Travel Bursary Award aims to give early career plant scientists or horticulturists the opportunity of overseas travel in connection with their horticultural careers. Benjamin Langendorf was awarded one of the 2015 David Miller Travel Bursaries and he travelled to Flagstaff Arizona, USA to attend the 8th International Conference of Mycorrhiza which took place between 3 - 7 August 2015.

Benjamin’s research interests are in the areas of plant-insect-microbes interactions including ecological and molecular aspects. He is currently a PhD student under the supervision of Prof. Xiangming Xu of East Malling Research (EMR) and Dr. Angela Hodge of York University. Presently, he is investigating the effects of pre-colonisation of strawberry (Fragaria x ananassa) runners and tray plants with arbuscular mycorrhizal fungi (AMF) to manage Verticillium wilt and conducting research on the effect of biotic and abiotic factors on strawberry root colonisation. Additionally he is studying the effect of AMF on wilt and the genetic and physiological basis of reduced wilt incidence by AMF.

‘The 8th International Conference on Mycorrhiza (ICOM8) took place from 3 - 7 August 2015 in Flagstaff, Arizona, in the southwest of the United States. It was organized by Northern Arizona University (NAU) under the auspices of the International Mycorrhiza Society. The theme of this conference was ‘Mycorrhizal integration across continents and scales’. The main goal of ICOM8 was to find common interests that transcend national borders and scientific disciplines, and to stimulate a productive exchange of information and ideas among mycorrhizal researchers from around the world, including physiologists, geneticists, taxonomists, ecologists, inoculum producers, and land managers.

‘Mycorrhiza is the most common underground symbiosis and is present in 92% of plant families studied (80% of species), with arbuscular mycorrhizas being the predominant form. This relationship consists in the colonisation of plant roots by the micro-organism and the creation of a site of nutrient exchange. Plants receive mineral nutrients such as inorganic phosphates and mineral or organic nitrogen. In return the plants provide carbohydrates to the mycorrhizal fungi. Beneficial microorganisms associations with plant roots contribute to sustainable horticulture and agriculture, including protected crops. Most agricultural crops could perform better and are more productive when well-colonised by mycorrhizal fungi. Many researchers highlighted the fact that mycorrhiza can help plants to overcome replanting stresses more successfully, to cope with conditions such as drought or high levels of salt, and to increase pest and/or disease resistance. The movements towards more sustainable forms of agriculture will result in an increased use of AM fungi and other beneficial microbes in the future. Facing the stark reality of increasing demands for food production, food security, reduction of nutrient deficiency and chemical sprays; mycorrhiza may support crop phosphorous nutrition and pest management in horticulture and agriculture.

‘ICOM8 was a truly global conference. Approximately 475 people from more than 50 countries joined together for a week of scientific and social exchanges. We could learn about exciting new discoveries and also reflect on the wisdom of ‘past giants’ in the field of mycorrhizal science. This emersion of knowledge helped to catalyse new ways of thinking and advance our abilities to study and understand mycorrhizal symbioses across scales.

‘I was amongst a group of UK-based delegates that attended the conference, which included representatives from a mycorrhizal inoculum producer company (PlantWorks Ltd), East Malling Research and the University of York.

‘During the course of the conference, I was able to present my paper and research. The paper I presented on the effect of arbuscular mycorrhiza fungi (AMF) on the growth and health of strawberry planting materials was very well received and I had a great opportunity to talk with numerous people about my PhD studies. 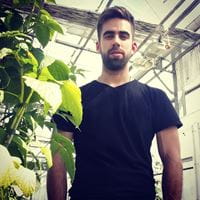 ‘My work described how mycorrhizal inoculation is beneficial to strawberry production for plant growth, yield and soil-borne disease tolerance. I also described that the early inoculation of strawberry with AMF in peat based substrate is possible and that AMF could survive several months under cold storage plants under water stress when compared with un-inoculated control treatments, however mycorrhizal treatment showed little difference in plant response to soil-borne pathogens and native AMF population in a glasshouse experiment.

‘As might be expected from an international symposium, both global and local issues were presented, some of which were relevant to UK horticulture, and some not. There seemed to be very little work addressing the role of mycorrhizal fungi on drought tolerance and water uptake to plants. The effects of horticultural practices such as chemical treatments, heavy fertilisation regimes or soil-less substrates on the formation and functioning of mycorrhizal symbiosis were under investigated. More investigations on host/AMF/artificial substrate combinations would be of great interest for the English horticultural industry. Instead there seemed to be an emphasis on the study on forests, grasslands or field crops mycorrhizal and microbial community structures using a metagenomic approach to characterise agro- and eco-system properties.

‘I am grateful for the contribution from AHDB, GCRI, RHS and the SCI Horticulture Group that enabled me to attend ICOM8. It was particularly important for me to experience an international conference of this kind since I have decided to orientate my research on the interaction between beneficial microbes against soil borne pathogens in horticultural crops. Attending this conference enabled me to network with key researchers in the relevant areas and to keep abreast of latest development in mycorrhiza research.’

*Benjamin’s full report about the conference and key presentations can be found here.