This year SCI's Food Group sponsored two awards at the 5th Nursten Flavour Symposium 29-30 June 2017, AFBI, Belfast. Imogen Ramsey from the Food Science Division, University of Nottingham, received SCI's sponsored prize for the best presentation and most promise in Industrial Applicability for her talk "Determining the influence of ethanol concentration on the temporal perception of sensory attributes in beer". Here she reports on her experience at the event.

The Nursten Flavour Symposium was held at the Agri-Food and Biosciences Institute (AFBI) Newforge in Belfast this year. Students were present from the University of Nottingham, University of Reading, University College Dublin, University College Cork and AFBI. The talks researched flavour in a variety of food such as lamb, cheese, sausages and beverages such as pigmented rice wine, coffee and alcohol free beer. There were also talks on bitter flavour perception in children, thermal tasters, and consumption context and aroma release. We were also lucky to have Dr Dave Baines (Baines Food Consultancy Ltd) talking about the health benefits of Indian Curry and Dr Avinash Kant (Pepsico) talking about his career in the industry as a flavour scientist, as well as a workshop on orange flavour by TREATT.

In addition, on the Thursday evening we were all taken to the Hilden Brewery in Lisburn, known as Ireland’s oldest independent brewery. Set in the outbuildings of Hilden house it was a lovely setting to finish the first day. This started off with a brief talk by the owner whilst tasting some of their beers. We were then taken on a tour of the brewery, showing us the brewing process from start to finish - something I found very interesting to see as a brewing student. We also had a lovely three course meal, with a great chance to network with the other students from different universities.

My presentation was about my research into ethanol concentration and its influence on the temporal perception of sensory attributes in beer. In this research, I spiked a 0% beer with different ethanol concentrations (0.5%, 2.8% and 5% ABV) and gave these to consumers to assess in terms of liking over time and overall acceptance. I also asked them to use relatively new sensory methodology Temporal Check-All-That-Apply (TCATA), whereby the consumer selects when a sensory attribute is present in the beer over time to evaluate the sensory properties of the beers - this technique captures all attributes and not just dominant sensations. The overall aim of this experiment was to see which attributes were driven by ethanol concentration and so the scientific understanding of the role of ethanol within beer can be progressed. This will lead to new product development of a no/low alcohol beer with more appealing sensory characteristics, which is what I plan to do in the next three years of my PhD working alongside Campden BRI who sponsor my PhD along with the BBSRC. 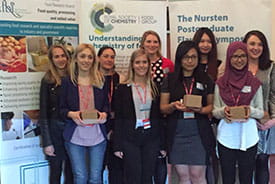 At the end of the second day there was the award presentation. I was lucky enough to win the SCI sponsored prize for the best industrial application presentation. All winners (as shown in picture) were women, showing the representation of women in science today!

Attending this symposium was a great way to network with other students and find out more about the research other universities are doing at the moment. It was also great to present to such a friendly group of people, with lots of interesting questions being asked. The 6th Nursten Symposium will be held in Nottingham in 2018, so I would recommend coming along to present!