Could graphene solve the water shortage?

Water scarcity is a truly global problem, affecting each continent and a total of 2.8bn people across the world. By 2025, 15% of the global population will not have access to sufficient water resources.

Water usage is expected to grow by 40% in the coming 20 years as demand grows from industry and agriculture, driven by accelerating population growth and increased urbanisation.

Insufficient water supply affects the health of children disproportionally, as a decrease in food and nutrient intake can lead to problems with growth and an individual’s immune system.

A shortage of water can lead to communities relying on poorly sanitised water, allowing infections that can cause diarrhoea and intestinal parasites. Both can be deadly in areas without access to quality healthcare.

But it is not only a scarcity of clean drinking water that presents a global health challenge – the agriculture industry relies on an increasing supply of fresh water for food production. It is estimated that the number of crops such as wheat, rice, and maize will decrease by 43% by the end of the 21st century. 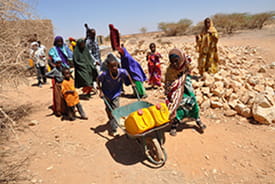 Agriculture accounts for 70% of the world’s water use, and is constantly competing with domestic and industrial uses for an already dwindling water supply. The World Wildlife Fund for Nature claims that many countries, such as the US, China, and India, have already reached their renewable water resource limits.

The most popular current desalination methods – the process by which salt and minerals are removed from water – are thermal and membrane desalination. Both are energy-intensive and often not cost-efficient for developing countries, which are the most likely to struggle with poor water sanitation and shortages.

As a result, both the healthcare and agricultural industries are desperately searching for a solution.

In Manchester, UK, the development of graphene – a material comprised of a single-layer of carbon in a honeycomb structure – is revolutionising modern membrane desalination and water filtration techniques. 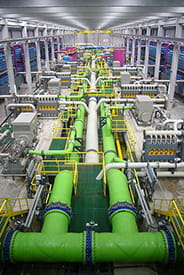 An ultra-thin graphene-oxide membrane developed at the University of Manchester is not only able to separate water and salt – proving to be completely impermeable to all solvents but water – but other compounds as well.

The technology – called organic solvent nanofiltration – separates organic compounds by charge and can differentiate solvents by the nanometre. The group tested the membranes using alcohol, such as whisky and cognac, and various dyes with successful results.

‘The developed membranes are not only useful for filtering alcohol, but the precise sieve size and high flux open new opportunities to separate molecules from different organic solvents for chemical and pharmaceutical industries,’ said Rahul Nair, team leader at the National Graphene Institute and Professor of Chemical Engineering and Analytical Science at the University of Manchester.

‘This development is particularly important because most of the existing polymer-based membranes are unstable in organic solvents, whereas the developed graphene-oxide membrane is highly stable.’ 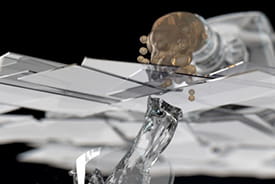 The graphene-oxide membrane is made up of sheets that are stacked in a way that creates pinholes connected by graphene nanochannels. The structure forms an atomic-scale sieve allowing the flow of solvents through the membrane.

Not only is the technology able to filter smaller molecules than existing filtration techniques – it also improves filtration efficiency by increasing the solvent flow rate.

AI solutions have the potential to accelerate scientific research