How hydrogels are changing treatment

Biocompatibility in the development of new medical treatments is becoming increasingly important. Implants are traditionally made of materials foreign to the human body – from titanium to silicone – that can cause issues with system toxicity that may lead the body to reject the implant.

Like the human body, a significant proportion of the make-up of hydrogels is water – 90% compared to the body’s 60% – making them a viable modern alternative to the current standard of implants.

At the moment, focus is on the development of hydrogels in drug delivery systems, although its potential stretches further.

One such example of hydrogel innovation was developed by researchers at the University of Michigan, US, and the University of Fribourg, Switzerland. Finding inspiration from the electric eel, the team created a flexible electrical device that could be used as a power source for implanted health monitors.

The electric eel generates power using transmembrane transport, whereby ion channels control the passage of cations and anions through the membrane in the eel’s electrocytes.

At rest, these ions cancel each other out. However, when triggered, the cation channels become more permeable, shifting the overall potential across the cell. In these instances, the eel can produce up to 600V of electricity.

‘The electric organs in eels are incredibly sophisticated; they’re far better at generating power than we are,’ said Michael Mayer, co-author and Biophysics Professor at the University of Fribourg. ‘But the important thing for us was to replicate the basics of what is happening.’ 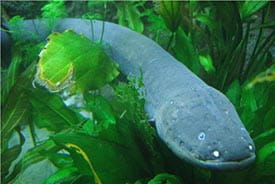 Firstly, the group dissolved sodium and chloride in the hydrogel and layers built by printing thousands of droplets of the salty gel these were alternated with hydrogel droplets of pure water. Each type of droplet could only conduct cations or anions.

Pressing cells together created a concentration gradient which is stimulated by an external electric current, creating a system similar to the electric eels.

By stacking 2,449 of these cells, Mayer says the hydrogel produced 100W, but the nature of the hydrogel’s internal resistance means the outputs of the cells is only 50µW. The team are now working to improve its efficiency.

‘Maybe the most obvious thing to think as a next step would be to try in some creative way to tap into the existing ionic gradients within the body. Much better of course would be a design where one could tap into metabolic energy to keep an artificial organ always charges,’ said Mayer.

‘That would be the ultimate achievement, but that’s very difficult to reach and we have not approached that part of the problem.’

A common effect of diabetes is the appearance of chronic wounds, particularly in the lower extremities. Working with hydrogels, a group from Rice Univeristy, US, have developed a system for the timed release of immunotherapy drugs.

The multidomain peptide (MDP) hydrogel undergoes cell infiltration – when cells migrate from their origin – upon implantation, triggering an inflammatory response that leads to regeneration of the damaged tissue.

Currently, treatment of chronic wounds involves the removal of any necrotic tissue, followed by the dressing of the wound. ‘Various treatments and materials may be tried, but oftentimes, everything fails, which can lead to amputation,’ said Nicole Carrejo, lead author and Rice graduate student. 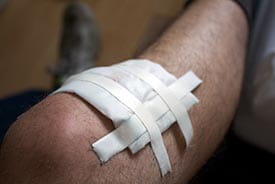 Initial results have shown the hydrogel significantly accelerated healing of the wound – up to twice as quickly – and is capable of healing the wound by itself.

‘Unlike our MDP hydrogel, the control hydrogel goes not get infiltrated by cells,’ said Carrejo. ‘Although the control results in the healing of wounds, we believe cellular infiltration of our MDP helps lead to the acceleration of wound healing.’

‘This is particularly exciting because the study shows our material has an effect that’s positive and better than things already out there,’ said Jeffrey Hartgerink, professor of chemistry and bioengineering at Rice. ‘This has been a long time coming.’