As part of the proceedings of the Annual General Meeting of the Construction Materials Group (CMG) held on 9 May 2019, Iren Jasko was presented with the George Bessey Award for her considerable and sustained services to the Group over many years as committee member, meetings organiser, group chair and currently group secretary.

In making this presentation CMG Chairman, Dr David Crofts, said it was a great privilege to recognise that it was loyal members such as Iren that had sustained the Group for more than 85 years.

Iren thanked the Group for the honour and said that membership of the Group and the Society had brought her many rewards in professional contacts, cooperation within the construction industry and long-standing friendships. She had chosen to spend the award on three items of Litracon translucent concrete — a table lamp, an ornament and a jewellery pendant – all to remind her of a lifetime concerned with cement and concrete materials.
Originally the Road and Building Materials Group, the change of name to the Construction Materials Group was to acknowledge the wider interests of materials in modern construction.

The George Bessey Award originates from the overwhelmingly successful International Symposium on Roofs and Roofing held in 1983, which produced an unbudgeted monetary profit that was used to purchase a medallion for the chairman and to establish an award fund for the group. As it was the 50th anniversary of the group it was called the Jubilee Award. Some years later, SCI asked the CMG to relinquish the Jubilee name and so the award was changed to The Construction Materials Group Award. 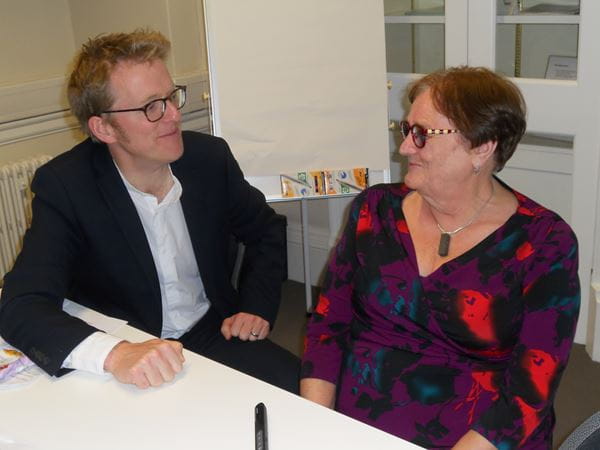 More recently, the Award was renamed the George Bessey Award. George Bessey was a long-time, keen supporter of the group, committee member, chairman and organiser of important International symposia. He was an early member of staff at the Building Research Station, Garston, and then became the first Director of the Chalk, Lime and Allied Industries Research Association. George was a staunch supporter of British Standards in the construction industry and a meticulous and skilful chairman of committees. His name was chosen for the CMG Award from a ballot of group members.

Awardees are selected by a special Committee comprised of three past-chairmen of the group and the award is of a Society Certificate plus a tangible memento selected by the awardee. Criteria for an award are wide, but include excellence in a technical presentation at a group meeting, scientific merit of a published paper or outstanding service to the group organisation.

Litracon materials are made with layered light-transmitting optical fibres embedded in a fine cementitious matrix. Only about 4% fibre is needed to create sufficient translucency to make shadow images visible through the concrete. The material is the invention of a Hungarian architect Mr Áron Losonczi. Litracon materials can be used in construction to allow light into a room or for illumination of the outside walls from lights in the interior of a building, and it can also be used to fabricate unusual decorative and jewellery items.