Sir Andrew Witty was hugely honoured to be the recipient of the SCI 2019 Society Medal.
Rebecca Aris

Sir Andrew Witty was awarded the 2019 Society Medal at an invite-only dinner held on the 12 February 2019 at the Palace of Westminster, London, UK, hosted by SCI President, Neil Carson OBE.

The awarding of the Society Medal to Sir Andrew Witty, CEO of US firm Optum and former CEO of GSK, UK, highlights the importance of science-based innovation to the UK, and was attended by key guests, including the Rt Hon Greg Clark, Secretary of State for Business, Energy and Industrial Strategy, UK and the Rt Hon Chi Onwurah, Shadow Minister for Business, Energy and Industrial Strategy, UK.

‘The Society Medal, which was established in 1896, is SCI’s most prestigious Medal and it remains the longest standing award given globally in recognition of outstanding contributions to leadership in innovation, which is crucial at a time when more investment is needed in research & development across the globe’ said Neil Carson. ‘The Society Medal marks outstanding merit in furthering the connection between science and business’. 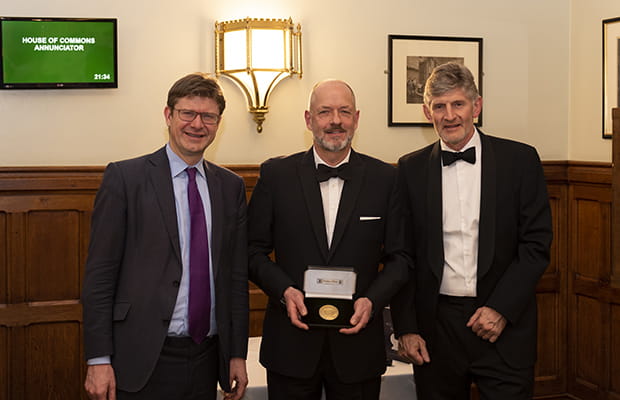 As CEO at GSK, Sir Andrew Witty brought several new products to market and launched ViiV healthcare in 2009, whilst continuing to invest in R&D. He also achieved various philanthropic objectives, such as lowering drug prices in poorer countries, built collaborations with Universities and was Chancellor of the University of Nottingham from 2013 to 2017.

At the event, Sir Andrew Witty addressed the audience made up of CEOs from industry, leading academics and senior politicians, with a speech in which he reflected on scientific advances since the inception of the SCI Society Medal in 1896.  Andrew referenced science-based inventions from that time including the invention of the escalator, Daimler introducing the first truck and the discovery of the link between emissions of carbon dioxide from the burning of fossil fuels and other combustion processes with global warming.

The human potential today, he noted, is so much greater than when the medal was introduced at the end of the 19th Century. This year already, he highlighted, we have seen man land on the dark side of the moon and developments in in vivo gene editing.

On looking ahead, Sir Andrew Witty noted that Brexit is not something that the UK should be afraid of, it does not have the potential to do as much harm as the 2008 financial crisis and – whatever the outcome – the UK will be able to find a way forward.

Reflecting on his time at GSK, Sir Andrew Witty observed that under his tenure as CEO, £36bn was spent on R&D, and that the challenge was to spend this money intelligently.

‘It is entirely right and fitting that we are celebrating Sir Andrew’s contribution today,’ Greg Clark said, in his address to the audience. He spoke of Sir Andrew’s achievements and the ‘R&D powerhouse’ that GSK became under his leadership. 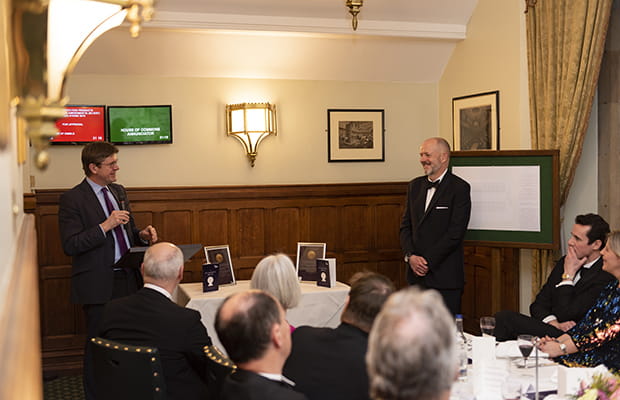 Greg Clark made reference to the inception of SCI ‘At their very first meeting in 1881, the SCI’s president Professor Roscoe hoped that the Society would act as a bond of union between individuals engaged in related pursuits giving them a personal interest in one another.
And by coming together at events like tonight with SMEs, big firms, academics and politicians and honouring leading figures like Sir Andrew I have every confidence that we will rise to this challenge.’

‘Our awards and medals reflect SCI’s charitable objectives by rewarding research excellence that is shaping the future of society through the delivery of practical solutions for public benefit,’ said Sharon Todd, CEO of SCI. ‘The 55th Society Medal Dinner provided a unique opportunity for networking and exchanging views at this critical time in the UK’s history, just one month before the UK is due to leave the European Union,’

Speaking of being the recipient of the award, Sir Andrew Witty felt that the medal was a huge honour and he thanked SCI for awarding it to him.