This month we see four new initiatives; this Newsletter now appears as a web page on the SCI website; the Horticulture Group Forum has become an open forum viewable by all; we now have a Facebook Group and finally, Alison Foster has agreed to provide a 'Plant of the Month'. We hope these changes make the Group more interesting and accessible. Those who would like to continue to receive this Newsletter in a form that can be printed off can still do so. Please email the Editorial team at scihortigroup@btinternet.com.

I never thought I'd have the chance to go back to Ghana. For me it was a magic land – a memory of sunshine, when English winters chilled the marrow. Last time I was there, my father worked for the Colonial Medical Service; first up in the Sahel; later in the centre of the country, before the River Volta was dammed. He coined the name 'River Blindness' for a disease caused by the mini-worm that affected thousands of the population.

Ghana is a rectangle; its base on the Atlantic coast and its top end butting on to Burkina Faso. So we're talking about a transition from tropical forests to the flat-top acacias of a semi-desert region.

In the 1950s it would take a couple of days to travel north from Accra on iron-red laterite roads. They're better now. The pot-holes are no worse than our own, after the snows. Nowadays a 4x4 takes you easily north from the coast, past an endless ribbon of coconut palms, plantains and cassava plants.

Now, as then, there will always be fruit and vegetables. People grow tomatoes, 'garden eggs' (aubergines); tomatoes; okra. Whatever works – and most crops do. Everyone has a plot to cultivate the carbohydrate staples; yam and cassava are beaten into a glutinous pulp and offered as moulded masses. Think St Agatha …

Travel along any road and each village has fruit and vegetables on offer; neatly stacked in fours or tens. Stop off; you can buy pineapples, tomatoes, small, sweet bananas and oranges. Ghanaian oranges have an unappetising green-yellow skin, but taste fantastic. Vendors hack off the peel and slice them however you wish; whichever way, you still land up dribbling juice all over everywhere.

There are mangoes too; but I doubt they're local. The fruit of indigenous mango trees smell strongly, and taste (if you get that far) of turpentine.

One thing that puzzled me was the lack of onions or garlic on offer at the roadside. Both are major ingredients in West African cuisine. I spent time at a guest-house on the coast - still none. But then I visited Kumasi's huge Kejetia market – a mega-maze. Walk through it and you can buy almost anything you want: jewellery; shoes; clothing (buy back the items you put in those charity bags)

Finally, onions, chillies and every other kind of vegetables are on offer; a huge variety of dried beans on sale under a vast stuffy awning.

Here's where horticulture is on sale – along with fresh and dried fish … and finally, garlic … yes; in little nets, from Poland! But somewhere there must be feral garlic. I wish I'd found it. 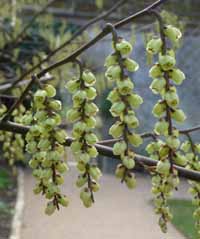 With racemes of flower buds that have been tantalising us for months, this beautiful spring flowering shrub has finally opened its delicate bell shaped flowers. They look almost like strings of pearls against the rich dark red-brown of the bark. Native to the mountains of Japan, it is definitely at home in shrub borders here in the UK. This species is deciduous offering a second season of interest when the leaves turn a golden red in the autumn.

The genus name, Stachyurus, is descriptive of the inflorescence, meaning spike (stachys) and tail (oura) which in turn gives a common name of spiketail. Praecox means very early (and is where the word precocious comes from).

All the books say that this plant prefers moist neutral to acid soil but I have seen it growing very happily in neutral to alkaline soil too. It performs best in a slightly sheltered situation in soil that remains moist all year round. Do you have one in your garden?

EU approves GM Crops
The European Commission has approved a series of genetically-modified crops, including a selection of maize varieties and a potato named Amflora. The approvals mark the end of a 13-year deadlock in which no GM foods were given the green light by law makers in Brussels because of the strong anti-GM sentiment in some parts of Europe. (Horticulture Week, 3 March 2010)

BPI Expands
British Polythene Industries (BPI) is expanding its Ardeer plant in Ayrshire to meet demand for plastics in agriculture and horticulture. A new production line, worth £4.5m, has a capacity to produce more than 15,000 tonnes of plastic each year, and is capable of producing films up to 25m wide. BPI supplies horticultural films designed for growers from the UK to North Africa including field tunnel covers, greenhouse films, crop covers and mulch films. More

Psyllid approved on knotweed
Defra has announced its approval to release the sap-sucking psyllid, Aphalara itadori, to stop the spread of Japanese knotweed. The first releases of the psyllid, at a few closely monitored sites, could happen by the summer.

Using a psyllid to act as a natural form of pest control, will be the first time that a solution like this has been used to help control the spread of a non-native invasive plant in Europe. Currently it costs the UK economy over £150 million a year to control and clear the plant. (NFU Horticulture and Potato News, 22nd March 2010) More

Cleaner Seed Potatoes
The Scottish Government has amended the legislation governing seed potatoes and other plant materials, to take action on a new bacterial pathogen in the genus Dickeya a close relative of Dickeya dianthicola which causes blackleg- like symptoms in the growing crop with leaf wilt and soft rots in tubers. Symptoms may vary but even mild symptoms in the plant can lead to severe rots in the tubers.

Angiosperm success explained
A new study which suggests that angiosperms are the Earth's most numerous & dominant land plants due to the complex vein systems that have evolved in their leaves. Previous theories attributed their success to flowers facilitating successful reproduction. More

South American visitor
South American Tomato Moth, Tuta absoluta, is arriving in the UK from Europe where it is causing widespread damage. The biggest problem appears to be the moth 'hitching a lift' on boxes and crates so one way to reduce the risk would be to change to non-returnable boxes or tray washing. A variety of strategies are being adopted to minimize its transport into the UK and to eliminate it where it takes hold (The Commercial Greenhouse Grower, March 2010).

Citrus Longhorn Beetle Update
Regulations have been tightened. Watch out for this beetle especially on Japanese maple.

No Rhododendrons
The Forestry Commission is investigating further outbreaks of Phytophthora ramorum in SW England on mature Larix kaempferi amongst others. Most worrying was that in some cases there were few or no rhododendrons present. Previous tree infections have only been found near infected rhododendrons.

Carnivorous Capsella
Kew research has found that shepherd's purse, Capsella bursa-pastoris, has carnivorous seeds! The seeds secrete a cocktail of chemicals which seem to attract a large variety of small invertebrates, kill them with toxins and then digest them with enzymes to create a nutrient rich area around the seed. This gives the emerging weed plant an advantage over its competitors. More

New Bio-insecticides
Fargro has released a new bio-insecticide Naturalis L, based on the insect pathogenic fungus Beauveria bassiana. It is claimed to give good control of whiteflies and spider mite, and moderate to good control of western flower thrips and aphids. It is safe to use with a wide variety of beneficials and can be tank-mixed with some fungicides. Another new biocontrol agent, for compost incorporation, is for vine weevil control, and is claimed to have at least 12 months activity. It is also based on a fungus Metarhizium anisopliae, and availability is expected later this year. The integration of Naturalis-L into these chemical-based programmes will help reduce this risk, and help to preserve the activity of insecticides for the longer term (The Commercial Greenhouse Grower, March 2010)

Fruit Solutions
Agrovista is developing solutions to some historical problems facing fruit growers. The first, Transend, uses new adjuvant technology to increase primary season scab control, and particularly on surfaces where it is difficult to get fungicide to stick and be effective. Its use has boosted standard fungicide disease. A second product, Companion Gold, has been developed to reduce drift, buffer pH and provide anti-foaming properties. (South East Farmer, March 2010)

Microleaf herbs WOW
Innovation is continuing to flow through the herb industry, as microleaf herbs become more and more important. HumberVHB markets the British-grown WOW! Microleaf, which has enjoyed exposure on cookery programmes. A website has now been launched to help widen the message. (Fresh Produce Journal, 26 February 2010) 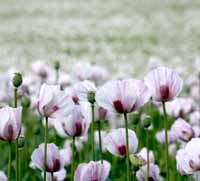 Opium Genes Identified
Researchers from the University of Calgary in Canada have discovered the genes that allow the opium poppy to make codeine and morphine, which could lead to genetically engineered plants or microorganisms generating the painkillers. Opium poppy remains the world's dominant source of codeine, morphine and another opiate called oxycodone, according to the study, published in Nature Chemical Biology.

Three new practical qualifications will be introduced at Levels 1, 2 and 3. Based largely upon shared units developed from the National Occupational Standards, they will be assessed by the approved centres using RHS assessment criteria.

The Learning Skills Council (LSC) and its successor, The Skills Funding Agency (SFA) says that, from August 2010, it wishes to focus public funding of priority qualifications on the QCF. These 'will be full target-bearing Level 2 and Level 3 qualifications which sector organisations have advised the LSC/SFA should be funded'.

For those of us more familiar with plants, reading the proposals has something akin to 'life in another language'. In many ways it will offer a way forward for those who could never achieve the current Level 2 science based syllabus but who may be able to gather some foundation credits and beyond. This may be a good thing. In addition QCF qualifications will be validated through the European Qualifications Framework.

Quote of the Month

'Whenever science makes a discovery, the devil grabs it while the angels are debating the best way to use it'

Other Events that may be of Interest