We have now received both reports from last year's David Miller Travel Bursary Awards. Catherine Cutler spent time in Australia 'Exploring the Flora of the South West' of the continent and the conditions they are used to. Her report can be downloaded from here. Our other winner Carrie-Anne Twitchen earlier reported on her trip to Quebec City, Canada to attend the 8th International Strawberry Symposium. Her report appears here. Our grateful thanks go to our sponsors, the Eric Gardener Memorial Fund, Vitacress, SCI and The Eden Project for their generous support as a result of which each winner has received £500 towards their travel costs and a year's free membership at the Eden Project.

Applications for this year's David Miller Travel Bursary Awards are now open and must be submitted by 17 April, 2017. Full details on how to apply can be found here.

This month sees the annual Cannington Conference organised by the Professional Horticulture Group South West. This will be held at the Cannington Campus of Bridgewater & Taunton College on 9 February. Four speakers will discuss 'Horticulture and Brexit'.

In December we joined the Professional Horticulture Group South West for their annual Christmas lunch at Lackham College. Before the lunch Liz Copas, Cider Pomologist at Long Ashton Research Station and Orcharding Advisor for the National Association of Cider Makers for many years, gave a talk on the history and latest developments in the cider industry. A report appears below 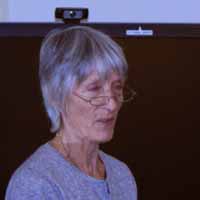 After a career at Long Ashton as a cider apple specialist Liz Copas (pictured right) retired in 2003 when the research station closed. Her intention to leave cider behind, make a clean break, and pursue other hobbies did not last long. Apples started arriving to be identified and she was in demand for advice on new orchard plantings etc. Thirteen years later she is still well occupied.

Cider has been one of the success stories of UK horticulture. In 1970 cider production was around 1.5 million hectolitres (hl), today after peaking at around 10 million hl it is around 7 million hl (over 150 million gallons). It is however very much an English drink as around 45% of all cider is made and drunk in the UK.

Today’s industry is in two parts. Firstly the big producers making the ‘national’ ciders that are sold in supermarkets and pubs around the country and secondly the smaller specialist makers mostly selling to a few local outlets.

The larger producers are generally producing the semi-sweet, low tannin products that appeal to the majority taste. The public also wants plenty of alcohol so they tend to have around 5-6% alcohol content. However, as Liz pointed out, the character that distinguishes cider apples from desert apples is their tannin content so smaller producers tend to produce ciders with a higher tannin content. The larger producers can also concentrate the raw apple juice and store it for later use or even export it to other countries like the Americas.

Older cider orchards are similar to dessert apple orchards with standard trees widely spaced. However newer orchards are laid out as hedges making establishment quicker and enabling machinery to be used for the majority of management and harvesting operations. These are the orchards aimed at supplying the big producers who are frequently supplied on contract. Each tree in the row, while spaced to allow light all round, is a single main stem with relatively short side branches from quite low down. They will be pruned in summer with reciprocating cutters to remove branches growing across the avenues and allow more light in. Harvesting is fully mechanised with shaking machines grabbing and shaking each tree to shed to the apples which are then swept up by further specialised machinery.

Breeding has also helped with orchard establishment. While traditional orchards might produce 5ton of apples per acre after 10 years a modern orchard, using newer varieties and modern planting techniques like satellite navigation and the latest pruning and fertilising techniques, can produce 10 ton per acre after 5 years.

The smaller producers will collect apples from wherever they can; from old orchards and surplus from larger orchards. Liz painted a picture of cider producers roaming the country in their wagons searching out their supplies. One incentive for the smaller producers comes in the form of taxation. Normal ciders attract 38.87p duty per litre but producers making less than 70hl (15,000 gallons) each year are exempt from tax. Needless to say many ensure they make no more.

The flavour of these ciders varies between regions. Hereford ciders have a high tannin content while Dorset ciders are similar but have a sharper taste. This sharpness becomes even more pronounced as you move west into Devon and Cornwall.
One gets an idea of how many such small producers there are at the industries showcase, the Royal Bath & West Show. Here, as well as promoting cider, judges can be faced with over 500 ciders to taste and pass judgement on. Not all will be winners but they provide visitors to the show with an idea of the range of styles and flavours available.

The cool temperate rainforests of Victoria and Tasmania are home to the tallest flowering plant and one of the tallest trees in the world – the taller trees being conifers and therefore gymnosperms rather than angiosperms.

The corner stone species of these forests, Eucalyptus regnans, known in Victoria as mountain ash and in Tasmania as stringy gum, can grow to more than 100m in height. The majority of today’s forests are composed of trees up to 65m tall. Major wildfires in the 1930’s destroyed large tracts of forests and the trees today have regrown from the soil seed bank since then. These plants do not re-sprout after fire.

The current tallest trees of this species are all in Tasmania. The tallest living tree has been named Centurion and is currently measured at 99.6m tall.

Unsurprisingly these mountain ash forests have been estimated to store more carbon when mature than any other type of forest.

This species was first described in 1871 by Ferdinand von Mueller. Mueller was born in Germany in 1825 and studied pharmacy and botany, obtaining a PhD in 1847. Shortly after this he left for Australia with his sisters, initially working as a pharmacist in Adelaide. He moved to Melbourne in 1851 to open a chemist’s shop but had already been botanizing around Adelaide and contributing papers to German periodicals and the Linnean Society of London. In 1853 he was appointed government botanist for Victoria and subsequently established the National Herbarium of Victoria.

Mueller described many hundreds of species of Australian plants, naming them for over 650 different people – with some people being honored in more than one plant.

Logging has also contributed to the removal of some of the tallest specimens of this species. The timber is valued as a premium Australian hardwood, being used for construction as well as indoor uses such as flooring and paneling. The timber is known as Tasmanian oak or Victorian ash depending on where it is sourced from – both names quite misleading botanically!

Medicinal plant (Product) of the month

The essential oil distilled from the leaves of Eucalyptus plants has widespread used – many of which are medicinal, but it also has applications in industry and the perfumery business.

The major component of eucalyptus oil is cineole, and to be pharmaceutical grade the British pharmacopoeia states that it must have at least 70% cineole content. Blue gum (Eucalyptus globulus) is the major source of the oil, but E. kochii and E. polybracteata have higher cineole content in their oil – up to 95%.

Australian aboriginals use eucalyptus leaf infusions to treat colds, fever and body pains and early colonists also made use of the essential oil.

The eucalyptus oil industry was started after Joseph Bosisto a British born chemist working in Melbourne became friends with Baron Ferdinand von Mueller. Joseph Bosisto was already interested in the many uses of the eucalyptus plant but Mueller encouraged him to make this a commercial concern. A distillation plant was set up by Bosisto in 1852 near Dandenong Creek – making him the first person to produce the oil commercially. Bosisto’s eucalyptus oil first made it to Britain in 1865, the Parrot Brand was registered in 1896 and is still sold today.

The oil has been shown to have antiseptic properties and can also be used as an insect repellent and biopesticide.

Two different views of the chemical structure of cineole

News from our Associates

CHA is organising a second UK stand at Fruit Logistica, 8-10 Feb 2017. For details of exhibiting and grants available visit the CHA website.

The Royal Society of Biology submitted evidence to the House of Commons Science and Technology Committee, and suggested two areas for scrutiny: Managing Conflicts of Interest and the

E-Nose to sniff out plant disease
An electronic “bloodhound” that can sniff out plant disease will soon be available to the agricultural industry. Called an E-Nose, this equipment was developed to detect crop pathogens by smell, even weeks before any infection is visibly apparent. E-Noses may even be able to give arable farmers as much as a two-week head start when it comes to controlling a wide variety of plant diseases (including fungi, oomycetes, bacteria, viruses and nematodes) Early trials have shown the technology to be able to detect particularly destructive fungus-like organisms, including potato blight, which is considered one of the more devastating agricultural crop diseases. More

Common adjuvant makes bees susceptible to virus
A chemical adjuvant that is thought to be safe for boosting the performance of pesticides, makes honey bee larvae significantly more susceptible to a deadly virus, according to researchers. They found that the commonly used organosilicone adjuvant, Sylgard 309, negatively impacts the health of honey bee larvae by increasing their susceptibility to Black Queen Cell Virus. The results mirror the symptoms observed in hives following almond pollination, when bees are exposed to organosilicone adjuvant residues in pollen, and viral pathogen prevalence is known to increase. More

Duckweed omlette, Sir?
Wolffia globosa, a tiny, rootless duckweed has what it takes to achieve great things. Researchers investigated the potential of various duckweeds as a human food source. The results are very promising. The protein content of duckweeds is comparable to that of lupins, rape or peas, with a protein yield of 30 per cent of dry weight. What is more, these tiny plants contain valuable omega-3 fatty acids such as stearidonic acid and alpha-linolenic acid. Possible uses for duckweeds would be in the ever-popular smoothies or gluten-free baked goods. Duckweed multiplies very rapidly, but does not require any additional cultivable lands. In view of the decrease in areas of farmland, this gives duckweed a huge advantage over soya, for example. For thousands of years, duckweed species have been on the menu in Asian countries such as Thailand, Cambodia and Laos. . In the latest tests by the research group, W. globosa showed itself to be the most promising. W. globosa, which is served up in Asia in the form of soup, as a vegetable or in omelette. More

For the very latest horticultural news follow us on

Other Events of Interest:

Navigating turbulence in the produce supply chain and beyond
16 Mar 2017, Worshipful Company of Fruiterers
London, UK