Last month we joined the Professional Horticulture Group South West for a visit to some Bristol University Gardens followed by a tour of the new Life Sciences building. A report on this appears below.

On 9 July we will be visiting Canterbury to learn about the educational specialisms at Christ Church University and then move to Edward Vinson’s Sandbanks Nursery, Faversham where we will be looking at large scale propagation of soft fruit.

On 13 July we will be joining the Professional Horticulture Group South West for a visit to Dicot Gardens near Axminster followed by Frogmary Green Farm where they grow potatoes for supermarkets, maize and grass for fodder (and chickens). Details to follow.

On 14 July the SCI Agriscience Group have organised a visit to Rothamsted Research.

On 16 July we have been invited to join the Institute of Food Science and Technology for a visit to the Warwick Crop Centre to see the research being conducted there.

On 29 July we are again invited to join the Institute of Food Science and Technology for a visit to Wilkin & Sons Tiptree Farm to see the crops that go into their jams and preserves.

One such was Goldney Hall, where our visit with the Professional Horticulture Group South West began. The original manor house that still forms part of today’s house was purchased by Thomas Goldney II in 1705. He was a true merchant venturer being a major financer of the Woodes Rogers expedition that rescued Alexander Selkirk (Robinson Crusoe). He was also a major shareholder in Abraham Darby’s Coalbrookdale iron works which in 1709 had first used coke to fire the blast furnace, an act that has been credited with starting the industrial revolution.

The gardens of Goldney Hall were the creation of his son Thomas Goldney III. Inheriting the Hall in 1731 he set about modelling the garden. First he built a greenhouse later converted into today’s fine orangery to house a collection of exotic plants being brought to the city on its ships. He then created the Dutch style canal (picture to right) leading to a mount built to enclose the view but also providing a vantage point to view the river far below and, most important, its shipping. He then added a grotto lined with over 200 species of shells as well as a variety of local and imported minerals (picture middle right). Today this is a Grade 1 listed building and can only be viewed by special arrangement and then with a custodian present at all times. Other architectural features were also added along this ridge, all providing further views of the river and its all important shipping.

While the garden has a number of fine specimen trees and is still maintained to a high standard, sadly but perhaps understandably, maintaining the structures and developing the garden does not come high on the university's list of priorities. Our guide, Nick Wray, curator of the University Botanic Garden, explained that, since the limit on student numbers had been removed, numbers had grown dramatically and all available resources are being channelled into upgrading the research facilities to attract high quality researchers and students.

We then moved on to the Royal Fort Gardens at the summit of the University. The sloping lawns and specimen trees of these gardens highlighted a conundrum the university, and particularly the gardens, face. New buildings inevitably result in tree removal and the need for their replacement elsewhere. Now however one tree is no longer enough according to the planners and if this policy is not relaxed the open spaces like those afforded by the Royal Fort Gardens are doomed to gradual afforestation.

At the summit these informal gardens lead on to a more formal piazza and the new life sciences building. The landscaping was originally left to a commercial company but the botanists and horticulturists had to step in to ensure the planting reflected more closely the work they did. As usual the post planting maintenance was part of the contract and has been sadly underestimated leaving the trees on this high exposed site seriously short of water and showing severe signs of distress (picture lower right).

Our tour ended in the modern life sciences building opened only last year. As well as enviable first-rate research facilities it also houses a teaching laboratory designed to accommodate 170 students at a time who watch the lecturer and whatever he is demonstrating on large screens placed along the side of the room. Even this large room is insufficient and they already fill it twice to satisfy the expanding student demand. Indeed so great is the demand that a night shift is being mooted.

At this time of year, the incredible range of Salvias really do begin to come into their own in our gardens. With over 900 species, native to tropical regions as well as temperate areas, especially the Americas, Sino-Himalayas and south west Asia there is a huge range to choose from. In Turkey alone there are 86 species, 50% of which are endemic. 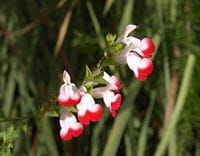 The RHS plant finder lists 1277 different Salvias, 57 of which are listed as cultivars of Salvia x jamensis. This naturally occurring hybrid was first identified by Dr James Compton on a plant collecting trip to Mexico in 1991. Dr Compton had been head gardener of CPG from 1984 to 1990. Also collected on this trip were Salvia gregii and Salvia patens ‘Guanajuato’.

The specialist Salvia nursery Dyson’s had been growing and raising Salvias for over 20 years. William Dyson focuses on the species from Mexico, Central and South America and the southernmost states of the USA and the cultivars derived from these species.

Salvias can be shrubby or herbaceous and vary in their hardiness in the British climate – from very tender to fully hardy. Many could be considered half-hardy and can be overwintered in sheltered, dry areas or with some protection over winter. The flowers are formed of 2 lips and exhibit bilateral symmetry. The leaves are often aromatic. The range of flower colour is phenomenal and they are surely some of the most ornamental plants we can grow.

To get the best out of all Salvias, grow in full sun, in well-drained soil.

Medicinal Plant of the Month 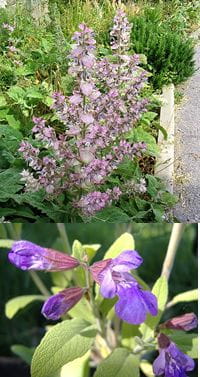 With a latin name deriving from Salveo – I heal, and Salvus – safe, well, sound, it is not really surprising that there are many salvias used for medicinal and culinary purposes in addition to those grown purely for their ornamental beauty.

The common culinary sage, Salvia officinalis, is a perennial shrub, originally from the Eastern Mediterranean and Southern Europe. In addition to its culinary uses, it has been used as an antiseptic, antispasmodic and carminative. It has popular uses against gingivitis and inflammation of the mouth and throat. It is also used as a digestive medicine to treat stomach upsets and diarrhoea.

Clary sage, or clear eye was particularly valued for affections of the eye but has also been used to treat wounds, dyspeptic, urinary and menstrual disorders. The oil is also popular in aromatherapy. This shrubby species originates from southern Europe to central Asia with commercial cultivation taking place mainly in eastern Europe, Russia and Asia.

News from our Associates

Commercial Horticultural Association
This autumn CHA will be taking groups to three shows; the Naivasha Horticultural Fair in Kenya between 18-19 Sept 2015; The International Horticultural Trade Fair at Vijfhuizen, Holland between 4-6 Nov 2015; Growtech Eurasia in Antalya, Turkey between 2-5 December 2015. Grants will be available for eligible UK companies wishing to participate and anyone interested should contact CHA.

For the very latest horticultural news follow us on

GM wheat field trial
GM wheat did not repel aphid pests in the field as was hypothesised and was initially seen in laboratory experiments conducted by scientists. The wheat had been genetically modified to produce an aphid alarm pheromone and it was hoped that this would repel aphids in the lab and field. This would allow farmers to reduce insecticide spraying, benefiting the environment and making farming more sustainable. Although the GM wheat did not repel aphids in the field, the five-year project did score some notable successes. The use of genetic engineering to provide wheat able to produce the aphid alarm pheromone (E)-ß-farnesene (Eßf) was successful and robust - this is a world first and an important proof of concept in plant science overall. GM wheat plants produced the pheromone in significant quantities without major unexpected changes seen in the appearance or performance of the new wheat plants, which looked and yielded as normal.

Eden Project launches higher education degrees
The Eden Project is set to open up its doors to prospective students after launching a range of higher education courses. The programmes, awarded by Plymouth University and delivered in partnership with The Cornwall College Group, will see students taking a degree in a range of subject areas including horticulture, garden and landscape design, event management, and performance, storytelling and interpretation.

Leaf bacteria may fertilize trees
One of the fastest growing trees, poplars, may rely on tiny microbes in their leaves to fuel their growth. For more than a decade, a lone researcher has been building a case for nitrogen fixation by bacteria living in poplar leaves. There have been many claims of nitrogen fixation in plants outside nodules where it was known to occur for more than a century. Newly reported experiments involving rice grown on nitrogen-poor soil and poplar cuttings put in air with heavy nitrogen should help convince the skeptics. In addition, another researcher finds evidence of nitrogen fixation in the needles of limber pine and Englemann spruce. If these bacteria prove to be widespread, they could be used to boost crop production on marginal soils.

Oh for the smell of broken walnuts
Why do some insects lay their eggs in some walnuts and not in others? The answer seems to be the smell given off by these nuts when they are broken, and that is why it is important to differentiate between the aromas of whole walnuts and damaged ones. Researchers have identified the volatile compounds in damaged walnuts that insects find attractive and which are threatening the harvests of these nuts in California. These are the first studies carried out on walnuts which are designed to specify the components of the aroma and which can be used to control the moth pests in the most sustainable way, besides helping to cut the use of pesticides and control agents.

EMR awarded £482K apple replant disease project
Apple Replant Disease (ARD) is a serious threat affecting newly planted apple trees, which fail to thrive in areas where apples have previously grown. EMR is collaborating with industry partners to provide detailed information about the disease, which could be used to develop new management strategies and provide significant input into breeding programmes to benefit one of the UK’s major horticultural industries. ARD is a complex disease syndrome and, until recent advances in DNA sequencing technology, it has been practically impossible to develop effective control measures against it. This new programme hopes to gain a greater understanding of the relationship between the causal agents, the rootstocks and the soil microbial populations and enable the development of effective control strategies for tomorrow’s fruit growers. More

Solving the genetic origin of beetroot pigmentation
All land plants are pigmented by flavonoids and their anthocyanin derivatives, with one exception. In the order Caryophyllales, which contains the colourful beetroot, anthocyanins have been replaced with a pigment type called betalains. Collaborative research has revealed the genetic origins of the betalain pathway. The research demonstrates that lineage-specific radiations of cytochrome P450 and 4,5-dioxygenase genes within the Caryophyllales simultaneously gave rise to new enzymatic isoforms associated with betalain synthesis. The novel isoforms likely evolved new substrate specificities that allowed them to synthesise betalains from tyrosine precursors. These discoveries open a range of possibilities with respect to the genetic engineering of betalain pigmentation. More