The answer lies in the soil

Soil is one of the fundamental supports for life on this planet. Its physical and chemical constituents supply plants with a stable rooting medium from which they draw essential major and micro-nutrients, water and oxygen.

Soil is also a living entity containing a myriad of microbes and macro-organisms such as earthworms, nematodes, insects and a range of vertebrates of varying size.

One spoonful of healthy soil can contain over 1bn bacteria, metres of fungal filaments and numerous protozoa and nematodes. Mostly these organisms are beneficial for plant growth, and only a few are pests and disease-causing pathogens.

Beneficial microbes increase soil fertility by converting organic matter into its basic constituents which are reabsorbed through root hairs. They form a sheath – a rhizosphere – around roots which has protective and supportive functions.

Some bacteria fix atmospheric nitrogen into soluble forms which are taken up by roots. Mycorrhizal fungi colonise roots, either internally or externally, providing plants with soluble forms of phosphorus.

Sustaining and conserving the worlds soils is a major challenge facing humanity. Natures biodiversity, carbon sequestration and our food supplies depend on soil. Yet, it is disappearing at an alarming rate. Half of all the planet’s topsoil has been lost to erosion, degradation and urbanisation in the last 150 years.

In Europe, alone poor land management is resulting in the annual loss of 970m tonnes of soil. Restitution is a long-term process, generating 3cm of fertile top soil may take 1,000 years of careful husbandry.

Programmes which enhance soil health and its biological activity, as well as soil quality and its capacity for yielding rewarding crops are not new. In the 1930s, Americans realised that much of their most valuable farmland was turning into unproductive dustbowls and instituted remedial programmes. More recently recognition of the dangers of global warming has focussed attention on the roles that fertile soils have in reducing the advance of climate change and diminishing the loss of biodiversity.

Forms of land husbandry which increase soil health are now embedded into the Land Stewardship Schemes which enhance farm payments. These include the over-winter retention of crop stubble, reducing the frequency of tillage, avoidance of soil compaction, rotational land use and growing cover crops particularly legumes.

Developing and maintaining healthy soils by hobby gardeners is an important means for reducing the rate of climate change and increasing fertility. In the UK, household gardens occupy 1.3m acres (~0.5m hectares) of land. Regular annual incorporation of composts, farm yard manure and other forms of decaying organic matter will have considerable benefits for soil over time.

Structure improves as the fertile crumbs that develop between pore spaces contain equal quantities of air and water. This allows easier and deeper penetration by healthy crop roots and reduces the need for artificial irrigation during extended dry periods.

Increased soil fertility encourages populations of beneficial organisms – particularly earthworms, which Charles Darwin recognised as ‘Natures ploughs’ because of their abilities for increasing soil aeration by burrowing and the release of soluble nutrients following the ingestion of soil particles.

Added soil fertility increases yields of home-produced fruit and vegetables. The availability of home-grown produce increases the likelihood that households will eat greater quantities of fruit and vegetables hugely benefitting prospects their own health which itself will have improved as a result of the exercise involved in gardening.

Home produce results from the minimal expenditure of ‘food-miles’, reducing the carbon burden. Increasing soil health either professionally or by home-production brings substantial benefits for the natural world, human society and individuals.

* ‘the answer lies in the soil’ was an aphorism coined by the Sussex born horticulturist and broadcaster, Frederick “Fred” Streeter (1879-1975). 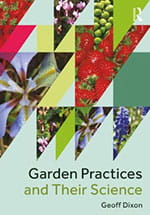 Professor Geoff Dixon is a member of SCI's Horticulture group and the author of the recently published book Garden Practices and Their Science (ISBN 978-1-138-20906-0), which provides both a workshop manual for the development of basic gardening skills and explains in simple terms their scientific basis.