Chemistry and All That Jazz

In a most unusual concert performed by the University of Greenwich Big Band, band manager Dr Fred Parrett set out to prove a surprising connection between chemistry and music.

The Big Band's repertoire of jazz, swing, and dance have developed mostly in the last century, at the same time as the dramatic and significant developments in chemistry which have improved the lives of all of us.

The multimedia presentation and band performance showed links between chemists who were musicians, musicians who were chemists, and how chemistry has helped in almost every musical instrument.

The Law of Octaves

John Newlands, a chemist in Southwark, south London proposed the Law of Octaves in 1865, a 'periodic table' linking chemistry and music.

Newlands arranged the elements in the order of their equivalents calling hydrogen 1, lithium 2, glucinum (lithium) 3, boron 4, and so on. The eighth element resembled the first one, like the eighth note of an octave in music. These were placed on the musical stave (see diagram), showing elements with similar properties repeat every eighth element, as in music.

This proved to be an important step in establishing a periodic law or table. However the concept failed when he reached the transition elements and the publication committee of the Chemical Society, the RSC's predecessor, refused to publish such theoretical concepts.

Whether John Newlands was a musician is not known, but many families at the time had a piano for family entertainment. Sir Frederick Abel, founder of the London section of SCI, certainly had one. Abel succeeded Michael Faraday in 1852 as a lecturer in chemistry at the Royal Military Academy at Woolwich. In 1854 he became ordnance chemist at the Royal Arsenal Laboratories, Woolwich, and chemist to the war department.

Abel was a talented pianist and was ever ready to play the accompaniments, or give exquisite performances on the grand pianoforte at many of the earlier dinners and festivities of the chemical societies.

One of the most renowned figures to combine chemistry and music was of course Prof Alexander Borodin of St Petersburg (1833-1887), who became a composer later in his life.

Borodin's music would not be nearly so well known today were it not for Robert Wright and George Forrest. These Broadway 'talents' waited until the copyright on Borodin's music had lapsed, then appropriated it for the 1953 stage show Kismet.

We are more likely to know Borodin's music from Stranger in Paradise or Baubles, Bangles and Beads (played by the band), rather than as an excerpt from the Polovtsian Dances from his 1860 opera Prince Igor or his Second String Quartet. Borodin's estate did not see much of the money made by Wright and Forrest from this musical.

Early in the 20th century, Sir Edward Elgar built a career as a classical composer, and also became a serious amateur chemist, building a laboratory in the garden of his house in Worcester in around 1900- 1912. It is frequently reported that he invented and patented an apparatus to make hydrogen sulphide gas.

A letter survives from Phillip Harris Ltd in Birmingham confirming the device was to be manufactured, but there are no patent records in Elgar's name. It is also unlikely a patent would have been awarded, since the well-known Kipps apparatus, invented over 60 years earlier in 1844, was already widely used.

To honour the music of Elgar the band played a Big Band version, in a Bossa Nova style the Salut d'Amour, which he wrote in 1898 as an engagement present to his future wife, Caroline. 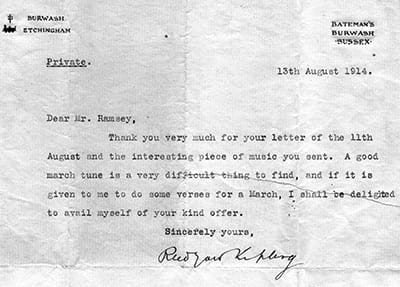 Ramsay was awarded the Nobel prize in 1904  for discovery of the noble gases. Professor of Chemistry at University College London, he also had a reputation as a musician and a poet.

The archives at UCL have a letter (see illustration) from Rudyard Kipling to Ramsay, offering to add some words to a march that Ramsay had composed and sent to him. Unfortunately this has not survived.

After the First World War a basic commodity chemical made one of the greatest contributions to the development of jazz and big band music. In the USA, the ban on alcohol, from 1920 for ten years known as prohibition, had the reverse effect to that intended. Before prohibition, few, if any women drank in bars. However, women often drank in New York clubs known as speak-easies. Prohibition indirectly furthered the cause of jazz. The cellars of New York City become riddled with speak-easies providing numerous opportunities for jazz musicians.

It was during prohibition that one of the greatest band musicians and bandleaders appeared in New York. Fletcher Henderson was a chemist who graduated from the University of Atlanta in 1902, He moved to New York with the intention of studying for a Masters degree. However he was already a talented pianist, and he began to play in bars and clubs, and soon became a sought- after player for the many bands in the speak-easy scene.

To recognise Fletcher Henderson's contribution the band played two of the arrangements originally performed by the Benny Goodman Orchestra, Oh Look At Me Now and What A Little Moonlight Can Do For You.

Just before World War Two it was a former Harvard chemist, Wallace Carothers, working for Dupont who discovered nylon. Its uses are many, but its impact on music has dramatically improved life for musicians using stringed instruments.

Before nylon, guitars, banjos, violins, cellos etc would use 'cat-gut' strings - actually made from cattle intestines. They were inherently unstable, being prone to breaking, affected by humidity change, including moisture from players' fingers, and needing frequent retuning. Nylon strings changed all that, being stronger and more stable.

Drum skins were originally made from cattle hide. Like 'cat-gut' they were not stable, difficult to fit to the drums, and liable to break or tear. Then along came PET or Polyethylene terephthalate which is now used for all drum skins. It is strong and stable and easy to fit to the drums. PET is the same polymer used in drinks bottles.

Brass instruments were prone to corrosion until electroplating was developed in the late 19th century. This made it possible to protect the brass from moisture, and was followed by modern coatings and varnishes to keep it bright and shiny.

The Periodic Table Song, also known as The Elements, is a classic link between chemistry and music, from a man who broke the post-war tedium with his playful yet sardonic wit. Tom Lehrer, born in 1928, is an American singer-songwriter, satirist, pianist, and mathematician. He lectured on mathematics and musical theatre, but is best known for the pithy, humorous songs he recorded in the 1950s and 1960s.

'The Elements' is without a doubt the all-time best chemistry song, and of all the many ways to sort the elements, it's clearly the most poetic. Though it's not exactly jazz, an original recording was played for the audience.

In more recent times another Nobel Chemistry prize winner was an active performing musician. William Lipscomb went to the University of Kentucky, surprisingly on a clarinet scholarship gaining a BSc in Chemistry in 1941.

He went to Caltech for PhD, with Linus Pauling, where became interested in the chemical bonding in boron hydrides. Lipscomb went on to elucidate the chemistry of boron compounds, using sophisticated quantum mechanical calculations to describe them. He received the Nobel Prize in chemistry in 1976.

Lipscomb was a performing clarinettist in classical chamber music throughout his life and played with the Pasadena Civic Orchestra and the Minneapolis Civic Orchestra. He also played at the ceremonies for the annual spoof IG Nobel Prizes for Improbable Research, held at Harvard, until his death in 2011. A video recording of him playing at the 2001 event was shown to the audience.

The concert took place at the Medway Campus, University of Greenwich on 6 April, 2014, sponsored by the SCI London Regional Group and the RSC Kent Section. A collection for Rochester Wisdom Hospice raised £1246.