On 02 July 2016 the London Regional Group held their annual social event in Kew. However, bypassing the famous Kew Gardens, the day started at 11 am at the Musical Museum with some surprise tea and biscuits. The refreshments were most welcome after the disastrous public transport experiences.

At 11:30 there was the tour of the Musical Museum excellently conducted by our tour guide, Colin. The stillness and quiet of the museum not cluttered by shopping music was wonderfully broken by the self playing instruments demonstrated. A German instrument that was an entire band in a box complete with cymbals and xylophone was a favourite. Not only did it have flashing lights and a moving windmill, but also, the back of the machine was off due to refurbishment and the workings were visible. The tour ended with the Great Wurlitzer, an organ that could allowed for the production of lots of special effects which used to be employed in theatres.

The tour of the Musical Museum over ran and everyone was enjoying it so much it seemed a shame to cut it short but it did mean that it was a bit of a dash to the ASK Italian for lunch. The people at ASK Italian were wonderfully efficient though and everyone seemed to enjoy their food. 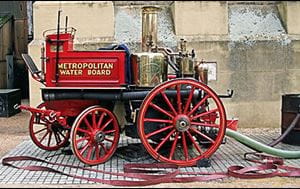 We left ASK in plenty of time to get to the Water and Steam Museum where we started the guided tour slightly earlier than billed. It became quite clear that there was not enough time to see the whole museum in detail but we got the whistle stop tour and all the highlights.

After viewing down a sewer and seeing all sorts of bathroom equipment we had a ride on a small steam train round the back of the museum. The steam train ride certainly was unexpected and brought out some people’s inner child. However, the steam pumps that were originally used to pump the water to the top of the tower were the most impressive sight at the museum as they were several stories high. Unfortunately, we had to leave as a wedding party had reserved the venue (peculiar choice). Many of us decided to come back another time and to bring our friends.