The SET for Britain Awards were established in 1997 by Dr Eric Wharton to encourage early career researchers working in Science, Engineering and Technology to interact with their MPs and Parliament and to give them a platform to showcase their research work in Parliament in the form of a poster competition.

SCI’s London Regional Group supports SET for Britain by providing funding for the Westminster Medal in honour of Dr Wharton, who served as the Group's Chairman and was an active committee member until his death in 2007.

The most recent SET for Britain Awards event took place at the House of Commons on 7 March 2016, sponsored by Stephen Metcalf MP, Chairman of the SET for Britain organising group of the Parliamentary and Scientific Committee.

The topics of the posters were wide-ranging and were split into four distinct categories; Biological and Biomedical Sciences, Physical Sciences (Chemistry and Physics), Engineering and Mathematical Sciences. 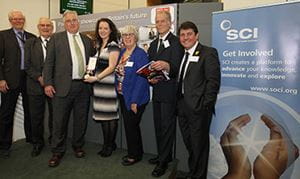 Each category had a select panel of judges, who were tasked in choosing the Gold, Silver and Bronze Awards for their categories.

Once the Gold for each category was known; a ‘super panel’ was assembled to quiz the presenters on their entries. An overall winner was then chosen to receive the Westminster Medal, given in honour of Dr Wharton.

This year, the Westminster Medal was awarded to Biological and Biomedical Sciences Gold winner, Dr Maelíosa McCrudden, from Queen’s University Belfast, for her poster entitled 'Dissolving Microneedles: A new method of painlessly delivering medications and therapeutics across the skin'. Through Maelíosa’s pioneering research, conventional hypodermic needles may become a thing of the past and injections pain free - microneedles are tiny projections on a plaster that can be used to deliver medications. Julian Perfect, SCI London Group Secretary, presented the medal on behalf of the London Group and SCI. 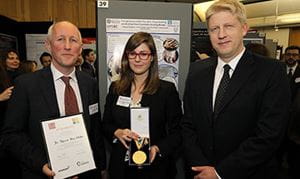 SCI would like to congratulate all the winners on their achievements, especially SCI Member (and previous Rideal travel bursary winner), Dr Patricia Pérez-Esteban who won the Gold award for the Engineering category for her work on ‘engineering a skin capillary-bed model for transdermal health risk assessment.’

For more information about the other SET for Britain award winners, please see below: