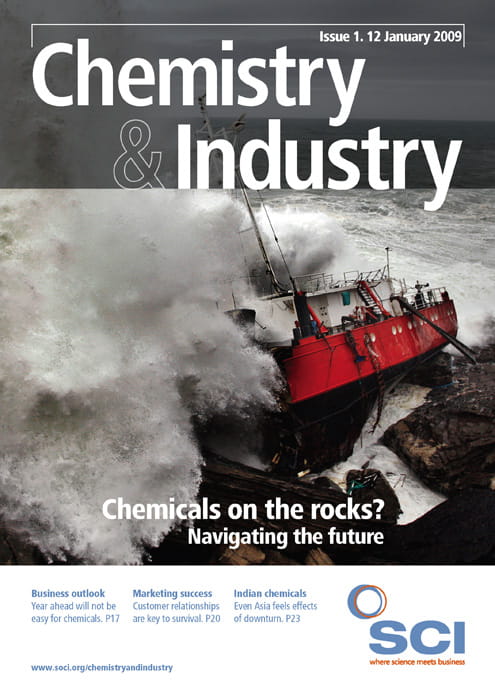 It has recently been holiday season in India; Deewali, the Festival of Lights, is the country’s biggest festival. Deewali usually falls in November, and many companies that do not want to shut down their plants pay twice the normal salary to get their employees to work. However, 2008 was an unusual year for them. Weak demand and other factors forced the chemical companies to shut down their plants periodically. ‘For the first time in recent years, we had to shut down our plant near Mumbai for ten days during Deewali,’ said Ashwin Shroff, chairman of Excel Industries India, a large manufacturer of industrial chemicals and intermediates.

Until September 2008, the Indian chemical industry had a very good time. Most companies posted excellent results in the first two quarters of the financial year – April to March – but things turned around quickly in October and November. Many companies shut down their plants at least once, sometimes citing reasons other than poor demand.

The $35bn/year revenue Reliance Industries, India’s largest private conglomerate and the world’s largest manufacturer of polyester, had to shut down its polypropylene plants. ‘These are very difficult times for India’s chemical industry,’ said R.A.Mashelkar, who is on the board of several large companies like Reliance, Thermax and Hindustan Lever.

Despite the sudden break on growth, senior managers of the large companies remain upbeat about their 2008 financial performance. Ignoring the last few months, India’s chemical industry has been on a high growth path for the last few years. In fact, many companies did so well in the first six months of 2008 that they still expect to close the financial year with good revenues and profits. ‘The industry made stock market profits in the first half of the year [2008],’ said Shroff. Reliance Industries, the torchbearer of India’s chemical industry, increased its revenue by 38% and profit by 10% up to 30 September 2008.

However, these figures could be deceptive because many companies have forward contracts. The financial results of the first half are an indication of the third and last quarters of the previous financial year. The prospects of India’s chemical industry in 2009 largely depend on global demand. The Indian chemical industry now exports more than 50% of its production; the low costs in the country have forced global companies to shift manufacturing there. Most chemical companies in India are deeply connected with the global economy, so weak demand could affect most sectors of the chemical industry, and may even force many companies into the red in 2009. If that happens, it would be a remarkable turnabout for an industry that was expecting rapid growth for the next few years.

Until the early 1990s, when India started liberalising its economy in a big way, its chemical industry was protected and operated largely to satisfy the domestic demand. Its technology was primarily imported and, with some exceptions, there was no history of innovation. After the liberalisation of India’s economy, a process that lasted most of the 1990s, India’s chemical industry began an expansion phase. It started investing in R&D and also sponsoring research in major national labs like the National Chemical Laboratory. However, for at least a decade after liberalisation, margins declined steadily. The industry started this decade with its profitability considerably eroded compared with the mid- 1990s.

The industry recovered and had expanded rapidly in the last few years. Domestic GDP has grown at over 8%/year since 2003-04. In 2007- 08, it grew 9.1%, thus making it the second fastest growing economy in the world after China. Most domestic industries did well during this period, and the chemical industry was no exception. However, the chemical industry also increased in sophistication and scale, improved its technology and started globalising through expansion and acquisitions. Cost arbitrage was an important factor that helped Indian industry grow. ‘Indian engineers are very innovative at cost savings,’ said S. Sivaram, director of the National Chemical Laboratory in Pune.

As it stands now, India’s chemical industry is worth $30bn, and contributes 3% of India’s GDP. It is the twelfth largest in the world, and accounts for 14% of India’s industrial production, and 14% of its exports. According to the Indian Chemical Council, the Indian chemical industry is growing at between 12% and 15 %, thus making it one of the fastest growing industries in India. Until the global downturn, observers expected the industry to grow rapidly in the next few years and increase its contribution to the country’s exports and GDP.

Demand in the first half of 2008 was also partly sustained by the Olympics in China. However, Chinese policies – a subsidy regime sometimes changing overnight to a duty regime – also played havoc with the prices of many raw materials. One example is elemental phosphorus, for which China is the world’s major source. Its price has swung in six months from $2000/tonne to over $8000/ tonne, after China imposed 120% duty on its exports. India imports 95% of its phosphorus from China. ‘Chinese policies have seriously begun to hurt the Indian chemical industry,’ said Ashwin Shroff.

The Indian industry had built large capacities to cater to a large foreseen international demand for chemicals, and had also built up an inventory of raw materials. These raw materials were sourced at high prices. Now the prices of the finished products have fallen to low levels, leaving them with a high priced inventory in a low priced market. The Indian currency, the rupee, has also been volatile in the last few months. It has depreciated against the dollar by about 20% in the last six months, a period that has followed a year of steady appreciation against the dollar.

So, in spite of the good performance of 2008, the Indian chemical industry is looking at a troublesome year ahead, which is why it is now putting pressure on the government to provide incentives and tax reliefs until the situation improves. There are sections of the industry, like paints, that cater largely to the domestic market. Paint manufacturers are thus less affected by the global slowdown, but the slump in the domestic construction industry is making things difficult for them too.

There is probably one silver lining in the cloud. Most companies are looking at their processes and trying to make them more efficient. United Phosphorus, to take one example, has reviewed all its processes and saved 20% of its costs. ‘We now hope that these changes will remain when the times are good as well,’ said Raju Shroff. But will they be good enough to see through the tough times?